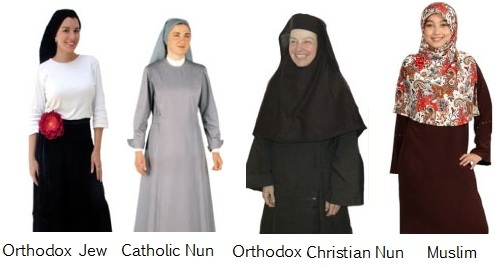 Modesty is conscious Purity; Purity is unconscious Modesty. Modesty may be known under any veil; Purity cannot be certainly known until every veil has fallen away. 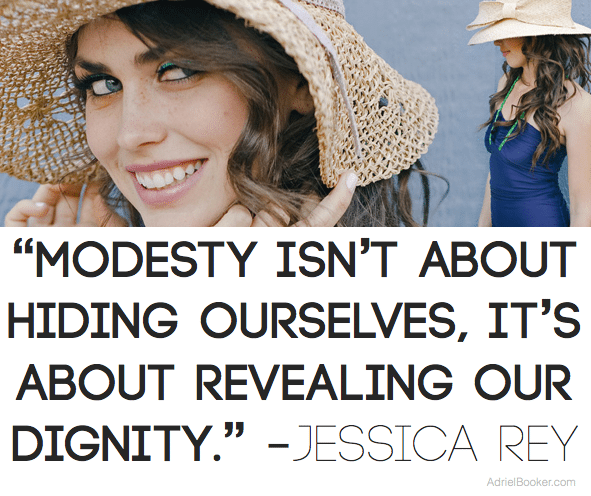 Modesty is that when you feel uncomfortable when someone praised about your good looks or how great you are. If you feel shy, you’ve got some modesty.

Modesty comes from the Latin modestus, which literally translates as “keeping due measure.” Knowing the correct measure of yourself is modesty, and when someone admires you too much, you feel reluctant and that’s modesty comes in.  Modesty also means being a demure type and  decent like wearing clothes that hide your skin and being conservative in views.(vocabulary.com) How do you define modesty?

Women today are bombarded with mixed messages about what it means to be a woman in a woman’s body. 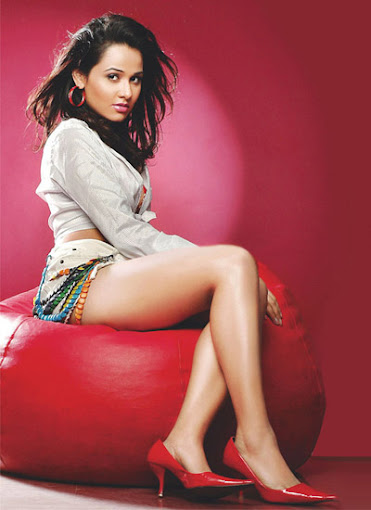 You could see in many magazines that boasts airbrushed photos  of a very thin celebrities and headlines promising to teach us how to “please our men” with sexier bodies, more fashionable clothes, hotter sex moves and better flirtation skills. Ours is indeed a culture that tends to assign value to a woman based on her sex appeal rather than her character, and that’s something we must work to change.

What about if a pretty lady passes men on the sidewalk, something inside urges them to look – not once, not twice but more. What more if the woman wears clothes showing much skin and a man felt his morality being gradually deteriorated by looking. Why was he looking?  What’s going on in his heart and mind?

Assuming for other men, this type of looking is rooted something gross: sin. It could be lust, pride, ungratefulness, or otherwise – when men look and re-look at the body of an unknown woman, she is causing men to stumble. Imagine a respectable personality staring down a woman’s body as she walks by him on the street. Do you feel anguish of lost respect for him? And this is simply because he was tempted to view a woman. Where you look affects your mind, and what affects your mind inevitably affects your heart. The concept is simple: anytime you see something that makes you want to re-look or stare, begin the lust reaction. Gracie Lawrence wrote in Islamwich.com, “And while the judgments made between women can be harsh, it is in these critical comments where we decide where we want to draw our own personal modesty line- which helps us decided what amount of coverage makes us feel comfortable ourselves and in the company we keep. And while we can all acknowledge that the degree of modesty we expect from others around us can be dependent on conditions such as age, location, place in time, it is a shame then, that what can be ridiculed is when a person’s reason for dressing modestly include an individual’s own personal convictions (spiritual or otherwise).

Millions of women ask themselves this question each and every day. Most studies show then men prefer women with an hour glass figure, and a 60 to 70% hip to waist ratio. (biblicalgenderroles.com)

For many Muslim, Christian, and Jewish women (and other faiths included)- we believe that there is a precedent in how we decide to cloth ourselves. Especially acknowledging that male biology has unlikely changed very much over hundreds of years, I can see the wisdom of generations of women before me.

But it seems that living in this day and age has caused us to lose touch with where we really would like to draw our own modesty line. Hopeful for the approval of an especially tempting potential partner, bombarded with images from Cosmopolitan and Marie Claire, and the judgment of other women,  we keep feeling the need to hush our inner voice, thereby compromising our inner values. And it is hard to be at peace when so very many of us are both physically and spiritually uncomfortable.

Why let mainstream media or others influence us and erode the confidence in our decisions?

As one Arab-American female put it “I get a kick out of Americans’ attitude that we’re all special snowflakes who dress exactly the way we want to because we embody the American ideal of freedom of expression, as if we don’t just witlessly wear whatever the stores are full of. I mean come on, pants? Sarongs would be much more comfortable.”

But it is not just a Western problem. True, the East and West both believe that they have the ideal standard of freedom and modesty, and they tend to look at each other as either tyrannical or indulgent. In a country where covering one’s face is the norm, showing a little cheek (facial) can be hot. In a place where women walk around with navels in the breeze and booty shorts, topless-ness might get some disapproving stares.

But the truth is that women generally from both ends of the world are compromising when they cover for the wrong reasons.

In the West we are proud of our individualism- modesty is a part of that. I just hope that as women, we decide where to draw our own modestly line for the right reasons and encourage others to do the same whether our standards are based on our own comfort or moral convictions -religious, cultural or otherwise. Let us contemplate the where and why of our own line, instead of imposing our judgment on others. It is in this quite space where we get back to our true nature.”(islamwich.com)

The fact is, men take responsibility of their own thoughts. A man can choose to objectify a woman whether she’s wearing a bikini or a burqa. You can stop lust by his own personal changes and by teaching him to respect women as human beings because you will never stop lust by covering up the female form.

In a two different cultures, while popular culture tends to disempower women by telling them they must dress to get men to look at them, the modesty culture tends to disempower women by telling them they must dress to keep men from looking at them. In both cases, the impetus is placed on the woman to accommodate her clothing or her body to the (varied and culturally relative) expectations of men. In both cases, it becomes the woman’s job to manage the sexual desires of men, and thus it is seen as her fault if a man ignores her on the one hand or objectifies her on the other. Often, these two cultures combine to send out a pulse of confusing messages: “Look cute … but not too cute! Be modest … but not frumpy! Make yourself attractive … but not too attractive!” Women are left feeling ashamed of their bodies as they try desperately to contort around a bunch of vague, ever-changing ideals. It’s exhausting, really, dressing for other people.

But all of this takes the notion of modesty far beyond its biblical context.

In 1 Timothy 2:9-10, the apostle Paul writes “I also want the women to dress modestly, with decency and propriety, adorning themselves not with elaborate hairstyles or gold or pearls or expensive clothes, but with good deeds, appropriate for women who profess to worship God.” The Greek word translated “modesty” here is kosmios.Derived from kosmos (the universe), it signifies orderliness, self-control and appropriateness. It appears only twice in the New Testament, and interestingly, its second usage refers specifically to men (1 Timothy 3:2). In fact, nearly all of the Bible’s instructions regarding modest clothing refer not to sexuality, but rather materialism (Isaiah 3:16-23, 1 Timothy 2:9-12, 1 Peter 3:3). Writers in both the Old Testament and New Testament express grave concern when the people of God flaunt their wealth by buying expensive clothes and jewelry while many of their neighbors suffered in poverty. (Ironically, I’ve heard dozens of sermons about keeping my legs and my cleavage out of sight, but not one about ensuring my jewelry was not acquired through unjust or exploitive trade practices—which would be much more in keeping with biblical teachings on modesty.)

And so biblical modesty isn’t about managing the sexual impulses of other people; it’s about cultivating humility, propriety and deference within ourselves. (qideas.org)

How to Value Modesty?

Anyone who looks at a woman with lust has already committed adultery with her in his heart. If men are attracted to look at the woman to what she is wearing and such attractions turns into lust, then men are responsible for their own thoughts and actions when this happens; they don’t get to blame it on what a woman is wearing.

Men must be conscious to where and what they look. Where and what men look and keep looking, says a great deal about their view of women and personal integrity. Where you look affects your mind, and what affects your mind undoubtedly  affects your heart. You may think it’s perhaps harmless to “look, don’t touch”, but is it? The eyes are a gateway to lust of all forms, so by guarding them religiously will help you to avoid any possibility of lust.

When you assume of single standards for modesty to apply to all people in all cultures, then , you are objecting modesty. What is considered modest or appropriate changes depending on culture and context. It also changes from woman to woman, depending on body type, personality, personal convictions and season in life. Like in India, where women in traditional saris exposed their midriffs and navels without a second thought, but would carefully avoid showing their knees. In Malawi, women typically nurse in public without shame of exposing their breasts. There is no universal dress code  for modesty but women should project to the world  strength, dignity and good deeds; the sort of things that transcend culture, circumstance, and clothing.

If the female form is treated as sexually seductive and questionable, then women will inevitably feel ashamed of their bodies. Our bodies are not something to be overcome; they are not dirty or shameful or inherently tempting. They are a beautiful part of what it means to be created in the image of God.

Don’t dress for men; dress for yourself. It’s not your responsibility to please men with either your sex appeal or your modesty; each man is different, so it would be a fool’s errand anyway. Instead, prioritize strength, dignity and good deeds, and then dress accordingly. It is ideal that although a man is responsible for his gaze, a woman is responsible for what you give him to gaze at. So guard your modesty.

Violence Against Women: Psychology of Rape (1)