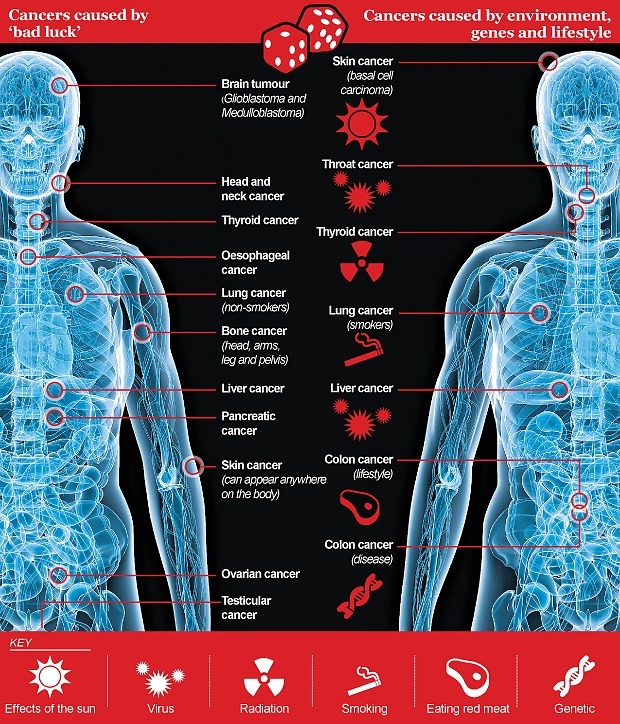 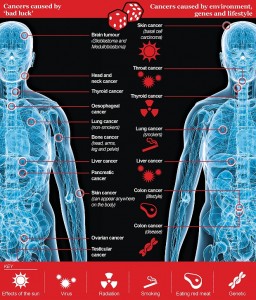 The majority of cancers are the result of bad luck rather than unhealthy lifestyles or inherited genetic faults, scientists have discovered.

For years health experts have warned that tumours are driven by a bad diet, lack of exercise, or gene errors passed down from parents.

The government even set up its ‘100,000 Genomes Project’ to try and find the genetic causes of many rare diseases and cancers.

But now a study has shown that most cancers are primarily caused by bad luck rather than poor lifestyle choices or defective DNA.

Researchers found that more than two thirds of cancers are driven by random mistakes in cell division which are completely outside of our control.

They found that the more cells need to divide to stay healthy, the more likely cancer is to develop.

It is the first time that scientists have been able to explain why some cancers are more common than others.

It explains why, for example, colon cancer is more prevalent than cancer of the small intestine, because cells in the colon divide twice as fast as those in the upper bowel.

Of 31 cancers studied by scientists at Johns Hopkins University School of Medicine in the US, just nine were found to be linked to lifestyle or genetic faults. The remaining 22 were mainly just the result of ‘bad luck,’ with DNA and behaviour only having a small impact.

The scientists claim that because it is impossible to prevent most types of cancer through behavioural changes or genetic screening, more should be done to speed up diagnosis so they can be spotted as early as possible.

“If two-thirds of cancer incidence across tissues is explained by random DNA mutations that occur when stem cells divide, then changing our lifestyle and habits will be a huge help in preventing certain cancers, but may not be as effective for a variety of others,” said Dr Cristian Tomasetti.

“We should focus more resources on finding ways to detect such cancers at early, curable stages.”

Cell division is important to renew the body and repair damage. But sometimes one chemical letter in DNA is incorrectly swapped for another during the replication process which drives the production of cancerous cells.

Scientists looked at the number of cell divisions of 31 types of bodily tissue and compared them with the overall incidence of cancer in the population of America.

They found that the more cell mutations occurred, the higher the rate of cancer, suggesting that it was the number of random errors in replication that was driving tumours rather than outside environmental forces.

For example the cells of the pancreas regenerate far more quickly than those of the pelvis, which is why pancreatic cancer is far more common than pelvic cancer.

However some cancers such as lung and skin cancer had higher rates than their mutations should predict, suggesting that genetics or lifestyle factors had increased the risk.

Lead researcher Professor Bert Vogelstein, said: “Cancer-free longevity in people exposed to cancer-causing agents, such as tobacco, is often attributed to their ‘good genes,’ but the truth is that most of them simply had good luck.

“Our study shows, in general, that a change in the number of stem cell divisions in a tissue type is highly correlated with a change in the incidence of cancer in that same tissue.

“We found that the types of cancer that had higher risk than predicted by the number of stem cell divisions were precisely the ones you’d expect, including lung cancer, which is linked to smoking; skin cancer, linked to sun exposure; and forms of cancers associated with hereditary syndromes.”

However health experts said the study demonstrates how important it is to help lower the risk of certain cancers by eating healthily, exercising and giving up smoking.

“While some genetic mistakes are due to bad luck, we know that our cancer risk depends on a combination of our genes, our environment and other aspects of our lives, many of which we can control,” said Dr Emma Smith, senior science information officer at Cancer Research UK.

“We estimate that more than four in 10 cancers could be prevented by lifestyle changes, like not smoking, keeping a healthy weight, eating a healthy diet and cutting back on alcohol.

“Making these changes is not a guarantee against cancer, but it stacks the odds in our favour.

Prof Hans Clevers, a stem cell and cancer biologist at the Hubrecht Institute in Utrecht, the Netherlands, said the research would help cancer patients to realise that the disease was not their fault.

The research was published in the Journal Science.

Haunting Images of War and Peace in Different Countries

Syrian wives and mothers left behind condemn men w...
SAGO AT GULAMAN RECIPE / SAGO MANGO CHINESE RECIPE...
I..LOVE..YOU..
We Could Be In Love by Lea Salonga

Syrian wives and mothers left behind condemn men w...
SAGO AT GULAMAN RECIPE / SAGO MANGO CHINESE RECIPE...
I..LOVE..YOU..
We Could Be In Love by Lea Salonga