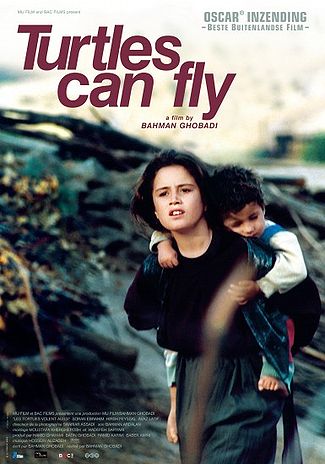 Near the Iraqi-Turkish border on the eve of an American invasion, refugee children like 13-year-old Kak (Ebrahim), gauge and await their fate.

Turtles Can Fly – Wake Up Call For Humanity 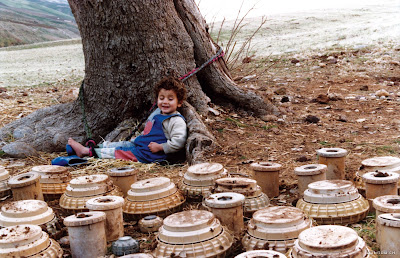 We all know life is hard. But there are movies that makes us escape the reality. We are so particular about the cast. We want to know if it is a hit. We sometimes wait  for recommendations. But ‘Turtles Can Fly’, is a movie which haunts us with the reality.
Many of us take our lives for granted. We wake up in the mornings stretching a little and there is a  smile in our faces as the dawn breaks. We desire for materials, like smart phones, Bikes, cars and various other gadgets. Sometimes we are disappointed by situations, when they don’t go our way. Whenever you feel sad about some petty things, watch a movie like ‘Turtles Can Fly.’ It could make us feel, how much blessed we are with our precious lives.

The teen, Soran (Soran Embrahim), is nicknamed Satellite because he’s the go-to guy for anyone in his village who wants a satellite dish installed. Long before anyone else, the budding entrepreneur recognized that dishes would be the only way to pick up news of an impending invasion. Led by Soran, the boys also attempt to rid the countryside of land mines, leftovers from the Iraqi military’s attempts to take over their village on the border between Iran and Turkey.


Another youth, Henkov (Hirsh Feyssal), his arms blown off by a bomb, is thought to be clairvoyant, the locals’ traditional method of obtaining information. Henkov’s pronouncements have an eerie way of coming true. He’s traveling nomad-like with his beautiful sister Agrin (Avaz Latif) and a very young boy whose relationship to them doesn’t become clear until near the end. Soran falls for her. Latif plays Agrin with a faraway look explained in a flashback showing the horror her family has been put through.

This riveting and heart-breaking Iranian film is written and directed byBahman Ghobadi whose film A Time for Drunken Horses was also about the desperate measures taken by children to survive in a surrounding of death and destruction.  he conveys the misery of kurdish refugees without a trace of self-pity or excess. It’s difficult to think of a filmmaker working today who is as committed to mastering the art of pure despair. The performances given by the children cannot be called acting as all the child actors in this movie were actual refugees .

Satellite is a great character , a survivor possessed of charisma, wit and wisdom beyond his years.  By far the most unerasable character in “Turtles Can Fly,” though, is the mysterious Agrin, whom Latif plays with breathtaking fierceness and power. In Agrin, Ghobadi has created one of the most haunting, unsettling and uncompromising portraits of psychic damage in recent memory. All the child actors bring electrifying authenticity and presence to their roles.

The landmines the children collect from the fields to sell to the U.N. or to arms merchants can explode at any moment, and the best ones, says Satellite, are “made in America.” In war zones around the world, even for years after the end of combat operations, these weapons continue to take lives and limbs, ugly and dangerous imports from the supposedly free world.

The movie has raised many questions :  If a child goes missing in a developed country, an amber alert is issued on the internet and the television – Is it ok for a child to die in a war simply because he/she was born in Afghanistan or Iraq or Kashmir or Africa? What gives people the right to put fellow human beings through such misery? Can people who inflict such implicit cruelty to so many people in general be fit to be called humans?

If history has thought us one thing – it is that – War is almost never an answer to anything. The Iraq war to us, unfolded through news clips of President Bush and Saddam Hussein. But that’s all in the background. In the foreground are the often forgotten casualties of war. They’ll be harder to forget after seeing “Turtles Can Fly.”I recommend this movie, because it isn’t just a movie, it’s a emotional experience for any human being.

In the Innocence of a Child (With 20 Pictures of L...
ENTERTAINMENT: Celine Dion’s Life and Love S...
Treatment: OKRA (LADY’S FINGER) JUICE CAN CU...
PEOPLE:The Now And Then Most Beautiful, Most Gorge...

In the Innocence of a Child (With 20 Pictures of L...
ENTERTAINMENT: Celine Dion’s Life and Love S...
Treatment: OKRA (LADY’S FINGER) JUICE CAN CU...
PEOPLE:The Now And Then Most Beautiful, Most Gorge...