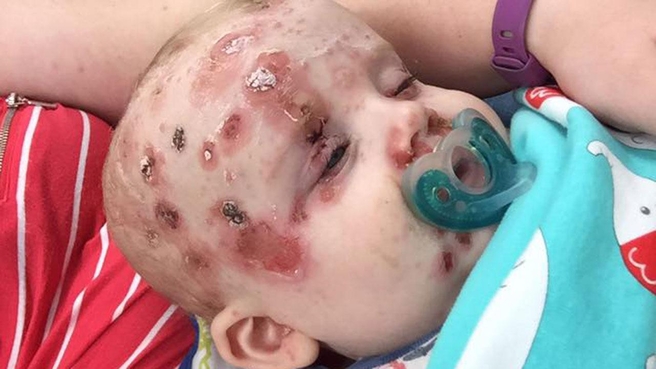 An enraged mother has taken to social media posting horrific and confronting images of her son laying in a hospital bed covered with scabs and blisters caused by chickenpox.

The Queensland mother, Kayley Burke, has shared a series of graphic images of her 11-month-old, Elijah, and has issued a stern warning to all parents about the dangers of not vaccinating their children.

Sadly baby Elijah was too young to receive the vaccination against the disease, as children aren’t able to be immunised until 18-months of age.

“Vaccinate your kids people,” the passionate post from Burke began.

“The pictures below show you exactly why.

For the past week baby Elijah has been crying in pain and scratching the sores that now cover his entire face.

The child was forced to be admitted to Ipswich Hospital after a secondary infection developed.

“Our poor baby boy who is too young to be immunised has caught the chickenpox.

“It has almost been a week since they showed up.

“Think about the risk you are putting on other helpless kids that are too young or who actually can’t be vaccinated!”

Late last year another mother from Queensland, anti-vaxxer and mother-of-two Hollie Singleton advertised via a Facebook anti-vaccination group the opportunity to infect other children with the highly contagious disease.

“My son has a full case of chickenpox. We are all home together for the week,” she wrote in December.

“If anyone wants to clear this bug now and get it over with please come to Brisbane and visit us. We are here to infect only those who want it!”

‘Chickenpox parties’ were a more common occurrence last century before a vaccine was developed.

Chickenpox vaccines have been part of the childhood immunisation regime since late 2005.

Latest figures released from the Australian Childhood Immunisation Register show 90.9 per cent of 18-month-old children were vaccinated against chickenpox.

My Love From The Star

CHILD ABUSE: Five-year-old girl screams after being strung up by her wrists by her cruel Vietnamese foster mother to punish her for taking a carton of milk

Heroism: Animals Could Be A Hero too
MUSIC: Have I Told You Lately That I Love You by ...
10 Beautiful Fashion Photography
FASHION: Hijab For Wedding

Heroism: Animals Could Be A Hero too
MUSIC: Have I Told You Lately That I Love You by ...
10 Beautiful Fashion Photography
FASHION: Hijab For Wedding