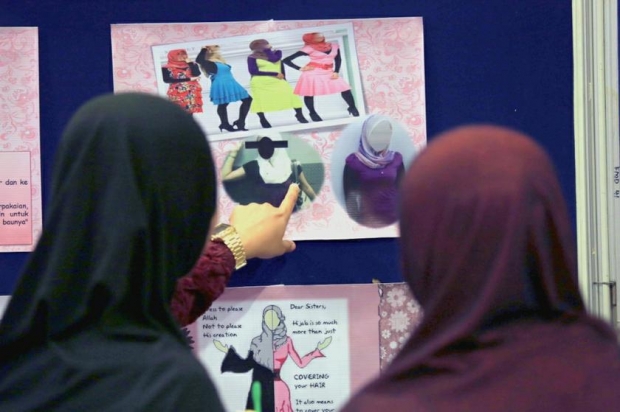 A Malaysian clothing company has created maternity pants which conceal a women’s ‘intimate parts’ (aurat) during childbirth. The garment is produced by the online store ‘MamaPride’ which claims a lot of women in their Muslim-majority country ‘do not agree’ with male doctors delivering their baby. (No, it’s the male husbands who ‘do not agree’ with this)

Muslim women looking at posters on Muslim fashion at the Islamic Women’s Convention (Konwanis) 2014 in Cyberjaya, on April 26, 2014. Now a doctor has come up with unique maternity pants for Muslim women. — File pic

The Malay Mail The invention of pants to cover a woman’s “aurat” during childbirth, was inspired by demands for pregnant Muslim women to only be handled by female doctors. The product, which ‘preserves the dignity of females’ by covering the thighs, ankles and knees during labour, is the first of its kind.

According to Dr Wan Yusof, one of the designers of the unique pants, the idea to develop the pants started five years ago, after the case of a Muslim woman who had her baby delivered by a male doctor. “The mother went into labour and was handled by a male doctor, which later kicked off a debate as to whether such practice was halal, Islamic and many others.

“A petition was even started by a Muslim doctor calling on the government to permit only female doctors and nurses to handle the pregnant mothers from all race and religion, with several Muslim scholars later declaring that male doctors should never attend to female patients.”

Dr Wan Yusof said that the argument then prompted research into possible solutions to the demands made in the petition, particularly ones that would not require the laborious policy changes to ensure patients are only attended to by doctors of the same sex.

According to Dr Wan Yusof, their research concluded that women’s thighs, knees and ankles need not be exposed during childbirth. “Our aim is to minimise the expose of unnecessary body parts of the mother, as the only part needed for medical purpose is the vagina and this is why we just want to cover the unnecessary part, but allow only the opening of the vagina,” he said.

The group then began looking for products that would allow these parts of the body to be clothed while still enabling doctors the needed access during delivery.

“There were a few, in fact, with one from the United States, but it was not acknowledged as maternity pants specifically, but a general hospital wear.

“There was also one from China, but all these were not fully optimised for labour purposes as there were issues with the measurement near the mother’s genitalia to allow the baby to be delivered,” he explained.

Dr Wan Yusof said that after studying the available options and failing to find one that met their criteria, the team of 19 doctors then designed the MamaPride prototype: Maternity pants that resemble track bottoms with an opening designed for childbirth.

They then proceeded to conduct trial runs of the pants at two private hospitals in Kelantan and Kedah to test for shortcomings, and after several minor upgrades based on feedback from pregnant mothers, packaged the pants for sale via Koperasi Amal Medik Bhd.

Dr Wan Yusof said that the cost to develop the product was about RM10,000, and was mainly borne by the designers who were determined to find a solution for Muslim mothers. The medical authorities were also not receptive to the idea, he said, when they declined to provide a development grant to the group last August, deeming the product to be impractical.

“Many rejected the idea of our product, claiming it is not viable. Nobody believed this idea to be an alternative solution, but we kept our hope and wanted to see it materialise…so we sacrificed for it,” he said.

“Today, our hope and perseverance has paid off.”

Dr Wan Yusof has taken a hiatus from his medical practice to focus on developing the market for MamaPride maternity pants.

MamaPride sells the trousers on its Facebook page and website for around £20 each. They are available in three sizes – large, extra-large and extra-extra-large. The trousers resemble baggy tracksuit bottoms and open only at the crotch to enable delivery of the baby.

According to the doctor, response to the product has been a mixed, both from Muslims and non-Muslims.

However, he said that the negative comments have not served to demoralise the team or efforts to market the pants.

“We have faced so much criticism, but we take it positively… when people say this product is not viable, we believe otherwise,” he added.

Rainbow Village or Caihongjuan Village, Taiwan (18...
Layering Moisturizers? Why You May Need More Than ...
Treatment:Cancer pill fights disease and gives lif...
10 RARE PHOTOGRAPHS AND THE STORY BEHIND THEM

ENTERTAINMENT: Shirley Temple (Black) Would Always Be America’s Darling Of The Depression Years And An All-time Child Star Icon