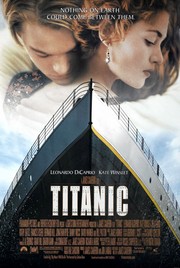 “My Heart Will Go On” by  Celine Dion

Every night in my dreams
I see you, I feel you,
That is how I know you go on

Near, far, wherever you are
I believe that the heart does go on
Once more you open the door
And you’re here in my heart
And my heart will go on and on

Near, far, wherever you are
I believe that the heart does go on
Once more you open the door
And you’re here in my heart
And my heart will go on and on 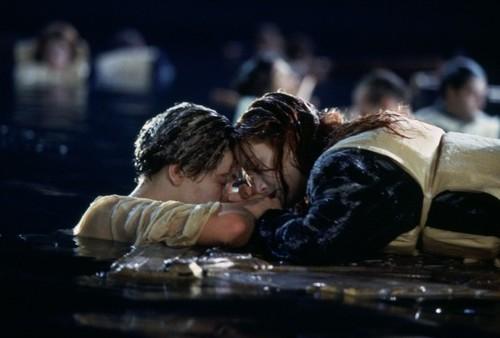 This spectacular epic re-creates the ill-fated maiden voyage of the White Star Line’s $7.5 million R.M.S Titanic and the tragic sea disaster of April 15, 1912. Running over three hours and made with the combined contributions of two major studios (20th Century-Fox, Paramount) at a cost of more than $200 million, Titanic ranked as the most expensive film in Hollywood history at the time of its release, and became the most successful. Writer-director James Cameron employed state-of-the-art digital special effects for this production, realized on a monumental scale and spanning eight decades. Inspired by the 1985 discovery of the Titanic in the North Atlantic, the contemporary storyline involves American treasure-seeker Brock Lovett (Bill Paxton) retrieving artifacts from the submerged ship. Lovett looks for diamonds but finds a drawing of a young woman, nude except for a necklace. When 102-year-old Rose (Gloria Stuart) reveals she’s the person in the portrait, she is summoned to the wreckage site to tell her story of the 56-carat diamond necklace and her experiences of 84 years earlier. The scene then shifts to 1912 Southampton where passengers boarding the Titanic include penniless Jack Dawson (Leonardo DiCaprio) and society girl Rose DeWitt Bukater (Kate Winslet), returning to Philadelphia with her wealthy fiance Cal Hockley (Billy Zane). After the April 10th launch, Rose develops a passionate interest in Jack, and Cal’s reaction is vengeful. At midpoint in the film, the Titanic slides against the iceberg and water rushes into the front compartments. Even engulfed, Cal continues to pursue Jack and Rose as the massive liner begins its descent. Cameron launched the project after seeing Robert Ballard’s 1987 National Geographic documentary on the wreckage. Blueprints of the real Titanic were followed during construction at Fox’s custom-built Rosarito, Mexico studio, where a hydraulics system moved an immense model in a 17-million-gallon water tank. During three weeks aboard the Russian ship Academik Keldysh, underwater sequences were filmed with a 35mm camera in a titanium case mounted on the Russian submersible Mir 1. When the submersible neared the wreck, a video camera inside a remote-operated vehicle was sent into the Titanic’s 400-foot bow, bringing back footage of staterooms, furniture and chandeliers. On November 1, 1997, the film had its world premiere at the 10th Tokyo International Film Festival. ~ Bhob Stewart, Rovi

Calvin Harris & Disciples – How Deep Is...
NATION: Kingdom Of Saudi Arabia Rulers And Their H...
How Could An Angel Break My Heart
Health: Health Benefits Of Wheatgrass, Facts and M...

Media influences do play a part in shaping teenage...
HEALTH EDUCATION: Heart attack symptoms – ho...
ISRAEL, JERUSALEM: CASE OF VIRGINAL CONCEPTION BAF...
HEALTH: Magnesium And Why It Is Important To Your ...

Media influences do play a part in shaping teenage...
HEALTH EDUCATION: Heart attack symptoms – ho...
ISRAEL, JERUSALEM: CASE OF VIRGINAL CONCEPTION BAF...
HEALTH: Magnesium And Why It Is Important To Your ...