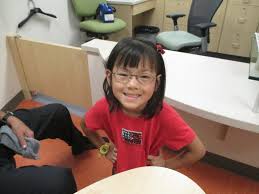 Scientists say an epidemic of myopia, or nearsightedness, is sweeping through Asian children, and is likely due to students’ spending too much time indoors studying and not enough time outside in the sunlight.

It has long been thought that nearsightedness is mostly a hereditary problem, but researchers led by Ian Morgan of Australian National University say the data suggest that environment has a lot more to do with it.

Myopia, which causes people to see clearly things that are near but not those that are at a distance, is the result of elongation of the eyeball, which leads to misalignment of light on the retina. Instead of landing on the retina at the back of the eye, incoming light converges at a point in front of the retina, leading to blurry images at a distance. Animal studies show that during early development, if the eye is not allowed to regulate its size to the proper length, then myopia can occur.

The scientists think that the neurotransmitter dopamine may play a significant role in the structural development of the eyeball. Exposure to light increases the levels of dopamine in the eye, which may prevent elongation of the eyeball.

The incidence of myopia is high across East Asia, afflicting 80-90% of urban 18-year-olds in Singapore, South Korea and Taiwan. The problem is social rather than genetic. A 2012 study of 15,000 children in the Beijing area found that poor sight was significantly associated with more time spent studying, reading or using electronic devices—along with less time spent outdoors. These habits were more frequently found in higher-income families, says Guo Yin of Beijing Tongren Hospital, that is, those more likely to make their children study intensively. Across East Asia worsening eyesight has taken place alongside a rise in incomes and educational standards.

The biggest factor in short-sightedness is a lack of time spent outdoors. Exposure to daylight helps the retina to release a chemical that slows down an increase in the eye’s axial length, which is what most often causes myopia. A combination of not being outdoors and doing lots of work focusing up close (like writing characters or reading) worsens the problem. But if a child has enough time in the open, they can study all they like and their eyesight should not suffer, says Ian Morgan of Australian National University.

Yet China and many other East Asian countries do not prize time outdoors. At the age of six, children in China and Australia have similar rates of myopia. Once they start school, Chinese children spend about an hour a day outside, compared with three or four hours for Australian ones. Schoolchildren in China are often made to take a nap after lunch rather than play outside; they then go home to do far more homework than anywhere outside East Asia. The older children in China are, the more they stay indoors—and not because of the country’s notorious pollution.

Dr. He Mingguang, a Chinese ophthalmologist and leading myopia researcher, has another hypothesis.

“It’s the schooling system,” he says. Studies suggest China’s crushing homework load is putting too much strain on kids’ eyes, he says. A typical 10-year-old here eats supper on weeknights and then studies from 7 p.m. until 11:30 p.m. or midnight.

He, who’s now a research professor at the University of Melbourne, says changing habits in China is hard because the society is so competitive. School kids are forced to spend countless hours studying for the country’s do-or-die college entrance exam, the dreaded “gaokao.”

“A lot of Chinese parents, they think, if [their children] fail the university gaokao — or entry exam — they won’t have a good career,” He says.

Another study published in 2008, which focused on young, ethnic Chinese students in Singapore and Sydney, suggests more time outdoors in the sun might help.

Students surveyed in both countries spent similar amounts of time studying. But 29 percent of the Singaporean students had myopia compared with just 3 percent in Sydney.

“The big difference was the Chinese children in Australia were outdoors a lot more than their matched peers in Singapore,” says Ian Morgan, a retired biologist at Australian National University, who coauthored the 2008 study. “This was the only thing that fit with the huge difference in prevalence.”

Morgan thinks sunlight may stimulate the release of dopamine from the retina and inhibit the elongation of the eye that results in myopia.

Many Chinese children with myopia don’t wear glasses and just struggle with being nearsighted. It’s not because of the cost; a decent pair of glasses  costs just $5. It’s because some Chinese distrust spectacles.

“Parents, teachers and even some rural doctors think wearing glasses will harm kids’ eyes,” says Dr. Nathan Congdon, an ophthalmologist at Zhongshan Ophthalmic Center at Sun Yat-sen University in the southern city of Guangzhou, who led the new study. “In rural China, only about one-sixth of the kids who need glasses actually have them.”

Congdon has worked on studies in China that show glasses don’t weaken vision and actually improve academic performance. He hopes to use those data to change minds and persuade the government to provide more glasses to kids. That way, at least, they’ll be able to read a blackboard.

Can the progression to myopia be prevented, or at least stopped? So far, no effective prevention methods or therapies for nearsightedness exist, other than corrective lenses like glasses or contacts. The drug atropine slows down eye growth, but the drops can cause side effects, and they lose their effectiveness over time, says Morgan. “We need more evidence on just about everything that’s been tried,” he says.

When Stanford University’s Rural Education Action Programme  gave thousands of students free glasses, it found being able to see clearly had a higher impact on educational attainment than improving nutrition or the quality of teaching, says the programme’s co-director, Scott Rozelle. Another study reported that giving students free glasses improved test scores by the equivalent of nearly a year’s extra education. Daylight and free glasses are both cheap remedies for a growing national problem. All that is required now is a bit of vision.