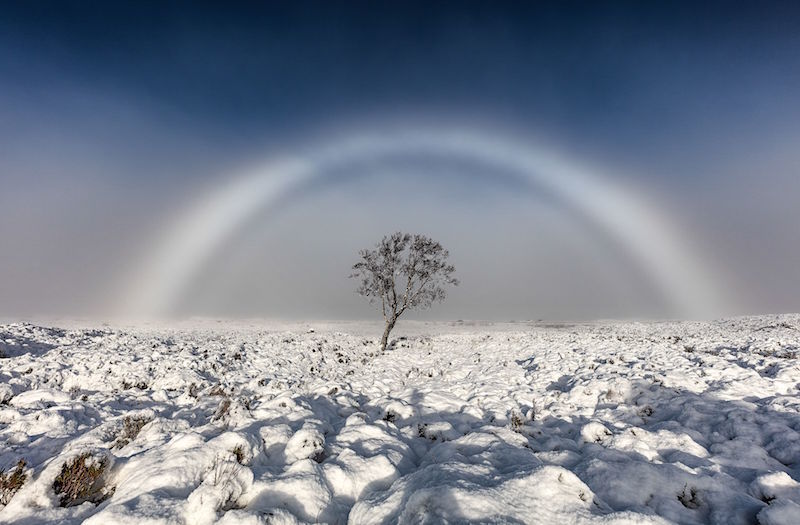 This photograph is such a beauty, and really defines the enchanting magic winter exudes.

Sometimes all the elements just come together at once to make the perfect photo.

Winter is pretty much a fairytale, a photographer named Melvin Nicholson captured a stunning white rainbow.

During a shoot in Glencoe, Scotland on Sunday, Nov. 20, 2016, photographer Melvin Nicholson had just that opportunity when a fogbow (also known as a white rainbow) appeared in the sky.

Nicholson posted this photo to Facebook, starting off his caption saying,

“I ventured down to Rannoch Moor today with fellow talented Scottish landscape photographer Scott Robertson in preparation for my four day workshop that starts this Thursday when I saw this unbelievably beautiful white rainbow also known as a fog bow. BIG THANKS to Scott Robertson Landscape Photography too for showing me this tree otherwise I would not have captured this shot.”

This rare white rainbow was perfectly arched over a lone tree. The ends of the rainbow look like they melt into the snow.

“I was shooting with a friend of mine Scott Robertson when he mentioned that a fogbow was appearing due to the sun burning off the mist,” Nicholson told Mashable. “I moved into position and photographed the tree centrally positioned under the fog bow. Scott also captured a similar image.”

The fogbow was captured on Rannoch Moor, which isn’t far from Glencoe.

“It is a spectacular place flanked by mountains on either side and is elevated in height, hence why it attracts the snow and cold weather,” Nicholson explained.

Nicholson said that he hadn’t previously known that fogbows — which are formed when the sun reflects from the tiny droplets of water in fog or mist, according to the Met Office — existed.

“I am just so pleased that people are getting to know that fogbows exist as it appears few people do, including me before Sunday,” he said.

The picture quickly gained attention and spread across social media after Nicholson shared.

“The photograph has received tremendous reaction worldwide and has featured in several of the national press overnight,” he said. “National Geographic have been in contact as have several news channels across the world.

The photographer continued to explain,

“It is a colourless rainbow that is made up of tiny water droplets that cause fog. It’s an amazing thing to witness and can generally only be seen if the sun is behind you when you are looking at it.”

“As soon as I saw this wonderful isolated windswept tree, I knew that it had to be framed by the fog bow. Freshly fallen snow set the scene all around. It was just beyond magical and one of those days that you’ll remember for a long time to come.”

A fog bow is a similar phenomenon to a rainbow; however, as its name suggests, it appears as a bow in fog rather than rain.

Because of the very small size of water droplets that cause fog – smaller than 0.05mm – the fog bow has only very weak colors, with a red outer edge and bluish inner edge.

This photograph is such a beauty, and really defines the enchanting magic winter exudes. Rare phenomena: The fog bow was spotted by Sam Dobson during a recent expedition to the North Pole

Navid Baraty is self-taught photographer based in Brooklyn, New York.

Treatment: Dry Shampoo and its Usage
In The Beginning Lyrics
10 Photos Heat wave: It kills more than 1,100 in I...
TERRIFYING: Evil Mum Amanda Hawkins ‘Intenti...

Treatment: Dry Shampoo and its Usage
In The Beginning Lyrics
10 Photos Heat wave: It kills more than 1,100 in I...
TERRIFYING: Evil Mum Amanda Hawkins ‘Intenti...