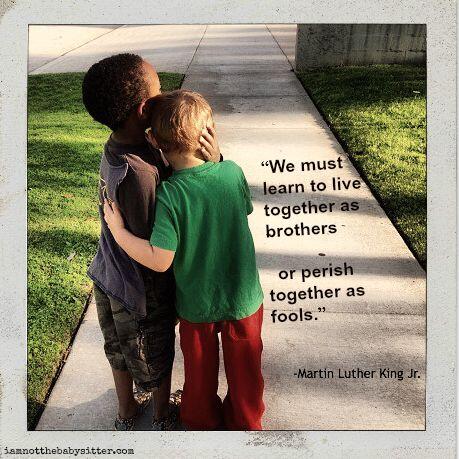 Wikipedia: Racism is the belief that all members of each race possess characteristics, abilities, or qualities specific to that race, especially so as to distinguish it as inferior or superior to another race or races.

Racism is not only a violation of human rights, but it has serious health consequences.

AU.NEWS.YAHOO: Racially Motivated Crime Of US College Towards Her Black Roommate

A US college student arrested after boasting of ‘spreading bodily fluids over roommate’s backpack, with police saying it was a racially motivated crime.

University President Greg Woodward said Brochu is no longer a student at the school and will not be returning. University officials said federal privacy laws prevent them from saying whether a student is expelled.

“The accused student’s behavior was reprehensible and does not reflect the values of our institution,” Woodward said in a statement to the campus community Tuesday, October 21,2017.

“The incident has brought about accusations of racism, and I want you to know that I hear and share your anger and frustration. Acts of racism, bias, bullying, or other abusive behaviors will not be tolerated on this campus.”

Brochu, of Harwinton, Connecticut, did not return a message on Wednesday,November 1,2017. She did not comment during a Wednesday court appearance, when a judge barred her from campus property and ordered her to stay away from her now-former roommate.

Brochu reportedly told police she put her body fluids on her roommate’s backpack and licked her roommate’s plate, fork and spoon because she was frustrated with her rude behavior.

The teenager denied other actions she wrote about on Instagram, including that she put her roommate’s toothbrush “where the sun doesn’t shine.”

Brochu allegedly wrote in an Instagram post: “Finally did it yo girl got rid of her roommate!! After 1½ month of spitting in her coconut oil, putting moldy clam dip in her lotions… putting her toothbrush places where the sun doesn’t shine, and so much more I can finally say goodbye Jamaican Barbie.”

The roommate, Chennel Rowe, said in a Facebook video that she had a tense relationship with Brochu and moved to another room about two weeks ago.

Rowe, from New York City, said other students told her about Brochu’s social media postings, and she realised the contamination of her personal items may have caused the extreme throat pain she was suffering.

She also told WTIC-TV that university officials were at first slow to respond and threatened to remove her from campus if she talked about what happened.

Woodward said the university took immediate action once the allegations were brought to officials’ attention on October 17. Adam Goodes was called an “ape” by a teenage girl during the Swans’ clash against the Magpies Source: THE AGE

We have seen the very real impact of racism recently with the experience of Aboriginal footballer Adam Goodes.

In 2013, Goodes suffered backlash in media coverage and from the public for speaking out against being called “an ape” by a young spectator. More recently, Goodes was criticised after celebrating his culture by doing a war-cry after kicking a goal during the AFL Indigenous Round. After he spoke out about this event, and teammate Lewis Jetta also did the war-cry in support, football crowds steadily increased their booing of Goodes.

Goodes was shamed for exercising his rights to be free from racial hatred and to practice and promote understanding of his culture. These rights are protected under international law, and people are protected from racial hatred in Australian law under section 18C of the Racial Discrimination Act 1975. No one should be targeted, publicly shamed or intimidated for speaking out against racism or for expressing their cultural identity.

Goodes has been the target of continued public racial vilification. Any Indigenous person can tell you why the “ape” comment is offensive: our mob used to be officially classified as “flora and fauna”, considered “less evolved” and not counted in the census, a history reflected in continuing prejudice about Indigenous people being “primitive”. The outrage against the war-cry was clearly racially motivated; a reaction to Goodes’ public expression of cultural identity and pride.

These are only the two instances of many racism happened in many places.

The booing eventually reached a level where it had a humiliating and intimidating impact Goodes, leading to him taking time away from the game.

There are serious consequences for those experiencing racism, including poor physical and mental health. Indigenous people who experience discrimination are more likely to be in poor health, and engage in substance abuse, which is also a risk factor for Indigenous involvement in the justice system.

Over half the number of Indigenous people who experience discrimination also experience psychological distress, which increases the more a person is exposed to racism. These high levels of stress lead to obesity,chronic,disease, and, sadly, suicide.

RACISM.IT STOPS WITH ME: Racism can happen just about anywhere. Research indicates that the places where racism is experienced most frequently include in the neighbourhood, shops, and in the workplace. It can emerge in other spaces such as on public transport, sporting events or at schools.

Expressions of racism can also be found in media. This happens when, for example, racial groups are represented in an unfair or negative light in news reports or commentary. Many regard the lack of cultural diversity represented in media as another form of racism.

In recent years, racism has become a particular problem online. Whether it is offensive comments on social media, inflammatory memes or hateful videos shared online, cyber-racism has had a significant impact on the growth of racist attitudes. Those spreading racist messages can often do so with the benefit of anonymity.

Like abuse and bullying acts, there are effects and consequences and no one wins. Here are a few:

Physical and emotional impacts:
Exclusion or rejection directed to you by others for reasons that you often have no control of can cause extreme worry to an individual. It results in anxiety, sadness, depression and a feeling of guilt and emptiness. These often translate into depression, loss of interest, eating disorders and stress-related ailments.

They may take to alcohol or drugs, or may form their own opinions on others, develop a hatred for others, or withdraw from people.

It can affect them financially, may lose their job, quit school or do poorly at school.

Society and Businesses
Communities and businesses that fail to take strong action on discrimination tend to be lower in productivity. This is because people feel disgruntled, and loose interest in working hard. There is a drop in morale, trust and confidence on the part of the employees. People with talents and exceptional skills and abilities are not attracted to these places because they do not want to be discriminated against.

Politics
People who face racial discrimination may regroup with some vengeance in mind against other groups. This can fuel conflicts and social discords. In fact, many conflicts and wars have been started in this way.

The Culprit
There are very strict laws on discrimination that may be applied to individuals who discriminate. There is no excuse, even if you did not know that your actions were discriminatory. Employees and individuals can bring legal action on the business or individual who did the act, and there are consequences for guilty parties.

On the other hand, there are some cases that racism doesn’t stop in the name of love. And this is true to the love story of Howard and Myra. Let’s read their love story.

An interracial high school couple broke up because of social pressure during the late 60s. Now, having finally reunited with his sweetheart after 43 years apart, this man knew for sure he wasn’t going to walk away again.

On that day when Howard Foster of Columbus, Ohio, saw his once high school sweetheart, Myra Clark, again at Sharon Woods park, he knew he wasn’t going to make the mistake of letting her go again.

“It was that dream you just never thought would come true … there she was,” Howard told the Associated Press.

More than four decades had passed since Howard broke up with Myra for an unfortunate reason: racism. He parted ways with the love of his life, because he is a black and Myra is a white, and society couldn’t accept that.

Howard and Myra had dated in the late 60s, when they were both classmates at Columbus West High School. They would often chat on the phone for hours ’till the wee morning hours. Yet, rarely is love smooth and easy sailing; the couple had to contend with the high racial tension of those years.

Howard thought he could put up with the pressure of prejudice, but he was wrong. After graduating from high school, he often faced discrimination from professors at Columbus Technical Institute simply because of his skin color.

No matter how well he did in an assignment, his professors would give him a “D.”

This made Howard think twice about his relationship with Myra.

“Society wasn’t going to let us be together and she be happy … She’d get tired of the stares; I just thought it was unfair to her,” Howard said. “Her happiness was the most important thing.”

He didn’t want Myra to face the same prejudice, so he made the painful decision to break up with her.

The two bade farewell, turning back to look at each other for the last time.

It was then that Myra had a hunch that they would see each other again. And she was right.

After that joyful reunion in 2013, which was made possible thanks to a mutual friend, the couple, now in their 60s, were never to be separated again.

The couple hold hands fondly every night before sleep, perhaps trying to make up for lost time.

Hopefully someday, more people will come to realize that discriminating based on race or skin color is wrong.

As Nobel Prize-winning writer, Elie Wiesel wrote: “No human race is superior; no religious faith is inferior. All collective judgments are wrong. Only racists make them.” 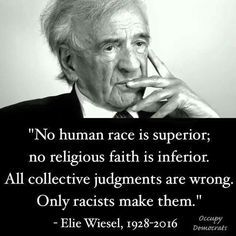 THE GOOD READS: Eliezer Wiesel was a Romania-born American novelist, political activist, and Holocaust survivor of Hungarian Jewish descent. He was the author of over 40 books, the best known of which is Night, a memoir that describes his experiences during the Holocaust and his imprisonment in several concentration camps.

Wiesel was awarded the Nobel Peace Prize in 1986. The Norwegian Nobel Committee called him a “messenger to mankind,” noting that through his struggle to come to terms with “his own personal experience of total humiliation and of the utter contempt for humanity shown in Hitler’s death camps,” as well as his “practical work in the cause of peace,” Wiesel has delivered a powerful message “of peace, atonement and human dignity” to humanity.

On November 30, 2006 Wiesel received an honorary knighthood in London, England in recognition of his work toward raising Holocaust education in the United Kingdom.