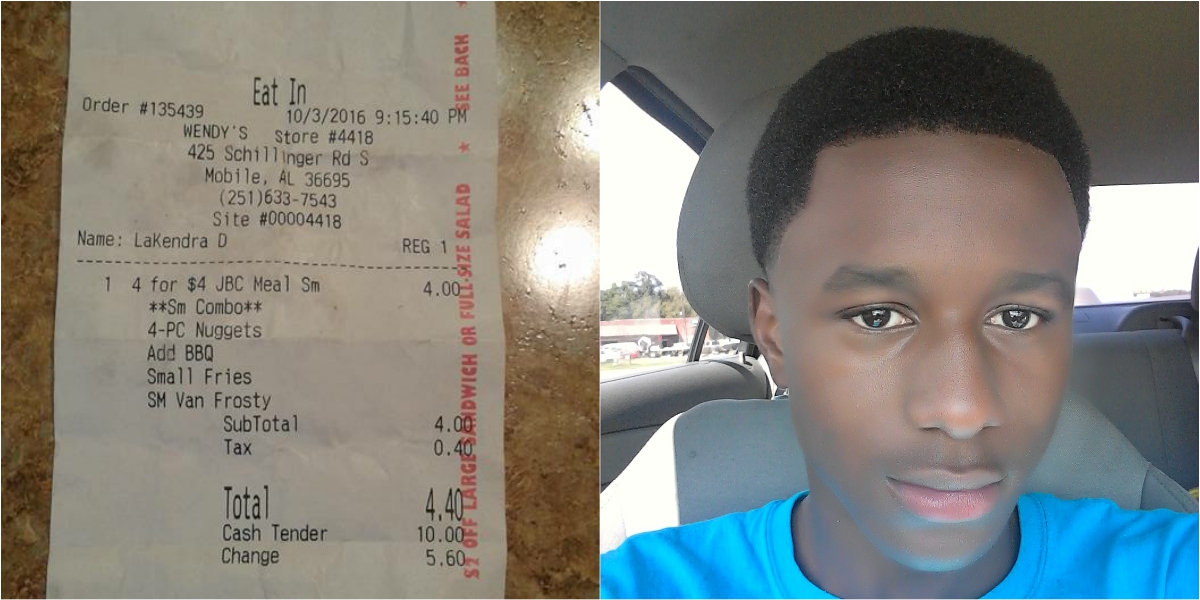 Quenterus Brown, 15, ordered his chicken nuggets at the Alabama Wendy’s on Monday (local time), but was left running into his mother’s arms after the cashier left the crude nickname instead of asking for his actual name, as is procedure.

“It hurt my feelings, it made me cry I was embarrassed and I felt bad,” Brown told wkrg. 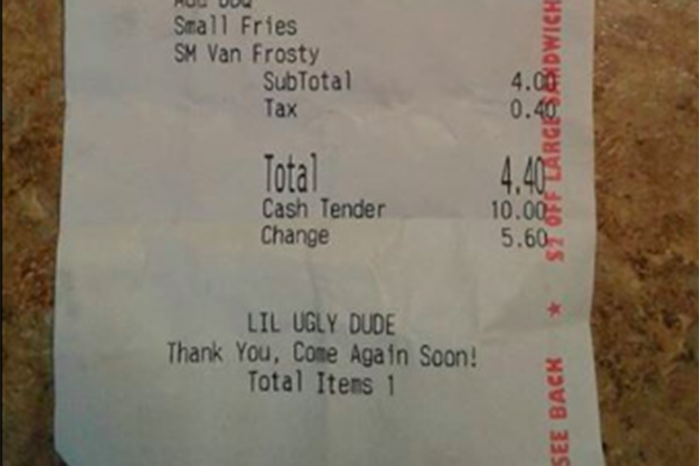 It’s unknown what the fate of the Wendy’s cashier was. Photo: Facebook

His furious mother, Teneshia Bush took to Facebook with a copy of the receipt, slamming the fast food giant.

“My child was so embarrassed and upset he said the whole store was laughing at him including the manager,” she said.

“He went inside to place his order, instead of the cashier being courtesy (sic) and ask my son what’s his name to put on his ticket she took it upon herself to put on the bottom of his receipt Lil Ugly Dude.”

“My ghetto side was telling me to go back up there and let them have it. But I rather do it the right way.

After Ms Bush’s post received more than 2,000 shares, Wendy’s director of management Ed Sheffield was forced to issue a statement.

“Wendy’s has been a part of this community for many years, and we were certainly disappointed to learn that one of our employees treated a guest in such a rude manner,” he stated.

‘We take this seriously, and we no longer employ this individual. When we learned of the incident, we immediately contacted the guest. We apologized to the young man and his mother and look forward to welcoming them back to Wendy’s again.’ (au.news.yahoo.com)

When an employee is purposely disrespecting the customers at a business, that employee is negatively affecting how the public views that company and their values. Hopefully, this former employee (and all the other employees involved) has learned a lesson and will think twice before they choose to bully someone again.

Racism may be direct or indirect, individual or institutional:

Direct racial discrimination happens when someone is treated less fairly than someone else in a similar situation, because of their race, colour, descent, or national or ethnic origin. For example, if a school will not hire a staff member just because of his or her race or ethnicity. Indirect racial discrimination can happen when a policy or rule treats everyone in the same way, but has an unfair effect on more people of a particular race, colour, descent, or national or ethnic origin than others. For example, a rule that says that students may not wear anything on their heads could result in discrimination against students whose religions require headwear.

Racist behaviour may include:

Exploring the Psychological Motives of Racism

Why are people still racist?

Many sectors of American culture seem to be very engaged in efforts to promote racial equality and the celebration of diversity. On the other hand, clearly racism has not completely disappeared. Though we often hear about deep-rooted institutional and cultural forces that contribute to racism, it seems like we less often hear about the psychological motives and processes involved. In other words, psychologically, what does being racist do for a person? Below I provide a list of psychological motives that appear to contribute to racism.

A number of published studies have demonstrated that people sometimes use prejudicial attitudes and discriminatory behavior to boost their own self-esteem. When people’s self-esteem is threatened, prejudicial actions such as racism appear to restore esteem (at least for some). This is obviously not a socially productive way to gain feelings of self-worth, but it appears to be one way that some people do it.

Humans are social creatures. We like being part of a group and just as we like to see ourselves in a positive light (self-esteem), we like to perceive our groups as important or significant (positive distinctiveness). The problem is that one way this is done is by looking down on members of other groups. So if someone is noticeably different in some way, people sometimes hold negative attitudes about that individual because they belong to a different group. Classic and contemporary research in social psychology supports this idea as people tend to respond more favorably to others if they share a common groupidentity. This identity can be religious, political, social, and even racial. As America becomes increasingly diverse and our attitudes about defining groups become more inclusive, racism should continue to decrease. However, at least for some individuals, it seems like race is still an important group distinction and this distinction promotes negative attitudes towards people who belong to other racial groups.

Some scholars have argued that prejudice and racism in particular may be driven, in part, by basic survival motives. Humans evolved as a species that thrives in groups, and groups compete over scarce resources. And we do not have to look back at our ancestors to see this in practice. Even today, nations and groups within nations fight over access to limited resources (e.g., water, good land, ports, oil, etc). Classic social psychological research demonstrates that it is very easy to pit groups against one another if they are competing for a scarce resource. Remember the television show Survivor? Therefore, one cause of racism may be an innate proclivity towards group conflict in the service of resource acquisition. Of course, this is extremely problematic and maladaptive in the modern interconnected and mobile world. However, when humans evolved, our world was much different. Our brains evolved for that world, not the modern world we live in today. Therefore, we must strive to have belief systems that reject what may be a natural inclination to not trust or hold negative attitudes about people who look different than us. We have made a lot of progress, but we still have a long road ahead of us if there is any truth to the assertion that prejudice may be rooted in basic survival motives.

People are motivated to perceive life as meaningful. How would racism help people gain meaning though? People find meaning by investing in cultural belief systems or worldviews that give their lives some sense of order and certainty. Sadly, some people invest in worldviews that promote racism, beliefs about racial superiority. The good news is that the number of people who subscribe to racist worldviews appears to be decreasing. However, for those who do have racist worldviews, when their sense of meaning is threatened or the world feels uncertain, they will turn to their worldviews for guidance and comfort.

10 Amazing Colors of the World
HEALTH EDUCATION: THE ONE AND ONLY EFFECTIVE WAY O...
Balochistan and Some Amazing Photos of Balochistan
What is Beauty Around the World: 21 Traditions and...