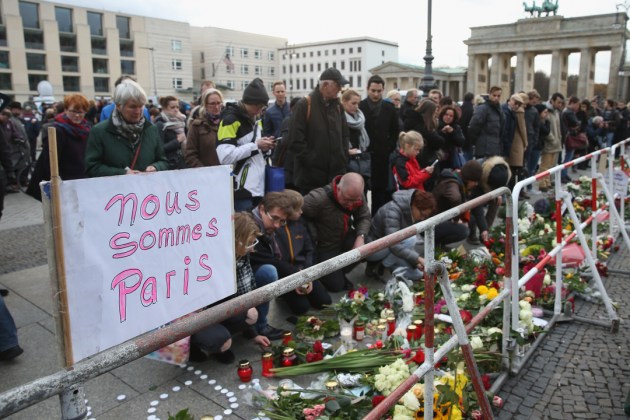 World leaders responded to deadly attacks in Paris with defiant pledges of solidarity and Europe tightened security after Islamic State said it was behind an assault by gunmen and bombers that left at least 129 dead and 352 injured after Kalashnikov shootings, grenade and suicide strikes in the French capital.

In the wake of the attack, there has been an outpouring of reaction across social media.

From Barack Obama to Vladimir Putin and across Europe and the Middle East, leaders expressed their condolences to French President Francois Hollande who said the attacks amounted to an act of war against France.

Terrorists blew themselves up with suicide belts as security forces stormed the concert hall. 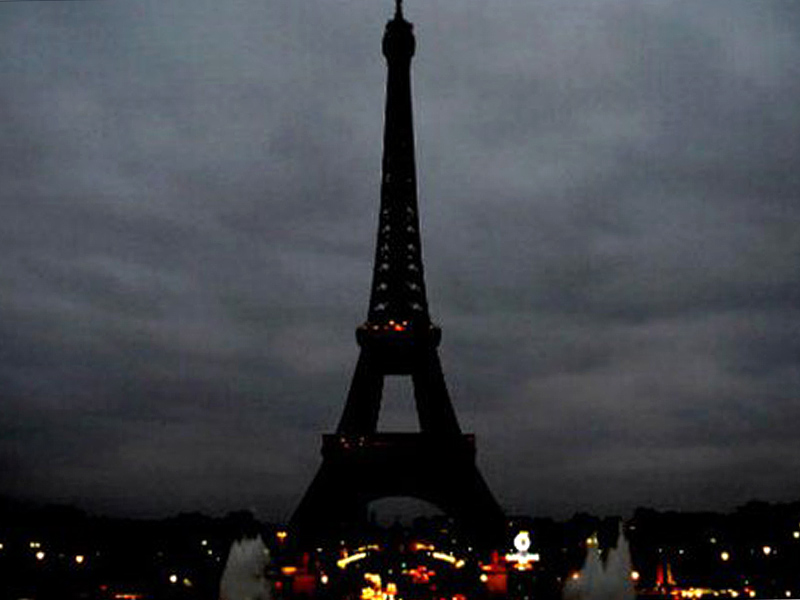 Gone dark: The Eiffel Tower has gone dark following the attack on the City of Light COURTESY HERALD DE PARIS

He also told all 12 million residents of the Île-de-France region, which includes Paris, to remain indoors.

“Terrorist attacks of an unprecedented magnitude are in play in Paris. It’s horror,” Hollande said. “We have mobilized all forces possible to neutralize the terrorist.”

Early Saturday, he declared: “For all those who’ve seen these atrocities, rest assured – we want to say that we will bring the fight against terrorism and will be without pity because when terrorists are capable of such atrocities, it will certainly be faced with a determined France, a united France.” (people.com) President Obama addressed the attacks in Paris on Friday evening, calling the attacks “heartbreaking.” “This is an attack not just on Paris… It’s an attack on all of humanity and the universal values we share,” he said. “France is our oldest ally,” he said. “The French people have stood shoulder to shoulder with the U.S. time and time again. We want to be very clear that we stand with them in the fight against terrorism and extremism.” “Once again we’ve seen an outrageous attempt to terrorize innocent civilians… Those who think that they can terrorize the people of France or the values that they stand for are wrong.” He added, “American people can draw strength from the French people’s commitment to life, liberty and the pursuit of happiness.” “We’re going to do whatever it takes to work with the French people and to work with nations around the world to bring these terrorists to justice and to go after any terrorist networks that go after our people.” “This is a heartbreaking situation and obviously those of us here in the United States know what it’s like. We’ve gone through these kinds of episodes ourselves. Whenever these kinds of attacks happened, we’ve always been able to count on the French people to stand with us.” (Variety.com)

“Last night’s bloody terrorist attack in Paris was a blind but targeted strike. It was a blow against Europe, home of Democracy and freedom, a blow against multiculturalism. At this hour we all stand together, we strengthen our solidarity towards the French people and support their government. We fight against the plans of terrorism and barbarism. The terrorists will prevail only if they achieve to terrorise us; only if they force us to abandon our principles; if they lead us to a fortress-Europe, where scared people live.” (telegraph.co.uk) 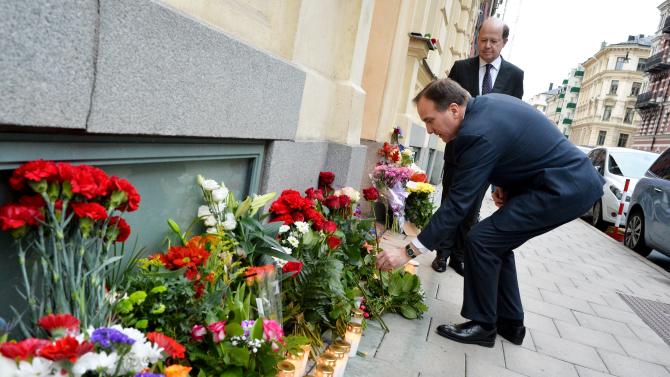 Sweden’s Prime Minister Stefan Lofven leaves a red rose outside France embassy in in commemoration of the victims of the Paris attacks, in Stockholm, Sweden November 14, 2015. (Reuters) Sweden’s Prime Minister Stefan Lofven says a Swedish citizen was killed in the Paris attacks, and there are unconfirmed reports of a Swede wounded by gunfire. Lofven said Saturday “We have been in contact with the next of kin. They should of course know that the whole of the Swedish people and my sympathy is with them, our hearts are with you.” Foreign Ministry spokeswoman Victoria Bell said a Swedish national may have gun wounds. She didn’t give further details about his condition. (news-sentinel.com)

Dr Shuja Shafi, the secretary general of the Muslim Council of Great Britain In a strongly-worded statement, the council’s secretary general, Dr Shuja Shafi, said there was nothing Islamic about the terrorists, and called for those responsible to be brought to justice. “The attacks once again in Paris are horrific and abhorrent, and we condemn this violence in the strongest possible terms,” he said. “My thoughts and prayers for the families of those killed and injured and for the people of France, our neighbours. This attack is being claimed by the group calling themselves ‘Islamic State’. There is nothing Islamic about such people and their actions are evil, and outside the boundaries set by our faith. (westerndailypress.co.uk)

A squad of police outside the French embassy in Berlin, where the European and French flags were flying at half mast on Saturday. (thelocal.de) A member of Bavaria’s regional government has called for better border controls in the wake of the Paris attacks. Bavaria’s Finance Minister Markus Soeder told weekly Welt am Sonntag that Germany needs to know who is entering the country. The newspaper quoted Soeder as saying that “the days of unchecked immigration and illegal entry can’t continue. Paris changes everything.” Bavaria has been the main point of entry for hundreds of thousands of migrants coming to Germany this year. Soeder was quoted as saying that if Germany’s federal government wasn’t able to secure the border “then Bavaria can take on this task.” Soeder is a member of the conservative sister party of Chancellor Angela Merkel’s Christian Democratic Union. (news.sentinel)

Bands like U2 and Foo Fighters had already taken the initiative to cancel upcoming Paris gigs in the wake of the attack at Le Bataclan during an Eagles of Death Metal concert that claimed at least 118 lives (the band has confirmed all members are safe). But this new announcement means all Paris concerts have been canceled until further notice by city officials. (billboard.com)

Bono and U2 place flowers on the pavement near the scene of yesterday’s Bataclan Theatre terrorist attack on Nov. 14, 2015 in Paris, France.

Mounted police patrol in Paris on Nov. 14, 2015, at the Eiffel Tower, which has been closed to the public following a series of coordinated attacks in and around Paris late Nov. 13, which left at least 128 people dead. Schools, markets, museums and major tourist sites in the Paris area were closed and sporting fixtures were canceled following the terror attacks on the French capital, local authorities said. LIONEL BONAVENTURE/AFP/Getty Images (billboard.com) 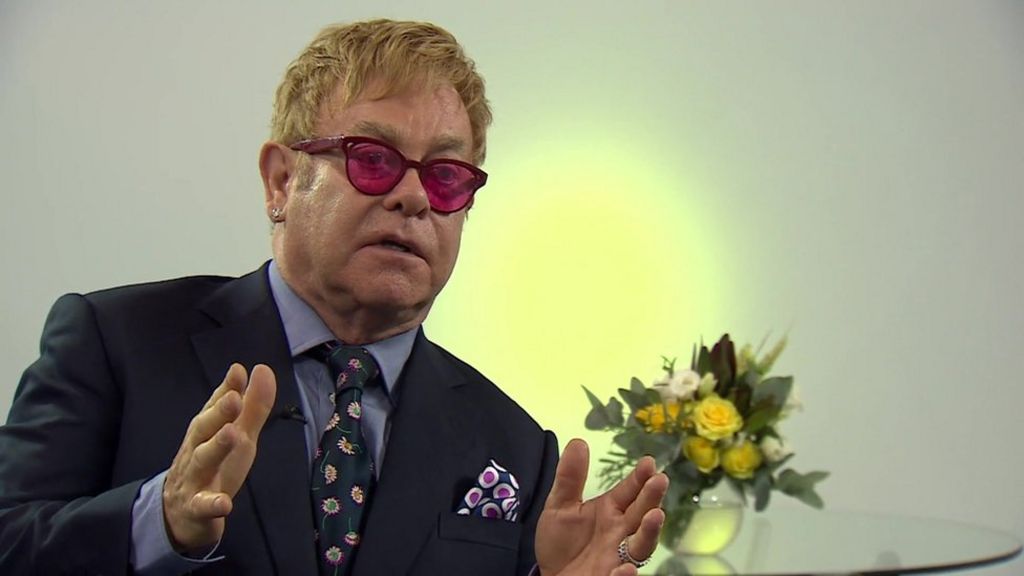 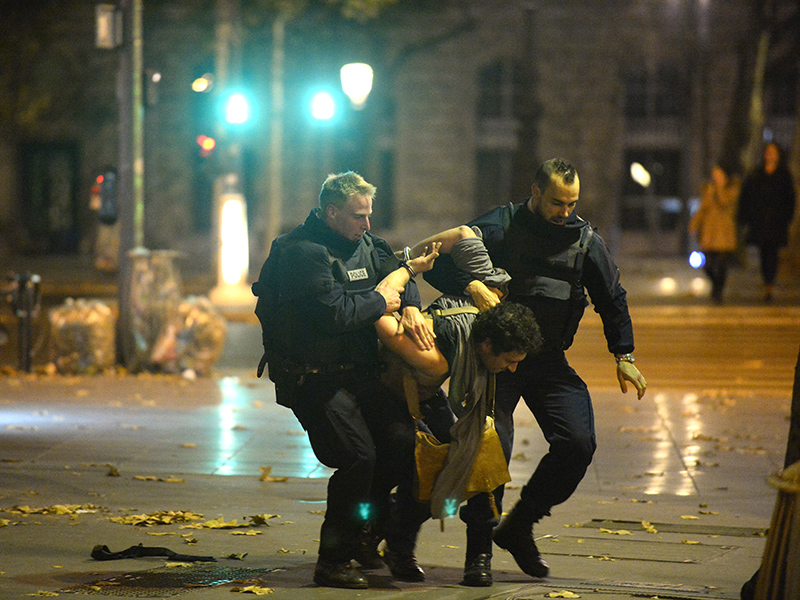 A suspect is carried away by Place Republique JOHN VAN HASSELT / CORBIS (people.com) 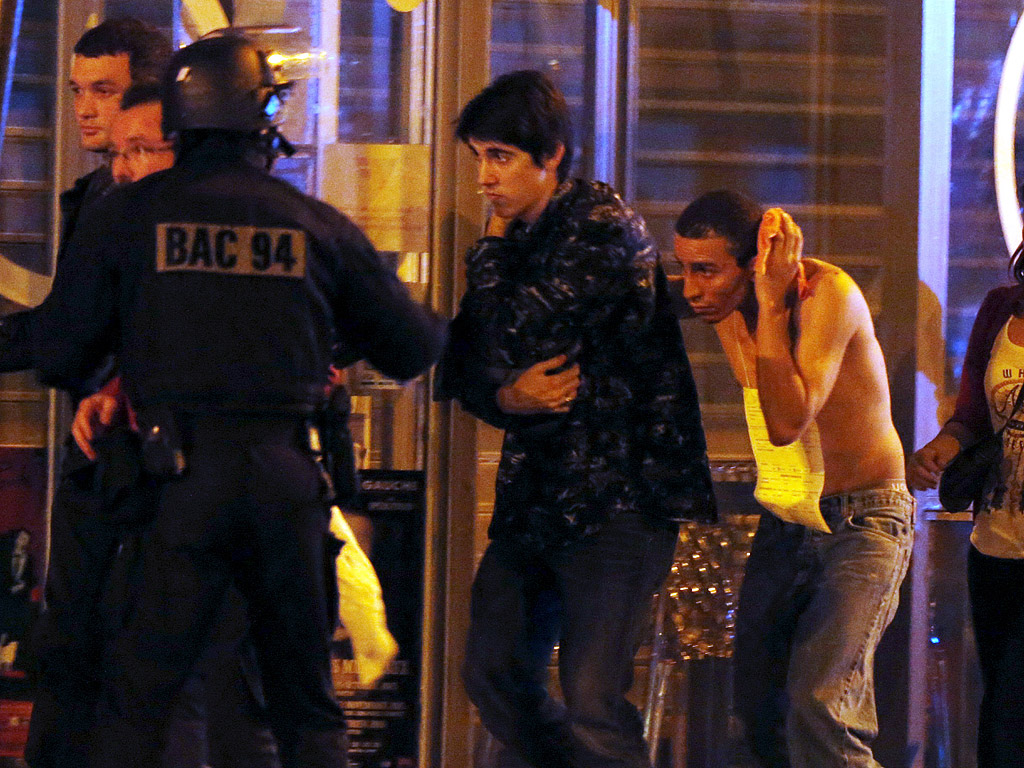 In addition to the attack at the concert hall, dozens more victims were gunned down at cafes and on the streets of Paris.

He also said five terrorists had been “neutralized.”

AFP reports that at least two suicide bombers tried to attack Stade de France, where 80,000 soccer fans were watching a friendly match between France and Germany. Three people were reported dead there. 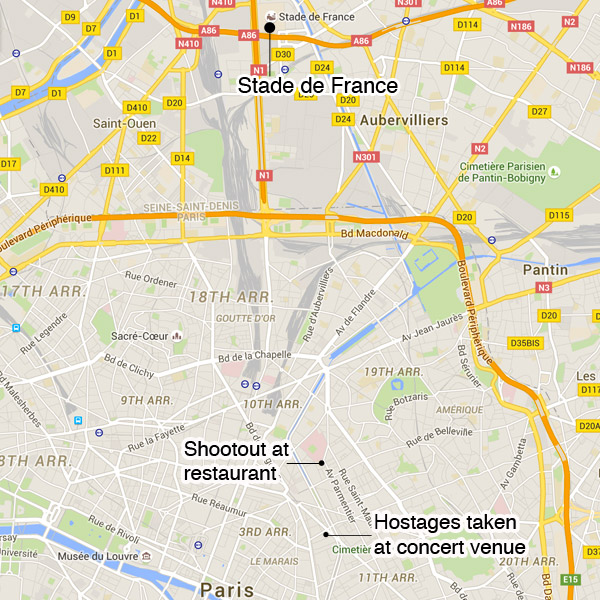 The explosions were heard inside the area, causing players on the pitch to stop play and tens of thousands to rush the field. President Francois Hollande was at the match at the time and was whisked away from the scene by security services.

In New York City, the World Trade Center lit up with the colors of the tricolore in solidarity. (people.com) Famous landmarks around the world were lit in the blue, white and red colors of the French flag to show solidarity with the French capital after at least 127 people were killed in multiple terrorist attacks there Friday night.

The 408-foot spire of One World Trade Center, built at the site of 9/11 terror attacks in New York City, was illuminated on Friday night.

“It is a very painful night. And our hearts and our prayers are with the people of Paris,” said New York Mayor Bill de Blasio. “And you know, we know all about this feeling because of what we experienced on 9/11.”

Double Chin at Middle Age? Vacuum it Away
Zak Ebrahim: I am the son of a terrorist. HereR...
Beauty and Human Values
VIRAL FOOD: South Korea Gastronomic Voyeurism AKA ...

Travel: Sedlec Ossuary in the Czech Republic-- The Art OF Human Remains