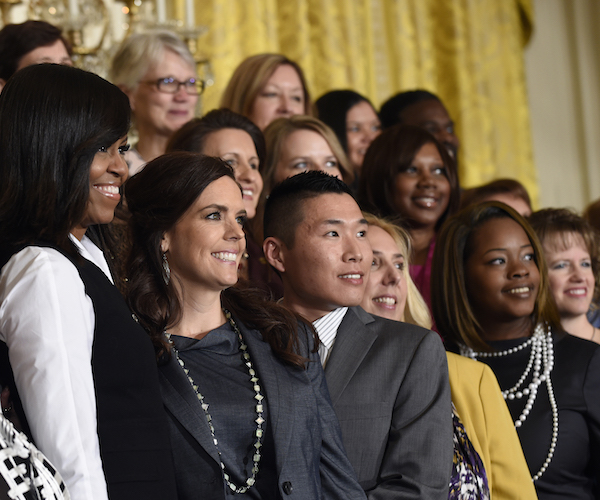 The sex ratio, or gender ratio, is a demographic term referring to the ratio of males to females in a population. It is an expression of the number of males for every 100 females. The ideal ratio is somewhere from 105 to 107:100, which means 105 to 107 men for every 100 women. This ideal ratio was first documented in 1710 and several other studies have confirmed those figures. Where men are more than females, problems such as homicide and violence may arise. Where women are more than men, a disparity in income earned between the two sexes is likely to affect the economy of a nation. A large number of unmarried women worsen the gender imbalance due to decreased births. The number of men is slightly more than the number of women in the world. However, they are countries where women outnumber men.

Martinique is an island in the Lesser Antilles in the eastern Caribbean Sea, with a land area of 1,128 square kilometres (436 sq mi) and a population of 386,486 inhabitants (as of January 2013).

In the Population Census, it was revealed that the population ratio in Martinique is 1183 females per 1000 of males.

Latvia officially the Republic of Latvia, is a country in the Baltic region of Northern Europe, one of the three Baltic states. It is bordered by Estonia, Lithuania, Russia, and Belarus, as well as a maritime border to the west with Sweden.

In the Population Census, it was revealed that the population ratio in Latvia is 1180 females per 1000 of males.

Lithuania officially the Republic of Lithuania (Lithuanian: Lietuvos Respublika), is a country in Northern Europe.

In the Population Census, it was revealed that the population ratio in Lithuania is 1172 females per 1000 of males.

Curaçao is an island country in the southern Caribbean Sea, approximately 65 kilometers (40 mi) north of the Venezuelan coast that is a constituent country of the Kingdom of the Netherlands.

In the Population Census, it was revealed that the population ratio in Curacao is 1168 females per 1000 of males.

In the Population Census, it was revealed that the population ratio in Guadalupe is 1162 females per 1000 of males.

6) Ukraine:
Ukraine is a country in Eastern Europe, bordered by Russia to the east and northeast, Belarus to the northwest, Poland and Slovakia to the west, Hungary, Romania, and Moldova to the southwest, and the Black Sea and Sea of Azov to the south and southeast, respectively.

In the Population Census, it was revealed that the population ratio in Ukraine is 1159 females per 1000 of males.

Armenia officially the Republic of Armenia, is a mountainous country in the South Caucasus region of Eurasia.

In the Population Census, it was revealed that the population ratio in Armenia is 1156 females per 1000 of males.

In the Population Census, it was revealed that the population ratio in Russian federation is 1153 females per 1000 of males.

Belarus officially the Republic of Belarus, is a landlocked country in Eastern Europe bordered by Russia to the northeast, Ukraine to the south, Poland to the west, and Lithuania and Latvia to the northwest.

In the Population Census, it was revealed that the population ratio in Belarus is 1152 females per 1000 of males

Estonia officially the Republic of Estonia, is a country in the Baltic region of Northern Europe.

In the Population Census, it was revealed that the population ratio in Estonia is 1137 females per 1000 of males.

If you’ve ever wondered, we’ve looked into it for you.

The data for 2015, which comes from the United Nations Population Division, shows the number of men for every 100 women in countries around the world. 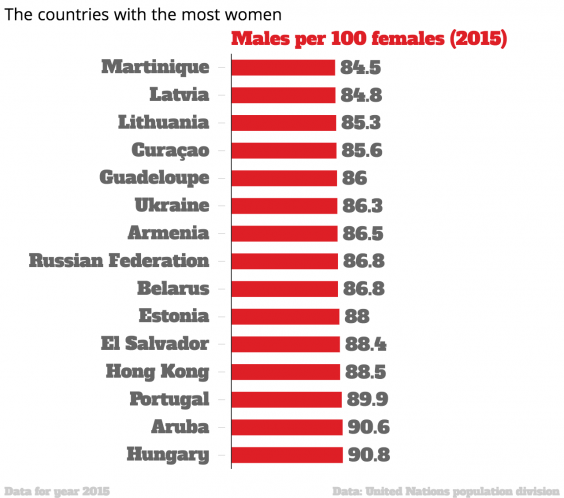 Whereas the United Arab Emirates has the most men, followed by Qatar. 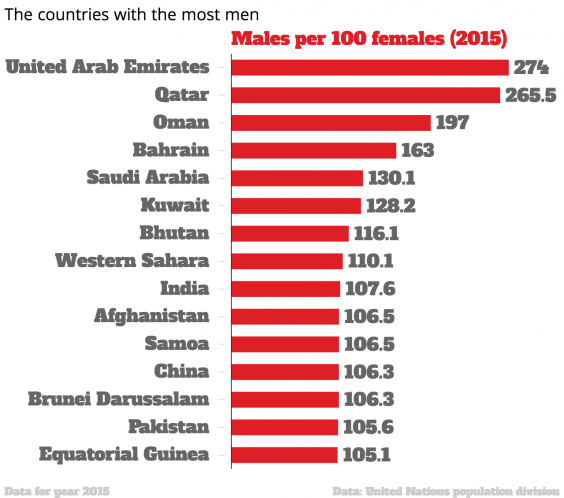 These ratios are largely determined either by conflict or a gender imbalanced culture.

For example, Russia took the most casualties from the Second World War and has been recovering ever since – in 1950 there were just 76.6 men per 100 women.

That number has been rising, reaching a peak in 1995, before declining again slightly – the figure is now 86.8.

In Latvia, a high mortality rate for young men is largely to blame.

Meanwhile, high ratios in the UAE and Qatar are partly due to a high reliance on expatriate male workers, while in China the case is due to a one child policy and a culturally ingrained preference for boys.

Gabriele Pellegrino, quora.com: The UN collect many demographics data and also make prediction about the future population of the World. They are available through a website: World Population Prospects – Population Division – United Nations. It is a very interesting website that allows to download all the data and even interactively select some part of it.

Using this source we can clearly see that the countries with the highest female ratio are the ones in Eastern Europe. I have excluded autonomous regions like Hong Kong, since they are not countries.

The main reason is due to wars, emigration of men and widespread violence. In fact, violence usually involve more males than females, both as victims and perpetrators. Interestingly you can see that most countries are predicted to improve, except for Russia, Belarus and El Salvador.

Other sources, like the CIA Factbook, confirm this ranking, except for Portugal that usually has an higher ration of 0.96, not sure why the discrepancy.

In the following map (created with Excel) you can see the data for all countries. Lighter blue means higher female to male ratio (more females than males).

Forbes.com: Oxford University has admitted more women than men onto its undergraduate courses for the first time in its more than 800-year history.

The world’s top ranked university made more offers to women and admitted more women students than men last year, according to new figures.

This represents perhaps the most significant milestone in the drive for gender equality at the university since previously all-male colleges began to accept women students more than 40 years ago.

While 1,275 women received offers to study at Oxford last year, 1,070 got the grades they needed to take up the place. This compares with offers for 1,165 men, of whom 1,025 met the required standard.

Although Cambridge also made more offers to women, more men took up places at Oxford’s traditional rival, according to data published by Ucas, the U.K.’s university admissions body.

Oxford first admitted women students in 1878, with the founding of the first all-women’s college. This was followed by four more women-only colleges, but it was not until 1974 that previously all-male colleges opened their doors to women.

The last all-male college voted to accept women in 1986, while the university has been fully co-educational since 2008, when the last all-women’s college started accepting male students.

But while gender equality has improved, the figures show there are still significant barriers facing students from disadvantaged backgrounds and ethnic minorities.

Students from the richest areas were more than 10 times more likely than their peers from the poorest backgrounds to attend high-tariff universities.

The data also showed that students with the same predicted grades and records of academic achievement were more likely to win offers from high-tariff universities if they came from more privileged backgrounds.

Black students were also the least likely to receive offers from elite universities, when compared with students from other ethnic groups with similar academic records.

Both Oxford and Cambridge have been criticized in recent years for the low number of black students enrolled on their undergraduate courses.

But there are also significant differences among white students, with white men from less privileged backgrounds the least likely to enter university.

Ucas chief executive Clare Marchant said that overall the data showed admissions were fair, and progress had been made to widen participation from under-represented groups at high-tariff colleges, large disparities remained at some universities.

‘Overall, people living in neighbourhoods with low entry rates to higher education, men, and the white ethnic group, are the least likely to enter university,’ she said.

The range of subjects on offer and the make-up of the local population are also factors in determining a university’s intake, she added.

Universities should use the data to explore the reasons behind the differences in offers made to students from underprivileged backgrounds or different ethnic groups, she added.

LIFE: Surrogate Mother And How Does The Process Wo...
Carly Rae Jepsen – Call Me Maybe
TRAVEL: Astana, The World’s Weirdest Capital...
25 AMAZING BRIDGES IN THE WORLD

The Little French Girl who played with Wild Beasts

Picture #1: To care for those who once cared for us is one of the highest honors... A Mother With One Eye and His Beloved Son

Liposuction for your jawline has never been trendier. But does it work?