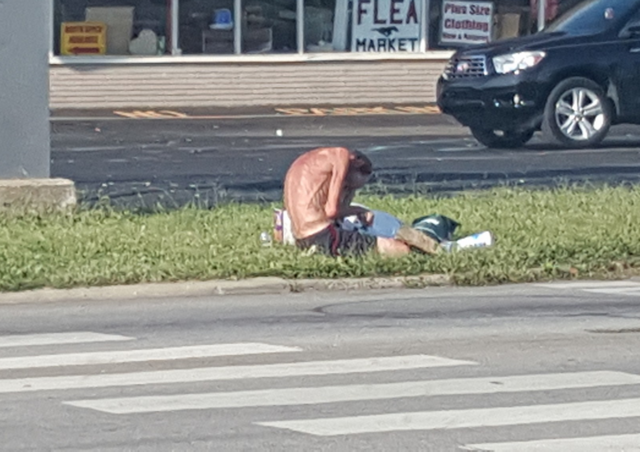 INDIANAPOLIS – A Facebook photo of a homeless man, possibly suffering from starvation, helped a family reunite with their loved one after seven years.

Johnny Servantez usually doesn’t interact with any homeless people he sees around the city. In fact, he says that he “NEVER gives panhandlers money,” because he’s come across one too many cases of frauds taking advantage of people’s good-heartedness.

But this time was different.

Servantez had seen this man before—and often did on his daily commutes.

“I was going to have a nice dinner tonight and spoil myself. I gave him the money instead. I actually pulled up to him and got out of my truck,” Servantez wrote.

“I had to give this poor guy some money,” Servantez explained on Facebook, before launching into an explanation. Some panhandlers don’t actually need the money, some spend it on unsavory things. He talked to this man, who said he had been that way once as well, an addict and a drunk, but had gotten clean and tried to put his life back together—to no avail.

The man broke down crying, thanking him for his help, and it humbled Servantez to his core. “He can’t catch a break.”

“But this guy’s stomach was hitting his back and [his] ribs’ popping out,” Servantez said. He hoped others would also stop to help the man. “If you are at Thompson and Madison… throw him a buck or two at least.”

Servantez added that this man wasn’t skinny by choice—he’s seen skinny drug addicts, and this man didn’t look that way. “This man is suffering from starvation,” Servantez said.

Servantez’s idea worked; comments flooded in from people in the area determined to help the man catch a break. Someone even went out to do some research and found a shelter that agreed to provide food, free medical, counseling, and educational opportunities along with a place to stay.

Then the most amazing thing happened.

The photo was shared more than 1,000 times and caught the attention of Johnny’s brother, Danny Rhodes. A man named Danny Rhodes saw the photo and recognized the homeless man: It was Johnny Rhodes, his brother.

“I’m so sick to my stomach right now,” Danny told RTV6. “I can’t function to know someone is living this way and looks this bad.”

He and his brother had lost touch seven years ago after the death of their mother, and Danny had no idea what happened to him.Danny said he has not seen Johnny since their mother died seven years ago. He knew he had a history of drug and alcohol abuse, but he was shaken upon seeing the way his brother was living.

Danny immediately wanted to find his brother to get him help. When he saw the Facebook post—which included locations where Johnny frequented—his family set out to search for him.

Late Monday afternoon, Johnny’s family found him once again and he was reunited with his loved ones.  Danny Rhodes says Johnny refused their offer of help, but he will continue to try to reach out to his brother.

Tuesday morning, Smith posted again, with an update on Johnny.

“He had two meals, a hit [sic] shower, a pair of clean clothes, a room to himself with quiet, a king size bed, tv w/ cable, fridge, a microwave, Pepsi, & leftovers. He is safe, and resting,” she wrote.