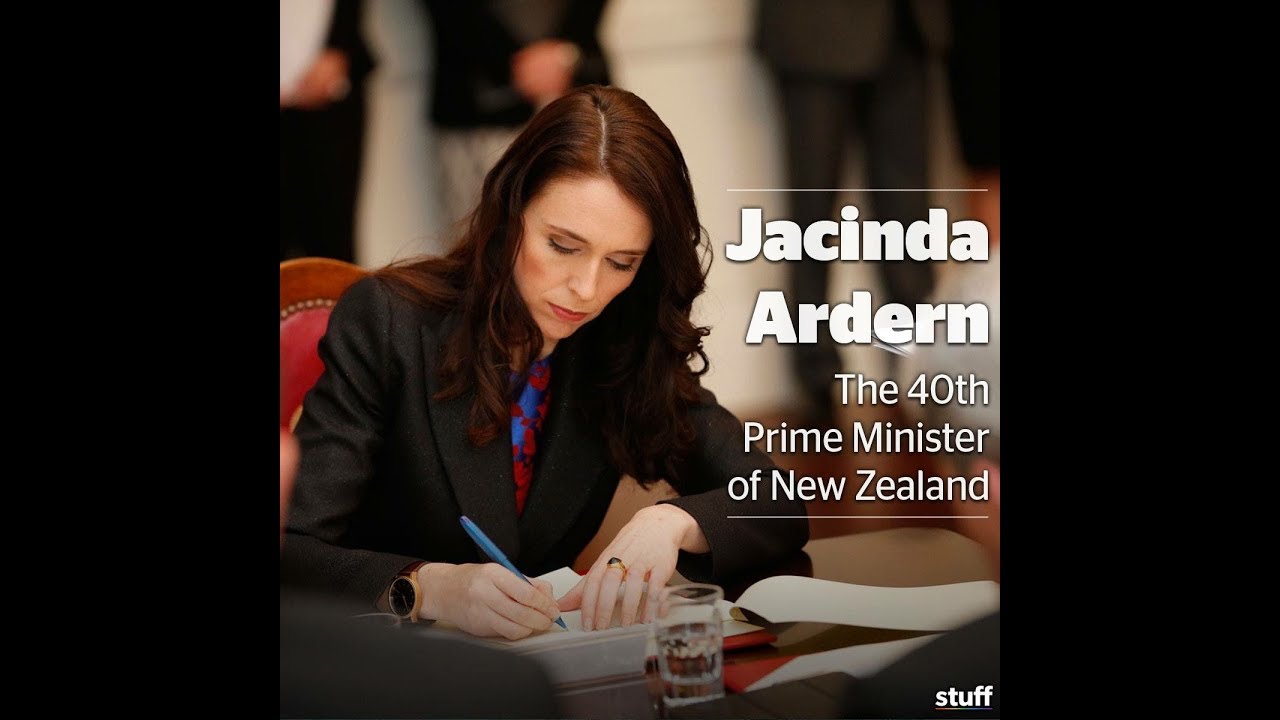 Apr.18.2018, nbcnews :  Jacinda Ardern will be only the second elected leader to give birth while in office, and the first to go on maternity leave. 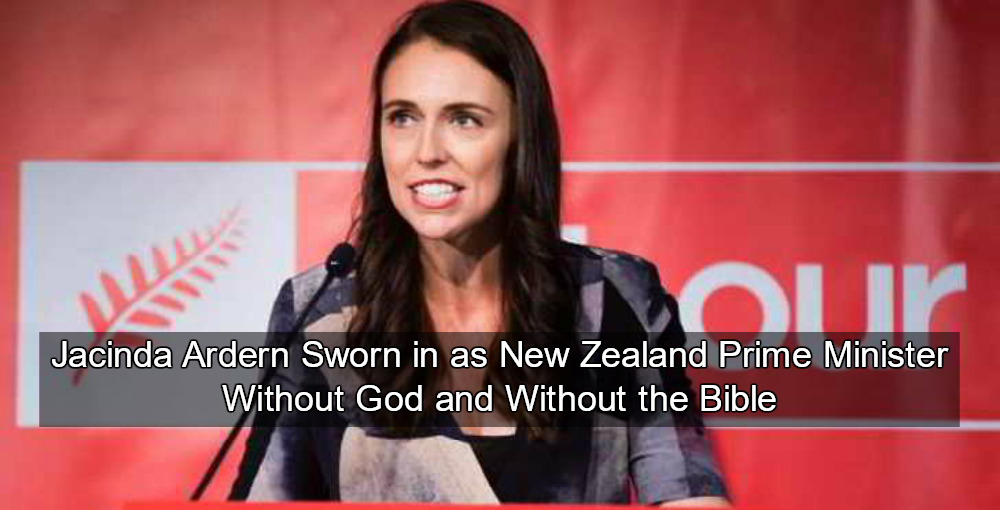 Source: patheos.com – Secular victory: Jacinda Ardern, New Zealand’s new prime minister, was sworn into office without the Bible, and without reference to God.

WELLINGTON, New Zealand — A verdant island nation at the bottom of the world — one of America’s closest allies — may have something to teach the U.S. about the role of women in public life.

Women in New Zealand could vote two decades before American women, the country is on its third female prime minister — and now the current officeholder, an unmarried 37-year-old named Jacinda Ardern, is about to give birth. In June, Ardern, the world’s youngest female leader, will become just the second woman in history to give birth while an elected head of state. She’ll become the first elected leader ever to take maternity leave.

“I don’t want to ever give the impression that I’m some kind of wonder woman,” said Ardern, an unpretentious wunderkind with an ever-ready smile. “Or that women should be expected to do everything because I am. I’m not doing everything.”

She’ll have help with childcare from the baby’s father, Clarke Gayford, her partner of four years. Gayford, host of a popular fishing show called Fish of the Day, is planning to be a stay-at-home dad.

The couple’s unwed status, she said, was not a “deliberate decision.” 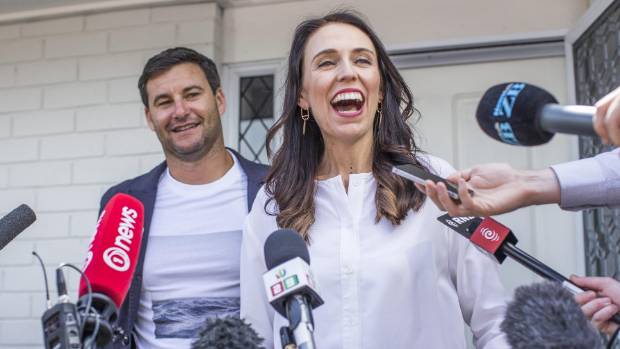 news24.com :New Zealand Prime Minister Jacinda Ardern has announced she is expecting her first baby, and is set to become the country’s first leader to give birth while in office. Image credit: stuff.co.nz PM Jacinda Ardern and Clarke Gayford

“It sounds terrible, because we’re very committed to each other. [Marriage is] just not something we’ve really gotten around to.” Ardern describes herself as a nerdy overachiever — an “absolute girly swot” in Kiwi speak — from an early age. The daughter of a police officer and a school lunch lady from a farm town on the North Island, she threw herself into left-wing activism, joining the Labour Party at just 17.

“My whole reason for getting into politics was because I had this strong duty to care for other people,” said Ardern.

She cast her first vote for Helen Clark, who became the nation’s second female prime minister in 1999. In 2008, Ardern became the head of the International Union of Socialist Youth, as well as the youngest member of the New Zealand’s parliament.

Because of the women who came before her, Ardern said, she never had the sense she couldn’t reach her goals. Another lesson New Zealand might be able to teach the U.S. about public life is how to disagree without demonizing.

Ardern became leader of the Labour Party just seven weeks before the September 2017 election. With an appealing political natural at the helm, Labour began a rapid rise from the depths of the polls, but on election day no party won a majority.

To form a coalition government, Ardern teamed up with the very conservative New Zealand First party. In American terms, that would be like Bernie Sanders joining forces with Ted Cruz.

Ardern agreed to give the leader of New Zealand First, Winston Peters, the post of deputy prime minister. He will be in charge of the country during Ardern’s maternity leave.

New Zealand has an image as a South Pacific paradise, with breathtaking mountains and beaches and unique wildlife, but it has political problems that would be familiar to Americans, such as homelessness and soaring housing prices. Like the U.S., New Zealand also has political divisions — deep ones — and more than half of voters chose a party other than Labour last fall.

But unlike the U.S., the country isn’t polarized. Even many of the people who didn’t vote for Ardern seem to be rooting for her now, won over by her humor and candor.

Dubbed “Jacindamania,” the post-election honeymoon is an added perk for the prime minister, who delights in the reactions of the little girls she meets. “If they see a woman in a job like this and it has an effect,” she said, “then that’s wonderful.”

Ardern’s priorities as PM include fighting child poverty and climate change, and she was critical of the recent U.S., French and British strike on Syria.

Yet as a candidate she engaged some issues similar to those in the divisive U.S. 2016 presidential campaign, albeit with a very different tone. She ran on cutting immigration, and has proposed making it harder for non-resident foreigners to buy local real estate. Foreign investment helped drive average home prices in the country’s biggest city, Auckland, up to $1 million NZ, out of reach for many Kiwis.

But she said she was “infuriated” when the Wall Street Journal compared her immigration policies to Donald Trump’s in a tweet. She’s not building a wall, she said.

“We’re campaigning to double our refugee quota,” said Ardern. “We are a nation built on immigration. The suggestion that I was leading something that was counter to that value made me extremely angry.”

On Thursday, the Ardern charm will be on display in London, where, among her other duties, she’ll meet Queen Elizabeth at Buckingham Palace.

The queen is officially New Zealand’s head of state. Headlines during Ardern’s campaign suggested she wanted to “Ditch the Queen.” She has said she believes New Zealand will become a republic during her lifetime — meaning the tie to the crown would be severed.

Asked how that might go over at the palace, Ardern laughed.

“[The queen’s] response has always been these are matters for New Zealand,” she said.

She said she won’t push the issue, at least not now. Leading the country, having a baby and taking on the Queen might be too much even for her.

F3News,April 20 2018  : Prime Minister Jacinda Ardern has met the Queen as one of the four of the 19 new Commonwealth leaders granted a private audience. Prime Minister Jacinda Ardern chats with the Queen during a private audience at Buckingham Palace. But once the doors had closed the discussion would have been more in-depth. Ardern would not comment in detail about what she discussed with the Queen – to do so would be “a break in protocol” – but said she felt “exceptionally lucky” to have had her time with the monarch.

F3News: Ardern is greeted by the Queen as partner Clarke Gayford trails behind.

This is The Prime Minister Of New Zealand, Jacinda Ardern. She’s 37. She’s the youngest female head of government in the world. She’s also the first western woman to give birth while in power. 2 days after the baby was born – with midwives, standard in NZ hospitals – she introduced her to the country during a press conference on the nightly news. It was really lovely. She named her Neve Te Aroha. Te Aroha means “The Love” in Maori. It represents ALL the names that were submitted (upon her request) from various tribes throughout the country, and was her attempt at capturing them all.
This is her and her partner, no, he’s NOT her husband (gasp!), walking to the press conference. He’s TV fishing show Host Clarke Gayford, and HE will be staying at home with baby Neve when his lady goes back to running the country in 6 weeks. Clarke sports a snazzy sweater he picked up at the op-shop (second-hand store) in Gisborne, and thinks its just kinda logical that he gives up his day job to stay home and look after the baby.

A week after the birth on July 1st Jacinda introduced a $5billion Families Package that she’d drafted on the floor of her friends house in Hastings – before her pregnancy. It’s based on the knowledge that the first few years of a babies life are the most important. The package gives an extra $75 a week to low-income families with new babies, and an extra $700 to families for winter heating costs as well (it’s cold as hell down there in the winter). It also increases the Paid Leave for all new parents from 18 weeks to 22 weeks. She announced the details via Facebook live, from her couch, right after she’d finished breastfeeding the baby. Because Kiwis. Some of the most down-to-earth, no-drama-having, just-do-it kind of people you’ll ever meet.

And because Women. We really do know how to lead, and to do it well.

God Gave Me You by Bryan White

Love Is Blind by Ramzi