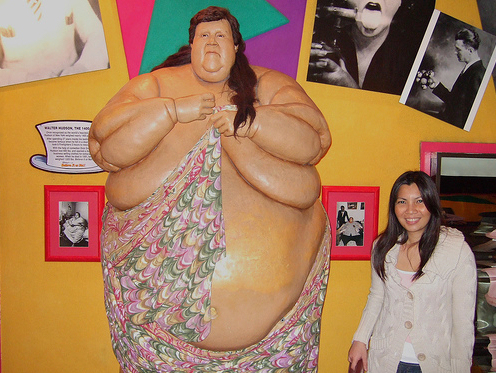 Longest Hair in the World 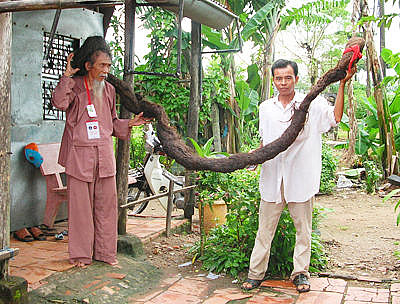 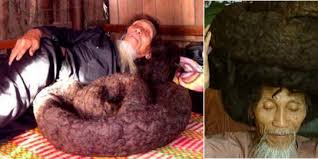 Tran Van Hay was the man with the longest hair in the world. At a young age he cut his hair once- but got really sick right after. Being the superstitious man that he is- he just decided to never cut it again. For over 50 years he let it grow and some say he didn’t wash his hair for over a decade!  Hay, whose hair weighed several pounds, died in February 2010 at the age of 79. His Leviathan shaped dreads were measured at 6.8 meters at that time. Now the world’s longest hair record belongs to a woman named Xie Qiuping from China. She has been growing her hair since 1973 and is now at 5.62 m. She still has a long way to go if she wants to catch up with this guy- but all the best to her! 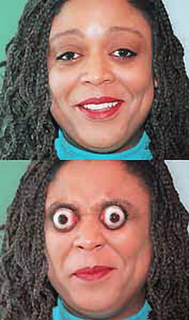 Kim Goodman is able to pop her eyes out of her sockets by a freaking 12 millimeters (0.47 inches). That amazing feat giver her the eyepopping record for farthest eyeball protrusion in the World. She discovered her unique talent one day when she was hit on the head with a hockey mask (holy hell… that must have been a traumatic experience for all parties involved!). Her eyeballs popped out much further than usual and ever since she could pop them out at will. However they can also pop out unwanted, especially when she yawns! Francisco Domingo Joaquim from Angola is the proud owner of the title ”World’s Biggest Mouth”. His mouth measures 17 cm (6.69 inches). Francisco was discovered by Guinness Book or Records researchers who were scouting Youtube for new talent. After a two year search- they were finally able to catch up with him and officially measure his massive mouth. Check out the video to witness the full bizareness of Francisco’s “jaw dropping talent” (again pun intended)!

Meet Jyoti Amage, a 18 year old Indian student who Indian student stands just 24.7 inches tall, making this bundle of joy stand at around the same height as a Coca Cola bottle! Amge was formally crowned the world’s shortest teenager, and stands about three inches shorter than Bridgette Jordan, the American woman who held the shortest woman title before her. Amge, who has a form of dwarfism called achondroplasia, is not expected to grow any more. Off course her size makes certain things harder for her, but she truly is a bundle of joy and perfectly happy with her size. Amage has dreamed of becoming a Bollywood star and plans to pursue a college degree. 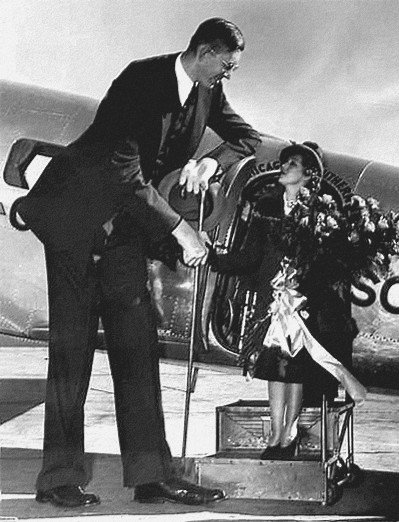 Robert Pershing Wadlow (February 22, 1918 – July 15, 1940) was the tallest person in history for whom there is recorded evidence. Wadlow reached 8 ft 11.1 in (2.72 m) in height and weighed 439 lb (199 kg) at his death at age 22. His great size and his continued growth in adulthood was due to hypertrophy of his pituitary gland, which results in an abnormally high level of human growth hormone. He showed no indication of an end to his growth even at the time of his death. The current tallest person is Sultan Kosen, but with a ‘measingly’ 2.51 m (8 ft 3 in) he would have looked like a dwarf compared to Robert. The largest natural breasts in the world belong to Annie Hawkins-Turner (aka Norma Stitz) (USA) who has an under breast measurement of 109.22 cm (43 in) and an around chest-over-nipple measurement of 177.8 cm (70 in). Her bra size of 102ZZZ scares the crap out of me personally- but apparently she is forced to hire security to protect her against unwanted grabbers who ‘chase’ her. Yup that is pretty bizarre…

World’s Hairiest teenager… is a girl! The hairiest teenager is Supatra “Nat” Sasuphan from Thailand.(Thailand). She was measured on the set of Lo Show dei Record in Rome, Italy, on 4 March 2010. Supatra was diagnosed with a rare condition that causes hair to grow in places it normally shouldn’t. Of course that condition has made things difficult for her at times. Like having to wake up 1 hour earlier than most people to comb her whole face… But Nat is perfectly happy and doesn’t feel different than anyone else. Now a celebrity, she’s starting to enjoy her fame, and was thrilled by the chance to visit a foreign country. “It’s really fun and exciting,” she said, “and it’s my first time on a plane. I’ve never been outside Thailand.” But her most exciting experience was the moment she was crowned Hairiest Child. “Being hairy makes me special,” she said, adding: “This the happiest day of my life!”. 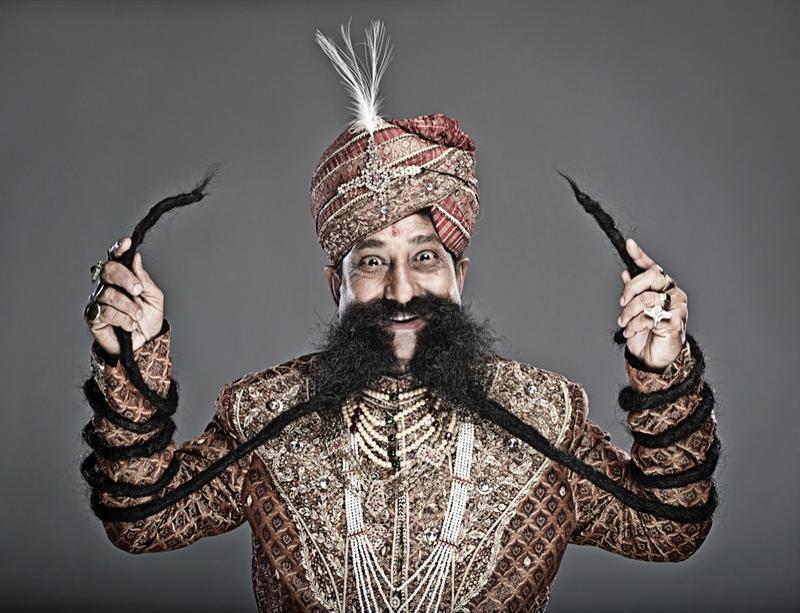 Ram Singh Chauhan of India is the proud owner of the world’s longest mustache, officially recorded by Guinness World Records as 4.29m (14ft) long. Chauhan spends an hour every day cleaning and combing his mustache. “I massage it and oil it regularly and I wash it every 10 days which takes a long time,” he says. “My wife helps me.” His wife wasn’t always this supporting though. Chauhan’s wife Asha says they used to fight over his mustache in the early years. “He used to take a long time to get ready, to wash and also people used to stare at him,” she says. She didn’t feel comfortable. But later, as he started getting recognition for his long mustache, she started to like it and to respect his commitment. Now, she says, the mustache is like a part of the family and she shares his pride in it.

Mehmet Ozyurek is the proud title holder for the world’s biggest nose . His giant Schnozola measures an incredible 3.46 inches. That means a fart in a elevator could be downright lethal for this guy! Apparently his record has been broken by Faizan Agha- who won by a nose (pun intended) during an epic standoff in a still unknown location. However his schnauzer was never officially measured by Guinness- making Mehmet still the current title holder. 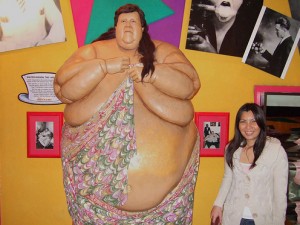 Walter Hudson of Hempstead New York holds the Guinness World Record for the largest waist. It measured 119 inches (3.02 m) in 1987 when he was at his peak weight of 1,197 lbs. He was considered the fourth most obese human in medical history. Hudson made headlines after becoming wedged into his bathroom doorway and having to be rescued by firefighters. It took 9 men to move him back onto his reinforced bed. The media picked this up big time and he became a celebrity overnight. Hudson- who hadn’t left his house for over 15 years- got inspired by the attention and support he was getting and went on a hardcore diet that made him lose almost 800 pounds! His goal was to be able to walk outside unsupported and greed the media, which he did. Unfortunately he started eating again soon after- and went back to a staggering weight of 1.125 lbs.  Soon after that he died from a heart attack on December 24, 1991, at age 46 . He was buried in a specially-constructed, steel-reinforced coffin that was 54 inches (1.4 m) wide, 40 inches (1.0 m) deep, and 88 inches (2.2 m) long. HEALTH: The Powerful Intravenous Vitamin C In Canc...
RELIGION: 26 Unusual Death Rituals from Around the...
Violence Against Women: Rape in an Immoral Culture
HEALTH EDUCATION: What’s Wrong With Psychiat...

HEALTH EDUCATION: Foods That You Think Are Healthy But are Not

Pray with a Wakeful Heart and Remember the Almighty with Sincerity

Don’t cry because it’s over, smile bec...
Zak Ebrahim: I am the son of a terrorist. HereR...
LOVE: Moroccan King’s Love At First Sight Re...
10 Famous Celebrities With Mental Health Disorder

Don’t cry because it’s over, smile bec...
Zak Ebrahim: I am the son of a terrorist. HereR...
LOVE: Moroccan King’s Love At First Sight Re...
10 Famous Celebrities With Mental Health Disorder