In the China subway, people thought that this man was committing suicide deliberately.

After a woman from China has gained the internet’s major disapproval after she was filmed forcing his father to jump on the train tracks for the insurance claim. 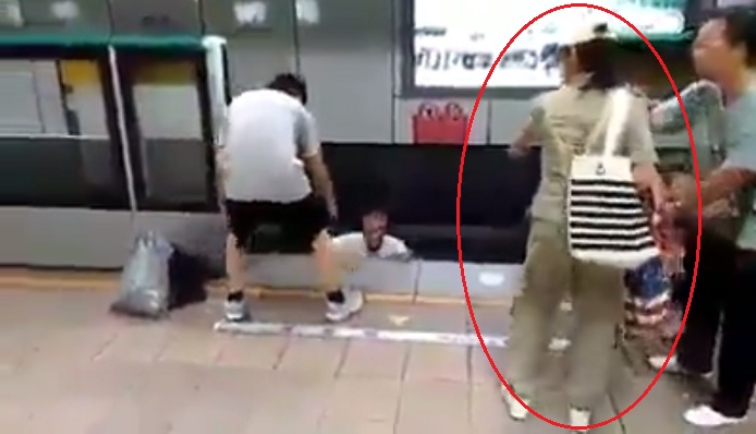 It is sickening that people can kill their own family or relatives because of money which is happening these days in real life.

Why do family members are killed because of life insurance? Because of buying life insurance, family members consider the policy as a good way to pay off debts or it’s the fastest way to acquire an instant fortune. And the daughter from China is one of those who dream of instant fortune from insurance claim who allegedly asked his dad to commit suicide in a Chinese railway for insurance claim.

In the footage, a man can be seen into the tracks  and just stood there, seemingly waiting for the train to run over him. But because he jumped too early, the train is not there and he waited.

While other commuters were screaming, a good samaritan thought that the man is out of his mind, so he rushed to him and  helped him out in a haste as the train could arrive any second and the old man might be hit. The stranger successfully  saved the old man but a woman furiously stopped them and began kicking the old man to the train tracks.

The old man’s savior and the rest of commuters were shocked upon learning that this woman was actually his elder daughter. The furious woman screamed at the other passengers to stop interfering.

Security forces on duty intervened and stopping the woman from pushing the man back to the railway line. The woman wanted her dad to kill himself so she could collect his insurance money but her plan failed when the other commuters saved him.

The unnamed woman insisted to get closer to her dad, but the guards don’t allow her as she is so angry and challenged everyone who tried to stop her.

Sympathy to the old poor man. Just hope that she will be jailed to prevent her from doing this again to her dad.

ANOTHER INCIDENT ONTO TRAIN TRACK..

SHOVING WOMAN ONTO TRAIN TRACK – FOR NO REASON AT  ALL

CREDIT: STEEL BODY
Published on Oct 22, 2017
Passengers standing on train platforms are usually advised to stand clear of incoming trains. Unfortunately, one woman didn’t see anything coming for her – quite literally – when she fell onto a train track in Hong Kong on Saturday morning (Oct 21). And that’s because it was a man who had shoved the 59-year-old cleaner from behind – for no apparent reason at all. The incident occurred at a train station in the town of Yuen Long, said the South China Morning Post (SCMP). The man is seen in a now-viral CCTV video footage approaching the train station employee from behind at Yuen Long terminal. Once the woman, surnamed Leung, stops to chat with an acquaintance on the opposite side of the platform, the 56-year-old man suddenly reaches out his right hand and pushes her onto the rail track. He then calmly walks away without looking back. Thankfully, there was no train coming through at that time.A police spokesperson told SCMP that the victim “suffered injuries to her jaw” and was sent to Pok Oi Hospital for further checks. The man, who is understood to hold a Hong Kong identity card, has since been arrested. Police also said a criminal investigation was launched against him.

Evanescence – My Immortal Lyrics : Twilight ...
NATURE: Indoor Plants For Positive Vibes In Life
Adam Wynne Amazing 3 Year Old Irish Snooker Kid
“I Will Be There For You” – Jess...

Crazy Love 1: Obsessive Roller-coaster Relationship of Burt Pugach and Linda Riss, Which Shocked The Nation During The Summer of 1959