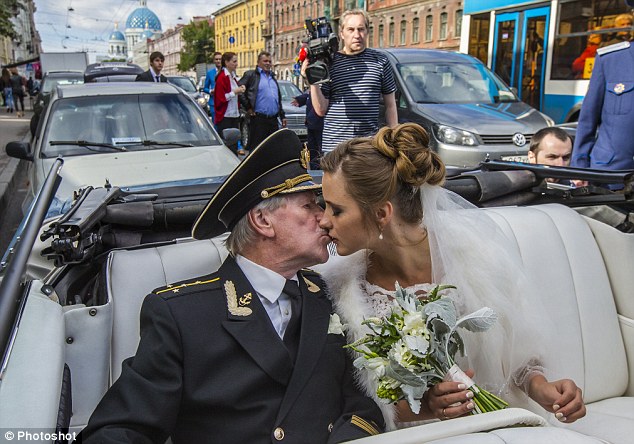 “A successful marriage requires falling in love many times, always with the same person.” – Mignon McLaughlin

“A great marriage is not when the ‘perfect couple’ comes together. It is when an imperfect couple learns to enjoy their differences.”
– Dave Meurer

A 20-year-old young girl marrying a 75-year-old man. In many countries like Saudi Arabia and Iran young Muslim women from poor families are brought for money by the Sheikhs and rich people even today. (tamilcnn.ca)

“A 92-year-old man in Iraq marries a woman 70 years his junior. Muslai Mohammed, one of the most prominent figures in his village, decided to get married three years after the death of his first wife, who died aged 58. “I remained alone when my wife died, there was nobody to share anything with. I wanted to have a good time, have some pleasure, but there was nothing. Then God brought her to me, for my pleasure. Is that good or bad?,” he said. Muna al-Jabouri, his new wife, said: “I accepted (to marry him) when I saw his pictures and realised it was my fate.” Report by Katie Lamborn.” (juancole)

Nigerian man, 28, marries 71-year old white woman.. 43 years difference in their ages, the couple expressed they got married because they are deeply in love. However, many Nigerians are saying this wedding maybe for other reasons but love. Men prefer SMARTER women and couple with a female breadwinner and more likely to last. Female earner: Kate Moss reportedly earns an average £4million a year, a far greater sum than that of her musician husband Jamie Hince (dailymail) Russian actor Ivan Krasko, 84, ties the knot with his 24-year-old fiancée – and now they plan on starting a family. (dailymail) 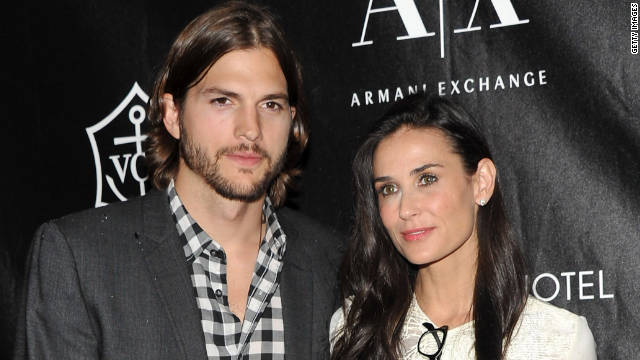 Demi Moore and Ashton Kutcher’s marriage, which lasted for eight years despite the 15-year age gap.

72 year old billionaire,Emmanuel Iwuanyanwu , last 2013 shut down the airways when he decided to marry Frances Chinonyerem Enwerem,   a woman almost 50 years his junior.

Ugandan singer, Guvnor Ace, 26, became the talk of the town in Uganda when he married his 68 year old Swedish ladylove, Mona Lisa Larsson in a court wedding ceremony in Kampala,Uganda. 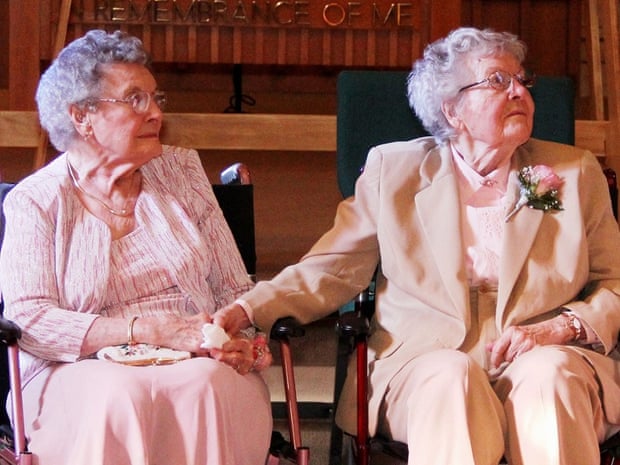 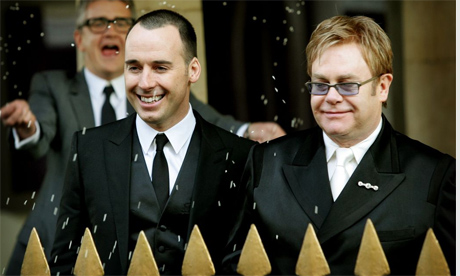 Elton John and David Furnish at their civil partnerhip ceremony at the Guildhall in Windsor. (theguardian) An Iranian boy, 14, married to a 10 years old girl on August 14, 2015. The couple, who are under the legal marriage age in Iran, reportedly got married on Aug. 14, after having obtained permission from authorities. (http://tribune.com.pk/) 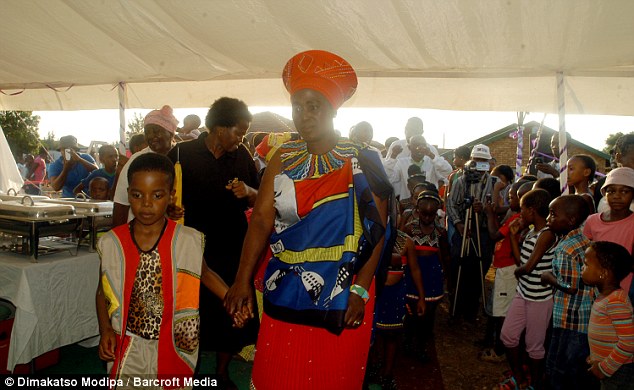 An eight-year-old schoolboy has married a 61-year-old woman because the ghost of his dead ancestor told him to. Sanele Masilela tied the knot with Helen Shabangu, who is already married and a mother-of-five. The boy, from Tshwane, South Africa, said he had been told by his dead ancestors to wed and his family, fearing divine retribution, forked out for a wedding. They paid £500 for the bride and a further £1,000 for the big day, which was organised in just two months. (watchmanafrica.blogspot.com) And the future for newlyweds Edith Hill, 96, and Eddie Harrison, 95, is very much uncertain. The two have been companions for more than a decade after a Hollywood-style meet-cute — they struck up a conversation while standing in line for lottery tickets, with one of the tickets turning into a $2,500 winner. They married earlier this 2014, with a 95-year-old church elder presiding over the ceremony, no less. (newsleader) Ellen DeGeneres, pictured with wife Portia de Rossi, was one of the first stars to welcome Barack Obama’s statement in support of same-sex marriage. (heraldsun.com.au) 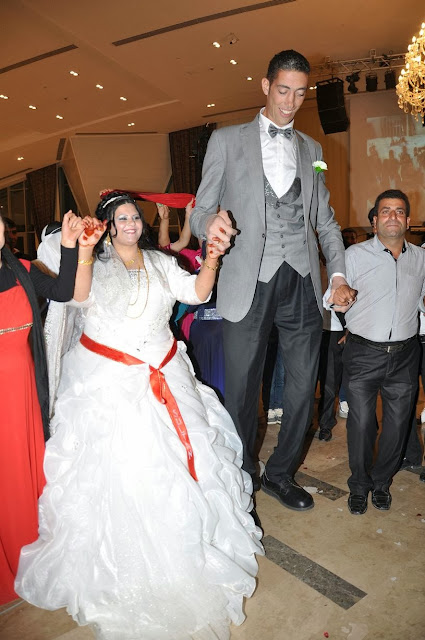 Turkish giant Sultan Kosen, who stands over eight feet tall, is almost three feet larger than his new wife The world’s tallest man has has married – and his new bride barely reaches his waist. (brimtime)

PIR MAHAL (Dunya News) – A three feet tall, 22-year-old Scottish man of Pakistani origin has found the love of his life, the five feet tall bride in Pakistan’s remote Pir Mahal, Dunya News reported. Bridegroom Rehman admitted that short height was a hurdle for him to find a match. He said that now his wish has been fulfilled upon which he is overjoyed. (dunyanews)

Thailand tragic love story: 29-year old Sarinya Kamsook and her 28-year-old boyfriend, Chadil Deffy, had been together for 10 years and were to be married in 2012. Merely days before the wedding, Sarinya was involved in a car crash, leaving her severely injured. She still could have been saved with timely medical attention. However, the doctors made her wait for 6 hours due to an overcrowded ICU instead of transferring her to another hospital. During this time, she succumbed to her injuries and passed away. After Sarinya’s untimely death, he couldn’t let her go without fulfilling her deepest desire. So, he decided to marry her anyway. On the 4th of January, 2012 in Buddhist ceremony, Deffy married the corpse of his girlfriend. The event took place in Surin, a city in northern Thailand. (oddity)

A Wedding That Will Move You: Rowden & Leizel– Terminally ill groom fulfills last wish, dies 10 hours later. Early this year, Rowden and Leizl decided to get married on July 8, 2014, Rowden’s 30th birthday. Together with their adorable 2-year-old daughter, they already had a perfect family. Then a twist of fate, Rowden got diagnosed with stage IV liver cancer in late May. His last request was to marry his one true love. After 12hours of preparations, his dream was fulfilled. Unable to take him outside the hospital, we brought the church to him. It was like a heartbreaking fairytale. Rowden Go, at the age of 29-years-old, passed away on June 11, 2014. Less than 10hours after he said his vows. (kickerdaily) 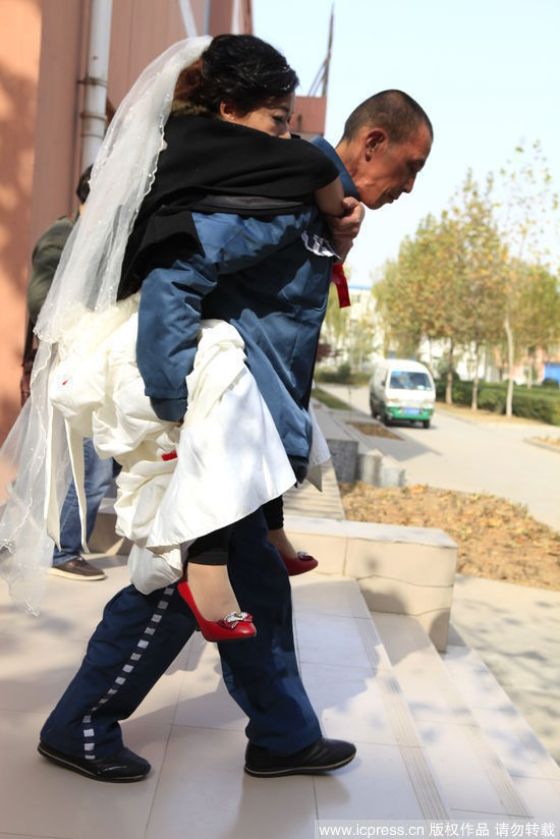 Unable to walk, the groom carries his bride: Man who stole to pay for his terminally ill girlfriend’s medical expenses marries her while in prison She, 37-years-old, late stages of cancer. He, 42-years-old, in order to get money for her treatments, stole and was sent to jail, his sentence 4 years. As a woman, her wish is to wear a wedding dress just once in her life. As a man, for this woman, he has given everything, and in order to realise her wish he took her hand and walked her down the aisle. On the 12th November 2010 in Henan Province Jiaonan Prison Meizi had a beaming smile on her face, but was staggering as she walked, and the wedding ceremony originally planned to be half an hour only lasted for 10 or so minutes before being hastily ended because she just couldn’t carry on. Nonetheless, this fairy tale-like wedding moved the few hundred guests present to tears. (chinasmack)

Dying 8-year-old boy “married” his sweetheart Figure Fleming (Reece Fleming) and Eleanor Parsglav (Elleanor Pursglove) have been friends since childhood. Rice has always been in love with Eleanor and said he wanted to marry her. He asked for her hand several times before, despite the fact that, in fact, they were still young children. In 2004 he was diagnosed with leukemia, and in 2008, when he was told that he continues to live only a few weeks, he decided at any cost to exercise their cherished desire and marry Eleanor. He asked her the question one more time, and she finally said yes. “Wedding” was held in July 2008. Little bride arrived in a limousine, and the groom waiting for her at her home. By the time the rice was already very weak, but his determination to fulfill his desire to support him. He gave her a red rose, and they exchanged vows and rings in front of their mothers. They even signed the marriage certificate. Small groom right after the ceremony went to bed, feeling completely peaceful. He turned to his mother and said, “Mom, now I can go.” He died the next day. (oddstuffmagazine)

Sweet: Nurse Matt hugged his little ‘bride’ before lifting her surgical mask ‘veil’– A young leukaemia patient has ‘married’ her favourite male nurse in an adorable mock wedding. Staff at the Melodies Center for Childhood Cancers at Albany Medical Center, New York, treated four-year-old Abby to the ceremony. The floor was covered in rose petals and the groom, Matt Hickling, wore a tuxedo t-shirt with scrubs. Staff organised the event in 12 hours, after Abby, who is battling acute lymphoblastic leukaemia, told her mum that she was going to marry Matt. They spared no detail, providing ring pops for wedding bands, and a pink toy car with a ‘Just Married!’ sign for the happy couple to scoot off in. The groom said on his Facebook page, “This day will hopefully be one our patient and her family can always look back on and smile when days are tough. I know I will!” Fellow nurse Lori Ciafardoni posted the adorable video to Facebook, saying, “THIS is why we go into nursing.” The blushing bride reportedly told her mother, “This is the best day ever!” Abby’s mum also wrote on her Facebook page documenting Abby’s journey, “We are so blessed to have these amazing people in our lives. Thankful for them every day.” (mirror.uk)

Maya, 8, and Kishore, 13, pose for a wedding photo inside their new home, the day after the Hindu holy day of Akshaya Tritiya, called Akha Teej in North India (alexiafoundation)

47 couples got married in the event (Courtesy to the New York Times) : A mass wedding that took place in Nablus one recent balmy evening was the latest step toward the rebranding of this Palestinian city from a focus of chaos and violence to a model of stability in the West Bank, the New York Times reported on Monday. The event, one of the most exuberant in recent years, was a riotous, joyful affair, bringing together 47 couples and Palestinian revelers from Nablus and its surrounding villages and refugee camps, into the amphitheater in the municipal park. “We are a dispersed people,” Hassan Assayes, 53, a sculptor and the oldest of the grooms, was quoted as saying by the newspaper. “This is a sign of unity.” I wanted to convey a message to the world that we in Nablus, and Palestine in general, can live as human beings, enjoy life and achieve our political goals Muhannad Rabi 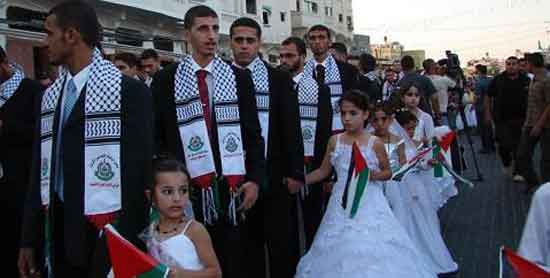 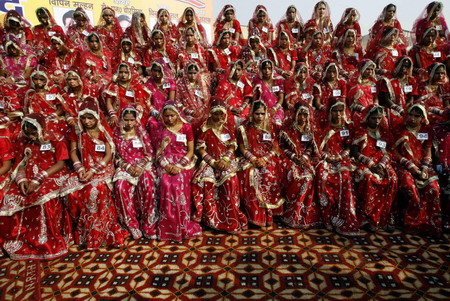 Bejeweled brides attend a mass marriage ceremony at Noida on the outskirts of New Delhi December 17, 2011. A total of 101 couples from across India exchanged wedding vows on Saturday during the mass wedding ceremony arranged by a voluntary organisation, organisers said. [Photo/Agencies] (chinadaily) 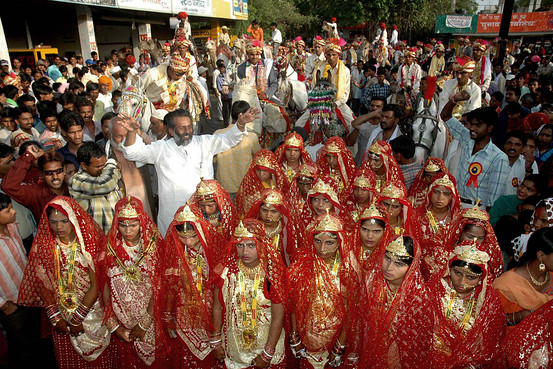 Agence France-Presse/Getty Images: Young women during a mass wedding ceremony the occasion of “Akshaya Tritiya” in 2006 near Bhopal. As India celebrated Akshaya Tritiya on Tuesday, a festival associated with mass weddings, many activists renewed their calls against child marriage. “Raise your voice against child marriage on #AkshayTritiya, an auspicious day for Hindu marriage in India,” UNICEF India said on Twitter. There are many campaigns around the world against child marriage in India, where the practice remains common despite being illegal. Perhaps the most original one is “The Girl Store” – which some may find is in bad taste. (blogs.wsj) 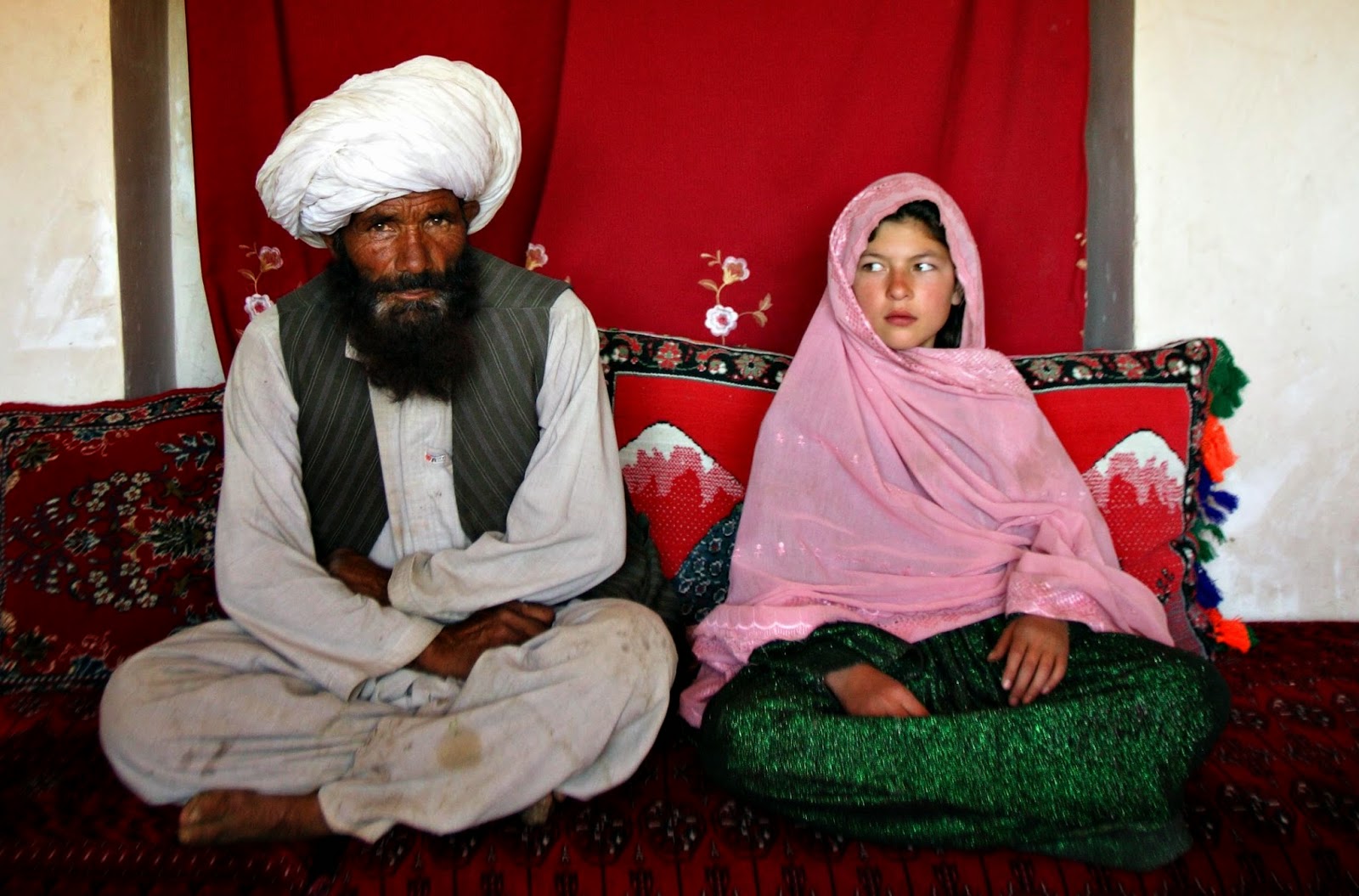 Child Marriage and the Rest of the Maranatha Story (www.patheos.com)

Balochistan and Some Amazing Photos of Balochistan
PHOTOGRAPHY: What Make These Eyes Beautiful?
Health: Parenting and Kids That Kill Without Consc...
LIFE OF IRENA SENDLER: Woman hides thousands of ch...

Balochistan and Some Amazing Photos of Balochistan
PHOTOGRAPHY: What Make These Eyes Beautiful?
Health: Parenting and Kids That Kill Without Consc...
LIFE OF IRENA SENDLER: Woman hides thousands of ch...