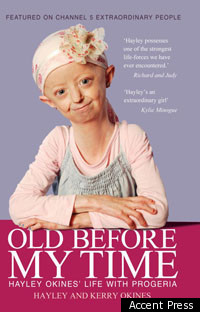 Hutchinson-Gilford Syndrome otherwise known as Progeria is a genetic disease meaning that the small bits and pieces from a mother and father created someone who is very special and different from many of us. It is sometimes known as the “aging disease” because the children who are affected by it may appear to be old.

Do NOT worry, Progeria is not contagious meaning you can not get it from playing, touching, or hugging someone who has it. It is something they are born with.

Someone who has Progeria is very special, because very few people in the entire world have it. In fact only about 74 known cases have been documented.

Children with progeria are born looking healthy, but soon display characteristics of accelerated aging, such as failure to grow, stiff joints and loss of body fat and hair.  In addition, they may have larger heads than the average person. It is important not to make fun of someone or stare at someone who is different from the rest. They function the same as you and in many cases are smarter than the average child. Rarely living past 10 to 15 years of age, the genetic disorder is unlikely to be inherited. The early signs mimic a failure to thrive, but as time goes on, these symptoms appear:

Then, as Progeria progresses, these symptoms manifest — not unlike otheraccelerated aging disorders: 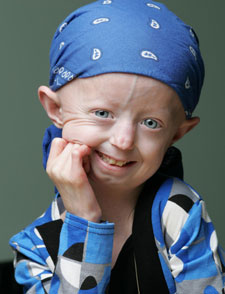 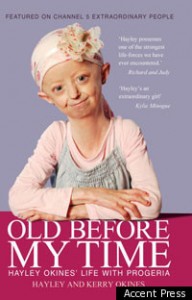 This isa English girl Hayley Okines. She is nine is this picture,
but she has the body of a women that is 70.
There are only 74 known cases of Progeria in the
world, of which 2 from the UK, those two include
Hayley herself and another person. 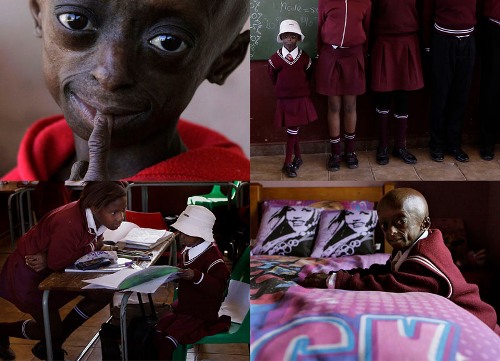 12-year-old South African Ontlametse Phalatse, growing older is not a choice. This small girl with a big personality is one of only 80 children in the world diagnosed with progeria, a premature aging condition. 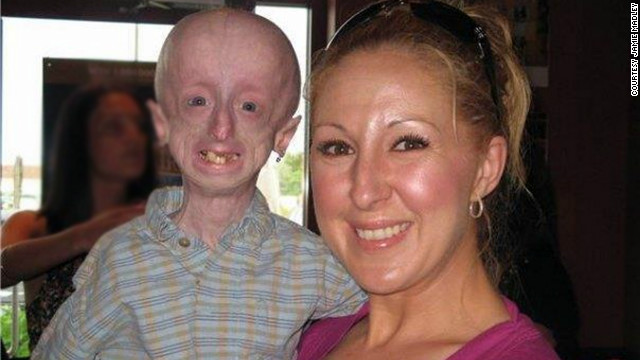 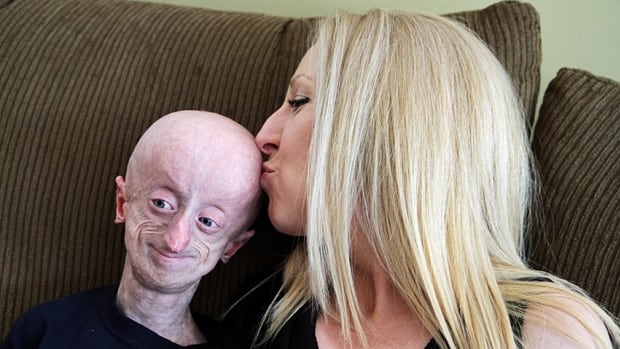 Devin Scullion and his mom, Jamie Madley, have been through a lot

According to the Mayo Clinic, they can also have the following:

Photo: Find Me A Cure

Less commonly they  may have:

Miles and his sister, Clementine

It is important to note that despite all the odds against them, children with Progeria are average to above average in mental intellect. In other words, Progeria does not affect intellect or brain function whatsoever.

Appearing premature at birth, the genetic disorder only occurs in one out of 8 million babies. Progerian children are so small that even as a teenager, they typically weigh 30 pounds and are 3 and a half feet tall, the average size of a 2-year-old. Their bones quickly become brittle and leg bones morph into a severe bowl-legged shape.

Just over 80% of Progerian deaths are caused by heart attacks or congestive heart failure. Little is known about the disease, but it is thought that it is equally dispersed amongst the races and sexes. Only 100 cases have been documented since it was discovered in 1886. There is no cure for Progeria. According to this site there are currently 64 children living in 30 countries that have Progeria. Different studies indicate that progeria is caused due to mutation of a specific gene called lamin A or the LMNA. This gene plays a vital role in the production of a protein responsible for holding together the nucleus, i.e. the center, of a cell. Researchers are of the opinion that this defect arising from the genetic mutation causes the cells to become unstable, eventually causing the varied signs and symptoms of aging that are linked to progeria.

Progeria is not a hereditary condition and hence cannot pass down in families. It is understood that the mutation occurs on its own, usually at the time of conception, when either a single sperm or egg develops errors or defects.

It may however be noted that other similar conditions like the Wiedemann-Rautenstrauch syndrome can be inherited. Fetus with the Wiedemann-Rautenstrauch syndrome experience the aging process within the womb itself, and the symptoms are clearly visible post birth. It generally begins during the teens or early adulthood, causes rapid aging, and shortens the life span of the patient.

Progeria has no known cure. Treatment is aimed at managing the symptoms and preventing the onset of complications.

There is no cure and no prevention. Again, very little is known about Progeria. Any surgical procedure involving the bones, such as growth encouragement, is very inadvisable. It would significant damage the child and their prognosis.

Photo: the many faces of spaces

Progeria is unlikely to be discovered in utero, according to research. Crowds should be avoided, because these children are so small and fragile that they risk injury.

The Progeria Research Foundation is constantly looking for answers, cures and preventatives. Their site is the go-to source for parents seeking help for their child. Hayley Okines with her mom PHOTOGRAPHY: Iconic Photos of Celebreties
RELIGION: MONTH OF RAMADAN AND THINGS THAT BREAK A...
How The Spine Causes Pain to Your Internal Organs?
Pray with a Wakeful Heart and Remember the Almight...