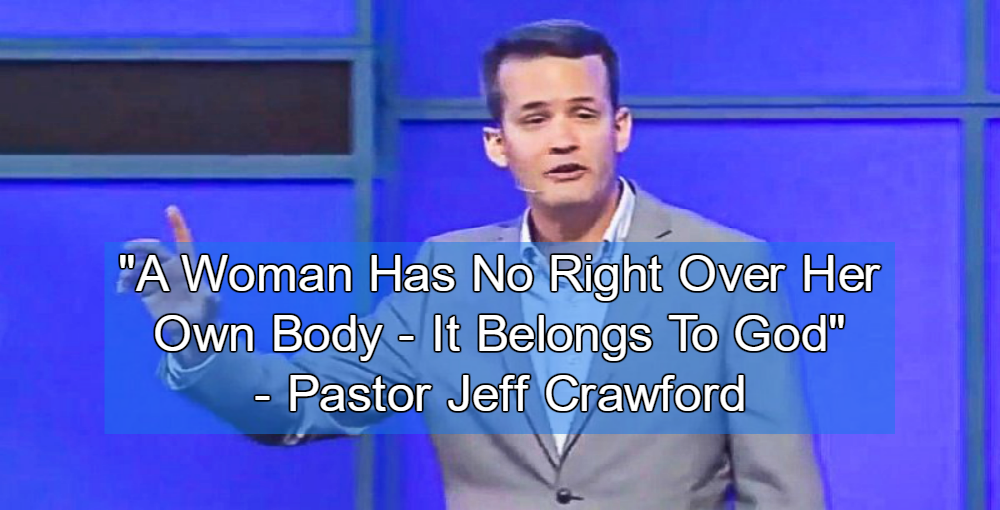 Megachurch Pastor: ‘Woman Has No Right Over Her Own Body – It Belongs To God’

Arguing against a woman’s right to choose an abortion, an Arkansas megachurch pastor claims a woman has no right over her own body, because “it all belongs to God.”

During a Sunday sermon at Cross Church about the dangers of pornography, Pastor Jeff Crawford discussed what he calls “theological dualism” while arguing that a woman has no “right over her own body.”

We have bought into what I want to call this morning theological dualism. This is the idea that you can separate what goes on with our bodies with what goes on soul and spirit…

Our soul and our spirit is uniquely linked to our body. They cannot be separated.

This idea that you hear about in the abortion debate that it’s a woman’s right to choose and she has the right over her own body, no, that’s not true!

Your body’s a temple to the Holy Spirit. And what that means is that your arms and your legs and your head and your eyes — it all belongs to God.

In short, Pastor Crawford argues the Bible does not support the belief that women have a right to control their own bodies.

Pastor Crawford is not alone in using the Bible and conservative Christian principles to denigrate and dismiss the concerns of women.

For example, it is not uncommon for church leaders, almost always men, to justify what amounts to marital rape by invoking “the Biblical concept that sex is both a gift and a duty in marriage” and referencing several Bible quotes.

Indeed, many conservative Christians believe  “it is impossible” for a man to rape his wife, claiming marital rape is acceptable from a Biblical perspective.

Bottom line: It’s 2015, and the sick and twisted Christian patriarchy is alive and well.

R. Kelly - I Believe I Can Fly Lyrics (with birds' gif)

Most cancers are caused by bad luck not genes or l...
Treatment: DRINKING WATER ON EMPTY STOMACH CURES A...
Albert Einstein: Inspirational Quotes
13 Myth and Truth on Beauty

Most cancers are caused by bad luck not genes or l...
Treatment: DRINKING WATER ON EMPTY STOMACH CURES A...
Albert Einstein: Inspirational Quotes
13 Myth and Truth on Beauty