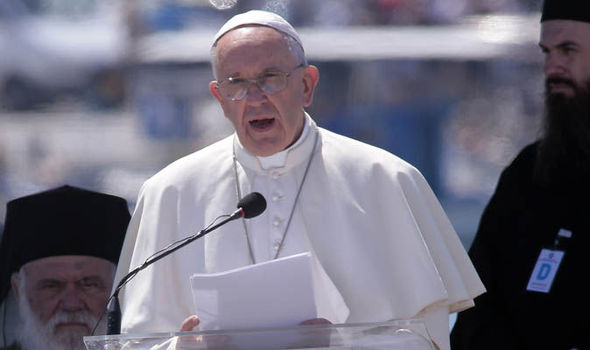 Pope Francis answers reporters questions on board the flight from Krakow, Poland, to Rome, at the end of his 5-day trip to southern Poland, Sunday, July 31, 2016. (Credit: Filippo Monteforte/Pool Photo via AP.

On the papal plane returning from World Youth Day in Krakow, Poland, Pope Francis denied that Islam itself is violent and insisted that the potential for violence lies within every religion, including Catholicism.

ABOARD THE PAPAL PLANE – Pope Francis on Sunday defended his avoidance of the term “Islamic violence” by suggesting the potential for violence lies in every religion, including Catholicism.

“I don’t like to talk about Islamic violence, because every day, when I read the newspaper, I see violence,” Francis said, when asked about why he never speaks of Islamic terrorism or fundamentalism when condemning attacks such as the murder of a French priest last week, who had his throat slit by an Islamic terrorist as he was celebrating Mass.

The pope said that when he reads the newspaper, he reads about an Italian who kills his fiancé or his mother in law.

“They are baptized Catholics. They are violent Catholics,” Francis said, adding that if he speaks of “Islamic violence,” then he has to speak of “Catholic violence” too.

The pope made his remarks in a wide-ranging news conference with journalists travelling with him back to Rome after a five-day visit to Poland in which Francis presided over World Youth Day, a gathering of Catholic youth from all around the world in Krakow, Poland.

The pope said that in every religion there are violent people, “a small group of fundamentalists,” including in Catholicism.

“When fundamentalism goes as far as murdering … you can murder with your tongue and also with the knife,” he said.

“I believe that it’s not fair to identify Islam with violence. It’s not fair and it’s not true,” he continued, adding that he’s had a long conversation with the Grand Imam of Al-Azhar, the Cairo-based Islamic university often described as the Vatican of the Sunni world.

“I know how they think. They look for peace, encounter,” he said.

Francis added that in the case of European youth, many have been left “with no ideals, no work, that end in the hands of drugs and alcohol, and then go over there [didn’t specify] and enlist.”

He did acknowledge that ISIS is an “Islamic state that presents itself as violent.”

“It’s a fundamentalist group that calls itself ISIS, but it can’t be said, it’s not true, and it’s not fair, that Islam is terrorist,” Francis said.

Although clarifying that he didn’t know if he should say it because “it’s dangerous,” the pope then admitted that terrorism grows when “there’s no other option.”

“As long as the god of money is at the center of the global economy and not the human person, man and woman, this is the first terrorism,” he said, defining it as a “terrorism at the bases,” against the whole of humanity.

Francis said the information that has come out regarding the allegations was “confusing,” dating back 40 years.

“Even the police ignored them in the beginning, and later, they were presented to the justice system,” he said.

The pope also said that it’d be wrong for him to pass judgement, either in favor or against the embattled cardinal, before the justice system does.

“It’s true, there’s doubt, but there’s a clear principle in law: in dubio pro reo [meaning when in doubt, for the accused],” Francis told reporters, before adding that “we mustn’t do an anticipated judgement, a media judgement, a rumor [based] judgement.”

Pell, handpicked by the pontiff to lead a reform of the Vatican’s financial systems, is reportedly being investigated by Australian police over alleged sexual misconduct allegations that occurred in the 1970s, 1980s and 1990s, including the period when he was already Archbishop of Melbourne.

As he’s done several times in the past when similar allegations arose, Pell forcefully denied the allegations earlier in the week when the Australian network ABC reported them.

A statement released by his office said that he “denies the allegations absolutely and says that they, and any acceptance of them by the ABC, are nothing more than a scandalous smear campaign which appears to be championed by the ABC. If there was any credibility in any of these claims, the would have been pursued by the Royal Commission by now.”

The Royal Commission is a government-appointed body created to investigate allegations of institutional sexual abuse of minors, going back several decades. Pell has given testimony to it in several opportunities, the last one being earlier this year, when he was questioned through video link from Australia after his doctors advised him against making the trip back home.

The complaints revealed by ABC include allegations by two men now in their forties from Pell’s home town of Ballarat, who say he touched them inappropriately in the summer of 1978-79 when he was playing a throwing game with them in a town pool.

In another complaint, Torquay businessman Les Tyack gave a statement to the Royal Commission last year relating to an incident at the Torquay Surf Life Saving Club in the summer of 1986-87.

He said he walked into the club change rooms to discover a naked Pell behaving in a manner that caused him concern in front of three boys he estimated to be aged between 8 and 10 years old.

A further complaint that ABC reported relates to the period in the 1990s when Pell was setting up the Melbourne Response – the Australian Catholic Church’s first attempt to address child abuse. It involves two teenage choirboys who asked their parents to leave the choir soon after the alleged abuse had occurred.

“The cardinal’s conduct has been repeatedly scrutinized over many years, including before the Royal Commission into Institutional Responses to Child Sexual Abuse, the Victorian Parliamentary Inquiry into the Handling of Child Abuse by Religious and Other Organizations and, according to leaked reports, by Victorian Police’s SANO Taskforce,” the statement released by Pell’s office said.

“The cardinal does not wish to cause any distress to any victim of abuse. However, claims that he has sexually abused anyone, in any place, at any time in his life are totally untrue and completely wrong,” the statement said.

Regarding Venezuela, Francis was questioned by the Spanish speaking journalists, who wanted to know about the possibility of the Vatican joining a dialogue between the government of President Nicolas Maduro and his political opposition.

Francis said that he believes at least one of the parties had requested for the Vatican to aid in the mediation, adding, however, that he couldn’t confirm this.

The opposition has, in fact, said that unless a papal representative joins the dialogue table, they won’t participate.

The situation in Venezuela is becoming dire, with people dying in the hospital for lack of medicine and people waiting in line for 16 hours to buy bread. Across the country, citizens are looting supermarkets and mobs are attacking trucks transporting goods out of hunger.

Regarding Turkey, the pope was asked about his silence over President Recep Tayyip Erdoğan’s reaction to the failed military coup two weeks ago.

Francis said that even though he’s been outspoken whenever there was something he “didn’t like about Turkey” with the consequences “known to all,” he currently doesn’t feel he has enough information, despite the help from the Vatican’s Secretary of State and political consultants, to voice an opinion.

When he speaks about having been vocal, he was likely referring to using the word “genocide” to talk about the early 20th century mass killing of Armenians by Ottoman Turks.

When he used the word last year during a Mass for the 100th anniversary of the genocide, for instance, Erdogan called back his ambassador to the Vatican, and only sent him back eleven months later.

It Must Have Been Love - Roxette ( Theme from Pretty Woman)