Bath is a city in Somerset, South West England. The city became a spa when the Romans built baths and a temple in the valley of the River Avon.

The Roman Baths and museum is one of the finest historic sites in the English City of Bath, Northern Europe, and one of the most popular tourist attractions in the UK.

This shows the history of the Roman occupation of this city and it is a beautiful place.

The open air bath at Bath. It was heated by a hot water spring.

The Temple from the Roman Baths was one of only two classic temples in all of Roman Britain. The temple pediment has amazingly survived and been re-erected in the Museum.

The Roman Baths themselves are below the modern street level. There are four main features: the Sacred Spring, the Roman Temple, the Roman Bath House and the Museum, holding finds from Roman Bath. The buildings above street level date from the 19th century. 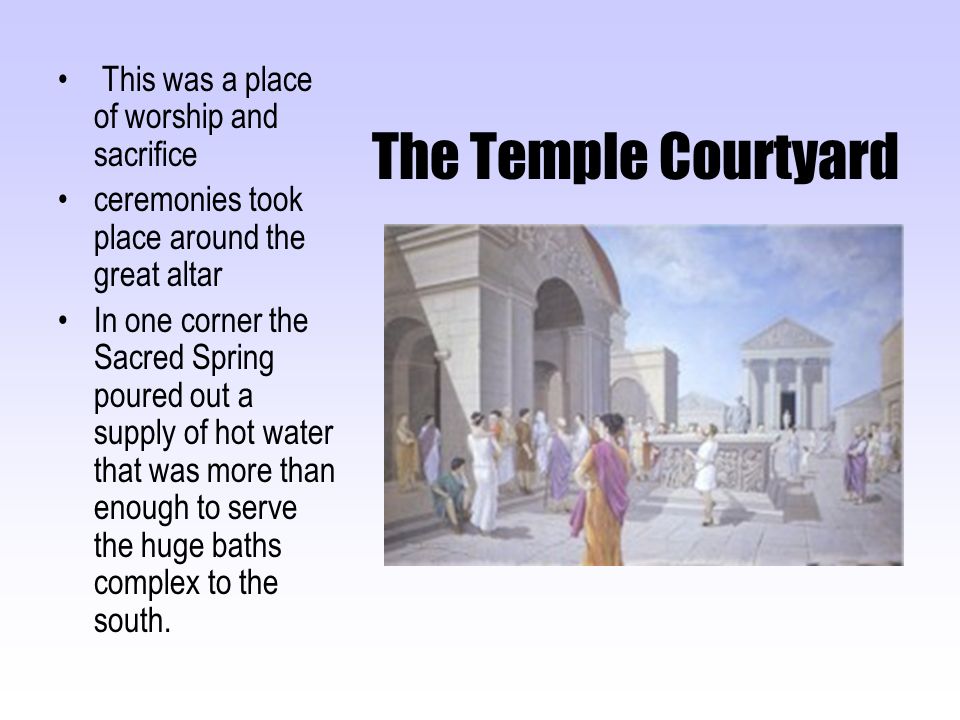 The Baths are a major tourist attraction and, together with the Grand Pump Room, receive more than one million visitors a year. It was featured on the 2005 TV program Seven Natural Wonders as one of the wonders of the West Country. 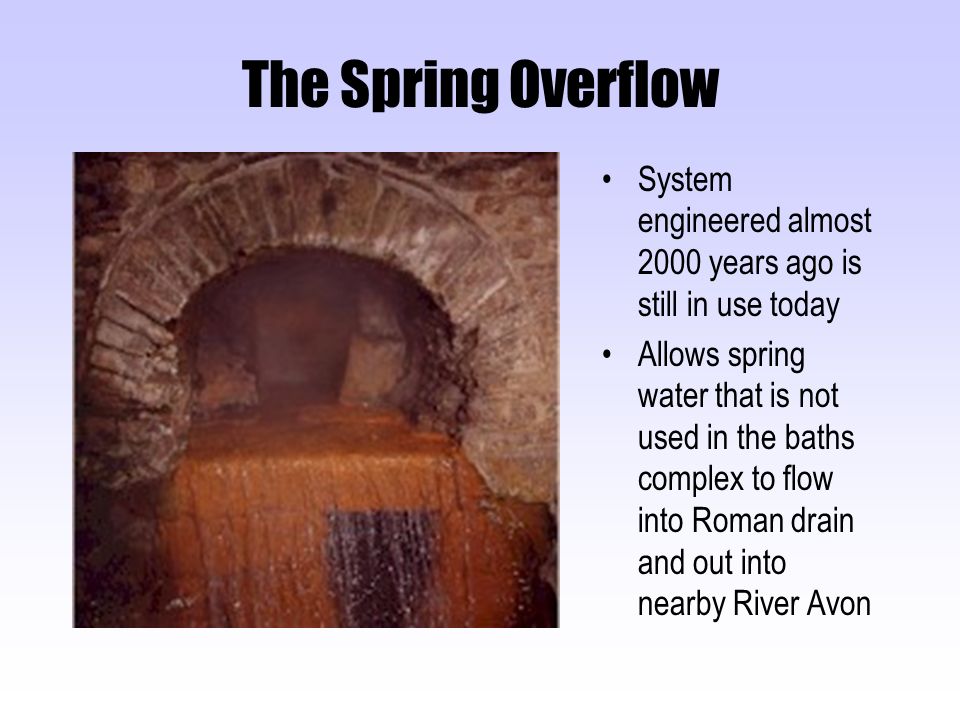 BATH, MAINSTAY OF A ROMAN CULTURE

Public baths were a feature of ancient Greek towns but were usually limited to a series of hip-baths. The Romans expanded the idea to incorporate a wide array of facilities and baths became common in even the smaller towns of the Roman world, where they were often located near the forum.

In addition to public baths, wealthy citizens often had their own private baths constructed as a part of their villa and baths were even constructed for the legions of the Roman army when on campaign. However, it was in the large cities that these complexes (balnea or thermae) took on monumental proportions with vast colonnades and wide-spanning arches and domes. Baths were built using millions of fireproof terracotta bricks and the finished buildings were usually sumptuous affairs with fine mosaic floors, marble-covered walls, and decorative statues.

The baths were a luxurious place to spend the afternoon. They were lavishly decorated, the walls, floors and ceilings covered in beautiful colored marble, mirrors and mosaics accented with bronze or silver faucets. The hot air circulating throughout the walls from the hypocaust would have made the walls pleasantly warm to the touch and the air was probably warm and well circulated. High ceilings and large windows would have given the baths a light and spacious feel.

Gilt bronze head from the cult statue of Sulis Minerva from the Temple at Bath, found in Stall Street in 1727 and now displayed at the Roman Baths (Bath).

As the Romans advanced west in England, building the Fosse Way as they went, they crossed the River Avon. Near here they found a hot water spring. It brought over one million litres of hot water to the surface every day at a temperature of about 48 degrees centigrade. They built a reservoir to control the water flow, baths and a temple. A town, Bath, quickly grew around this complex.

Many Romans viewed the springs as sacred and threw valuable items into the springs to please the gods. An altar was also built at Bath so that priests could sacrifice animals to the gods.

The waters at Bath gained a reputation as being able to cure all ills. As a result, may travelled to Bath from all over the Roman Empire to take to the waters there. 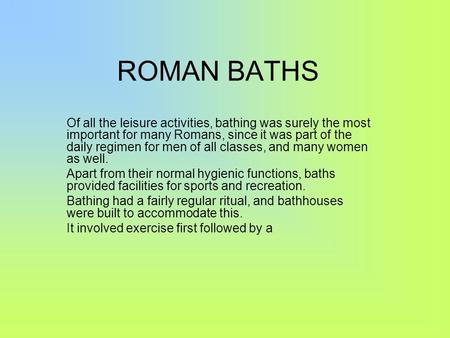 Every town had its own bath complex (like a large swimming pool). There were 170 baths in Rome during the reign of Augustus and by 300 A.D that number had increased to over 900 baths.

The Romans loved washing and bathing and rather it being done in private, the Romans built magnificent public bath houses in towns across their empire. Rich villa owners would had their own baths in their homes.

You can see remains of a Roman bath in the city of Bath, in Somerset. 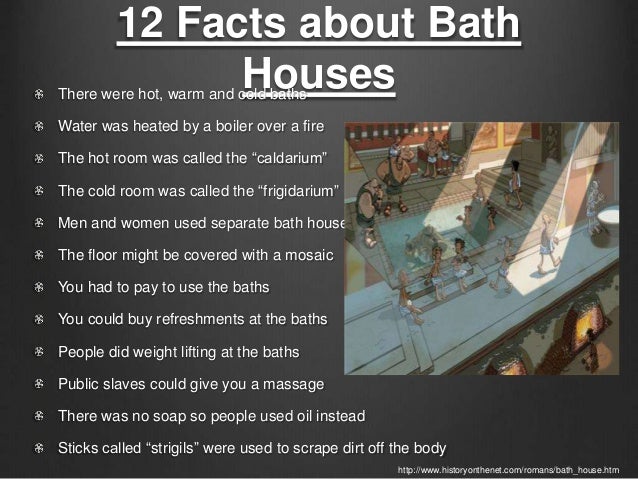 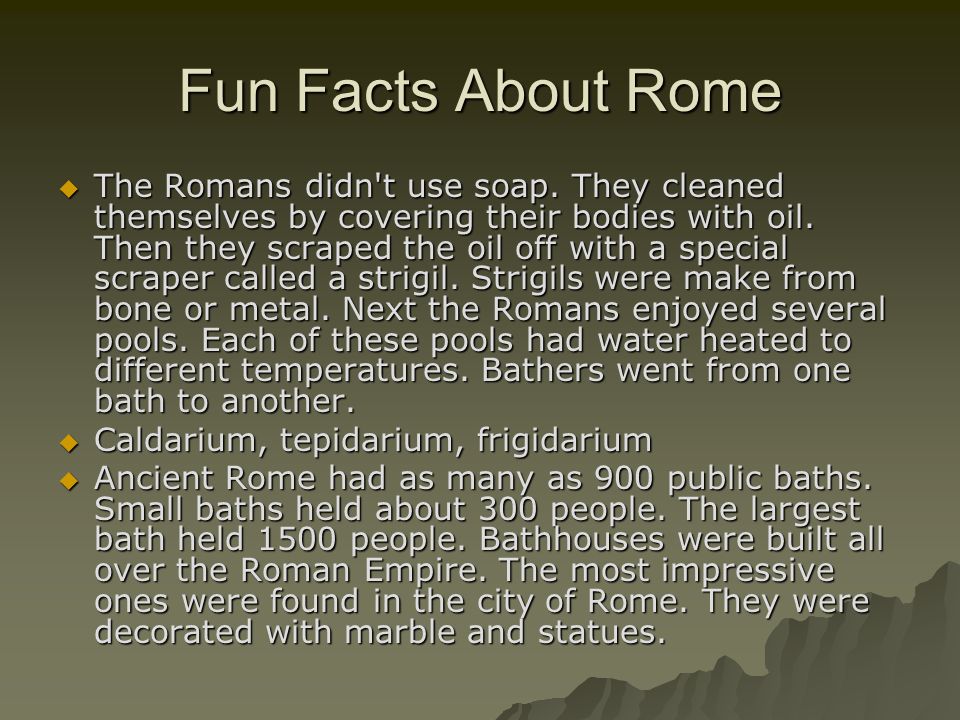 The layout of a Roman Bath

Baths for bathing and relaxing were a common feature of Roman cities throughout the empire. The often huge bath complexes included a wide diversity of rooms offering different temperatures and facilities such as swimming pools and places to read, relax, and socialise. Roman baths, with their need for large open spaces, were also important drivers in the evolution of architecture offering the first dome structures in Classical architecture.

Romans typically frequented the baths at around 2 in the afternoon (during the Roman 8th hour) after the work day ended at about noon and before dinner which was taken in late afternoon or early evening. Baths were loud and crowded and were accessible to all, both rich and poor. In the reign of Diocletian, for example, the entrance fee was a mere two denarii – the smallest denomination of bronze coinage. Sometimes, on occasions such as public holidays, the baths were even free to enter.

A public bath was built around three principal rooms: 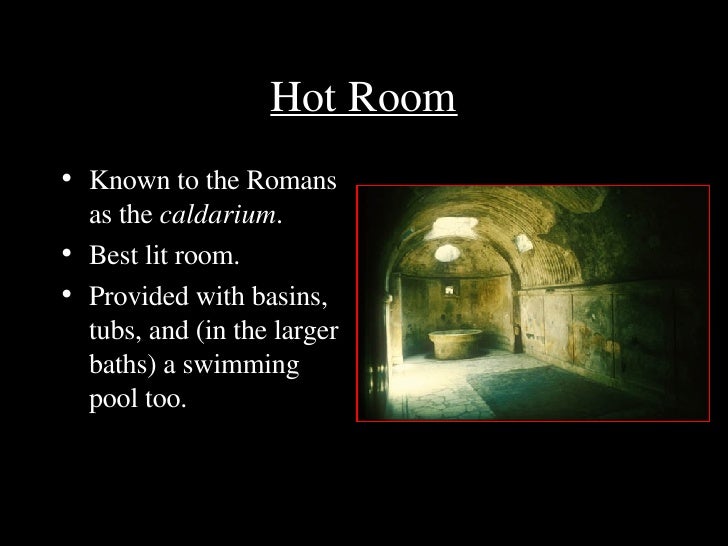 Frigidarium cold room of the forum baths pompeii. This idea came from the Turks and Arabs after they started to overrun the eastern roman empire. 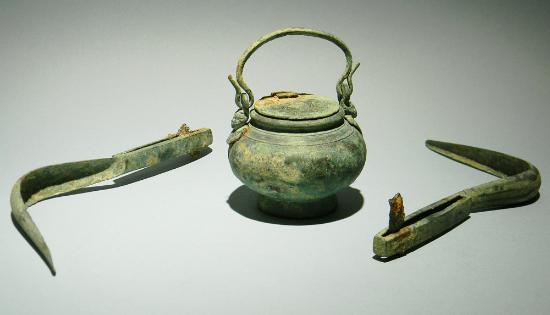 A strigil was a small, curved, metal tool used to scrape dirt and sweat from the body. First perfumed oil was applied to the skin, and then it would be scraped off, along with the dirt.

Typical features (listed in the probable order bathers went through) were: 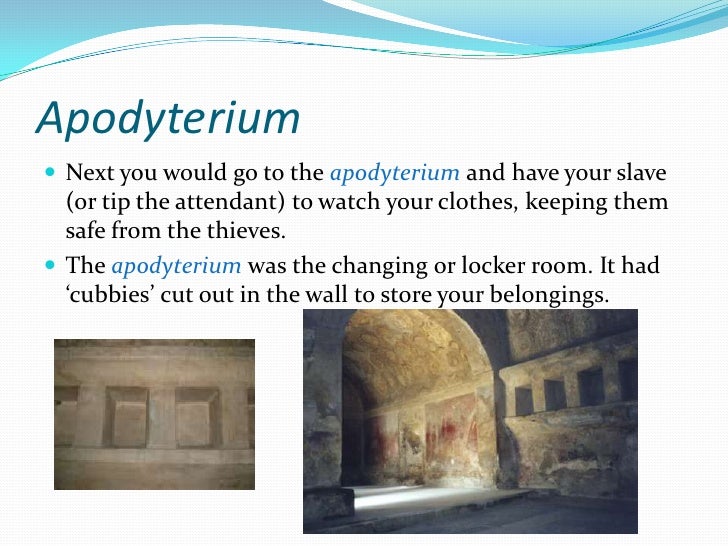 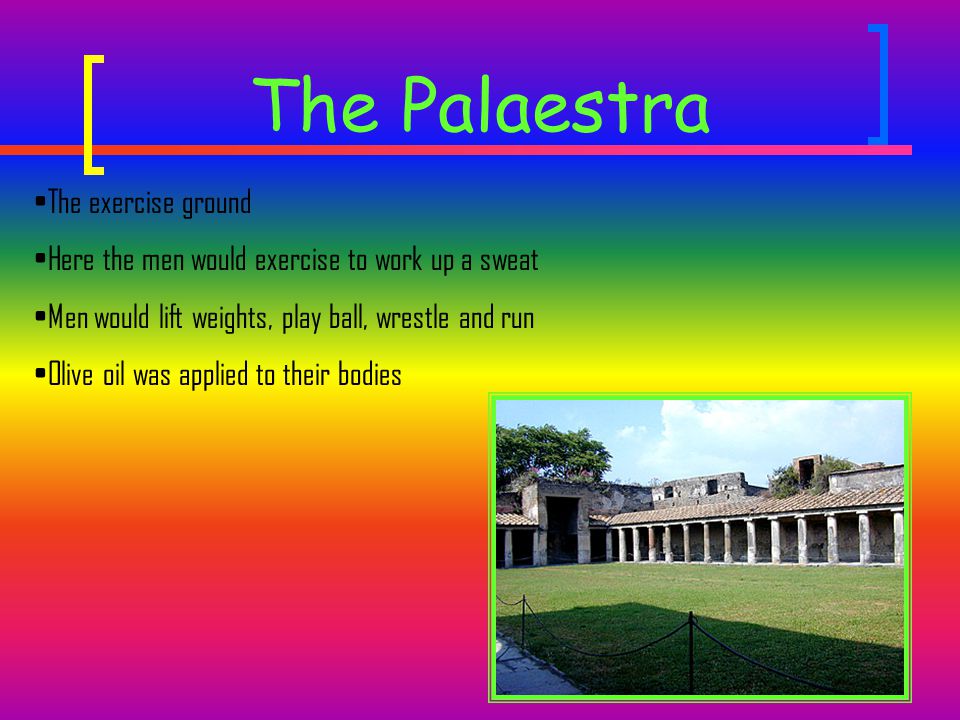 For Romans, bathing was not a private activity, and it wasn’t just about keeping clean. They were lavishly decorated, the walls, floors and ceilings covered in beautiful colored marble, mirrors and mosaics accented with bronze or silver faucets. The hot air circulating throughout the walls from the hypocaust would have made the walls pleasantly warm to the touch and the air was probably warm and well circulated. High ceilings and large windows would have given the baths a light and spacious feel. Hungry patrons could pickup a snack at any of the stands within and around the baths. They could be massaged by professional masseurs and sit and sweat in a sauna-like hot room, the laconicum. Since the bathing ritual took a long time, going from room to room, the baths were a place to socialize and meet friends to catch up on the latest gossip or discuss politics.

The Romans tended to follow a set routine when they went to a bath house.

Bath houses were designed to be pleasant places to spend time. They had mosaics, paintings, high ceilings and they allowed in a lot of natural light.

How were the baths heated?

The first baths seem to have lacked a high degree of planning and were often unsightly assemblages of diverse structures. However, by the 1st century CE the baths became beautifully symmetrical and harmonious structures, often set in gardens and parks. Early baths were heated using braziers, but from the 1st century BCE more sophisticated heating systems were used such as under-floor (hypocaust) heating fuelled by wood-burning furnaces (prafurniae). This was not a new idea as Greek baths also employed such a system but, as was typical of the Romans, they took an idea and improved upon it for maximum efficiency. The huge fires from the furnaces sent warm air under the raised floor (suspensurae) which stood on narrow pillars (pilae) of solid stone, hollow cylinders, or polygonal or circular bricks. The floors were paved over with 60 cm square tiles (bipedales) which were then covered in decorative mosaics.

The Roman hypocaust was a heating system designed by the Romans. The floors of the bath house rooms were built on pillars, leaving a space below the floor and inside the walls. This space was filled with hot air from a furnace (called a praefurnium) and heated the room. The temperature could be increased by adding more fuel to the fire. In the hottest rooms of a Roman bath house, bathers had to wear special sandals to protect their feet from the hot floor-tiles. 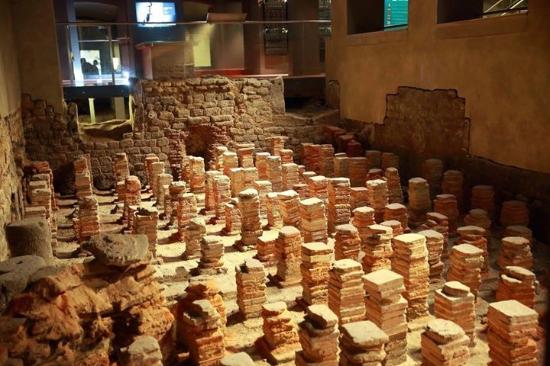 Hypocausts beneath the floor of the caldarium at Bath, England. The hypocaust was a furnace which efficiently heated the baths from under the floor.

Roman bath houses also contained public toilets. Marble seats were built over a continuously flowing water supply which would act as a flush.

Bathing was very important to the Ancient Romans as it served many functions.

Baths were loud and crowded. One description by Seneca, a philosopher who lived in an apartment above a public bath, describes “the assortment of sounds which are enough to make me hate my very powers of hearing” (Paoili 225). Seneca bitterly describes the sounds of straining weightlifters, pummeling masseuses, shouting scorekeepers, splashing swimmers, singing bathers, and the advertising cries of the armpit hair-plucker, and the wails of his customers. In spite of the noise and activity, the baths were a luxurious place to spend the afternoon.

“We quickly undressed, went into the hot baths and after working up a sweat, passed on to the cold bath. There we found Trimalchio again. His skin was glistening all over with perfumed oil. He was being rubbed down, not with ordinary linen, but with cloths of the purest and softest wool. he was then wrapped in a blazing scarlet robe, hoisted into a litter, and trundled off.” Petronius

However not everyone was overjoyed by them:

Bob Marley: A Prophet of His Times and a Revolutionary

NATION: Kingdom Of Saudi Arabia Rulers And Their Human Rights

Why does the Queen Elizabeth II have TWO birthday...
Singing Cat – Bob Seger – Old Time Roc...
ISRAEL, JERUSALEM: CASE OF VIRGINAL CONCEPTION BAF...
How to Ignore Things To Have a Great Paths To Inne...

Why does the Queen Elizabeth II have TWO birthday...
Singing Cat – Bob Seger – Old Time Roc...
ISRAEL, JERUSALEM: CASE OF VIRGINAL CONCEPTION BAF...
How to Ignore Things To Have a Great Paths To Inne...