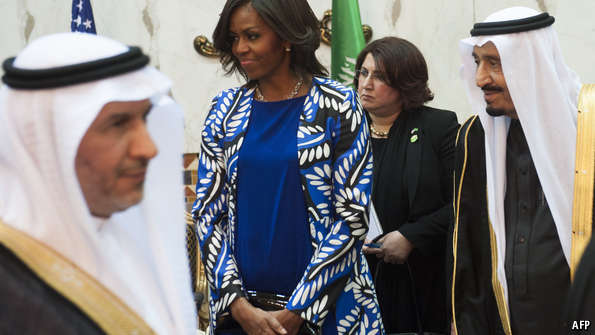 COMMENTATORS, mainly non-Saudis, made a hullabaloo when Michelle Obama, America’s first lady, turned up in Saudi Arabia on January 27th in colourful, loose-fitting clothing and no headscarf. The oil-rich kingdom is known for its women being swathed in long, black cloaks known as abayas, usually paired with the hijab (headscarf) or niqab(which leaves a slit for the eyes), or a burqa (which covers the body from head to toe, with a mesh for the eyes). So what do women, Saudi and foreign, actually have to wear in Saudi Arabia?

The key to understanding Saudi customs is the country’s history. When the modern nation was founded in 1932, it was based on an 18th-century pact between the ruling Al Saud monarchy and a devout bunch of clerics who followed a fiery version of Islam, dubbed Wahhabism (after its founder Muhammad Ibn Abd al-Wahhab). Ever since, Saudi Arabia’s laws have been based on this creed’s strict version of sharia, or Islamic law, which in reality incorporates many desert traditions that have been cloaked in Islam. The full covering for women is considered to be one of these customs. But today it is enforced by the religious police and zealous volunteers.

While all versions of Islam suggest a woman should dress modestly, often covering her hair and body, Saudi Arabia is one of the only Muslim-majority countries that legally imposes a dress code (Iran is another). Women, foreign and local, must wear an abaya (a few get away with long coats) in public places. Muslim—often equated with Saudi—women are said to have to wear a headscarf; foreigners needn’t. The face need not be covered, much to the chagrin of some hardliners. There are margins and uncertainties, too. The western coastal of Jeddah is far more relaxed than Riyadh, with abayas often brightly coloured or worn open to expose the clothing beneath. At home with relatives, in compounds and all-female settings, women can shed their outer layers. At some posh private Red Sea resorts, they go in bikinis. While many women head to aeroplane lavatories just before landing, not being fully covered is tolerated in the airport.

The strict dress code doesn’t mean there is no room for personal expression or fashion.Abayas come in different cuts, colours, styles and fabrics, from plain black to ones with cartoon characters on the back, and from cotton daywear to lacy or frilly ones fit for an evening out. Most women have a wardrobe of options; abaya shops abound. Moreover, women can wear whatever shoes they like, from trainers to Jimmy Choos. The accessory business is booming in Saudi Arabia as bags, sunglasses and jewellery become the markers of taste. A number of women are heavily made up. Some suggest that defeats the point. As with other rules in the kingdom, many young people find ways around them. But asurvey in January 2014 found that conservative attitudes remain pervasive among the population: despite half the sample saying women should be free to choose what to wear, two-thirds reckoned women should wear the niqab and another 11% the burqa—stricter forms of dress than the one currently enforced. “My Heart Will Go On” by Celine Dion ...
Health: Bullies ‘set fire’ to autistic...
Women of War: Modern Women Slavery and Humility
This I Promise You (‘N SYNC LYRICS)

PEOPLE: Fact About The Croatian's President In A Sizzling Hot Bikini Photos