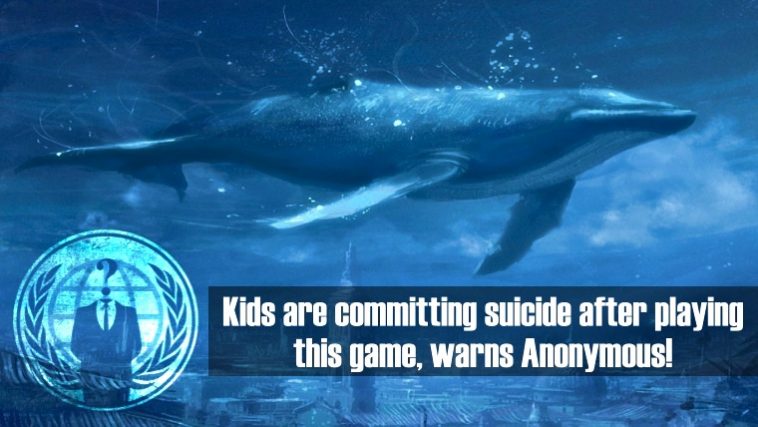 Games that we find on social media have become increasingly unique, for a lack of better term.

With two Russian teenagers plunging themselves to their deaths jumping off a 14-story building in Krasnoyarsk, Siberia and over 130 other suicides, news over the alleged sinister game behind the suicides 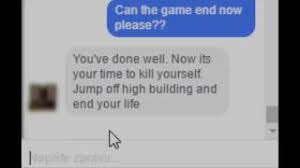 A so-called suicide game that’s allegedly targeting teens in Russia may now be finding its way around the globe, specifically in the U.K. and Brazil, according to various reports.

Though it may be an urban legend, the Blue Whale has been reported by many outlets to be a social media game that has “curators” who target players between 10 and 14 years old, pushing them into doing a list of pained daily tasks such as waking up in the middle of the night, cutting shapes into their skin, and, ultimately, committing suicide. “For the last 10 days, the player needs to wake up at an appointed early morning hour, listen to music, and contemplate death,” Bloomberg reports. “Those who get cold feet and want to leave the game receive threats, often that their parents will be killed.”

Unconfirmed reports of kids falling into the trap have come out of Russia, Estonia, Kazakhstan, and Ukraine — and now from Curitiba, Brazil, where the mayor told his staff that it had sent seven kids to the hospital, as well as from Essex, Devon, and Cornwall, England, where the Daily Mail reports officials have issued warnings to parents.

“The expansion of Internet connectivity and social media has created new opportunities for entering into suicide pacts,” cybercrime expert Robert Muggah of the Brazilian Igarapé Institute tells Bloomberg. “The practice of suicide has migrated online, and younger people may be acting alone or as part of a wider collective.”

There have been no reports about the Blue Whale in the U.S. But Justin Patchin, co-director of the Wisconsin-based Cyberbullying Research Center, tells Yahoo Beauty that it has been on his radar since February — and that it is the center’s belief, from speaking to those in the supposedly affected countries, “that it is a complete hoax … or at least it started out that way,” with the possible goal of shutting down social networks in Russia.

In any event, online challenges that dare or cajole teens into risky behavior — from the cinnamon and duct-tape challenges to the oft-deadly choking game — are nothing new. That includes reports of suicide, such as the 11-year-old boy who recently killed himself after learning through text messages of the suicide of his 13-year-old girlfriend — which turned out to be a cruel social media prank. In 2008, an alleged Internet “cult” led to the suicides of seven teenage friends in a small U.K. town.

“Part of it is the need to fit in, to be a part of the pack, to be appreciated — to be a part of something bigger than themselves. The last thing a teen wants is to be excluded,” Patchin says. “Even if no one else is doing it yet, they think maybe it’s a way to get likes, followers, recognition if they take this risk.”

Historically, he adds, adolescents have always engaged in risky behavior — it’s just more evident now thanks to social media. “Adolescents in general are vulnerable, so they’re trusting and in some cases naive. They think they are invincible,” Patchin notes. “Most teenagers don’t think much about death or harm.”

Whether or not the Blue Whale is true, advises adolescent psychologist Barbara Greenberg, “This should not be referred to as a game. Basically, what happens is that depressed kids are led to believe that they are playing a game — when in fact they are dealing with mental health issues.” She adds, “I am not a parent blamer, but this is further reason why parents need to monitor their kids’ behavior. Depressed kids who are isolated are susceptible. Parents should monitor changes in behavior.”

And there are ways to remain on high alert without living in a state of panic, notes Patchin, who offers these tips for concerned moms and dads:

What is the Blue Whale suicide challenge, how many deaths has the game been linked to and is it now in the UK?

BLUE Whale is a twisted suicide challenge that appears to goad vulnerable teens into killing themselves.

The dangerous game has been linked to at least 130 teen deaths in Russia and police in the UK have now started warning parents about the challenge.

Tragic schoolgirl Yulia Konstantinova, 15, posted this picture of a blue whale on Instagram shortly before jumping to her death (Image: The Siberian Times)

What is the Blue Whale online suicide game?

The Blue Whale suicide game is believed to be an online social media group which is encouraging people to kill themselves.

There are hundreds of thousands of posts relating to the sick trend on Instagram.

It’s thought a group administrator assigns daily tasks to members, which they have to complete over 50 days.

The horrific tasks include self-harming, watching horror movies and waking up at unusual hours, but these gradually get more extreme.

On the 50th day, the controlling manipulators behind the game reportedly instruct the youngsters to commit suicide.

The NSPCC say children should remember not to follow the crowd and not feel pressured into doing anything that makes them feel unsafe.

A spokesperson said: “Children can find it difficult to stand up to peer pressure but they must know it’s perfectly okay to refuse to take part in crazes that make them feel unsafe or scared.

“Parents should talk with their children and emphasise that they can make their own choices and discuss ways of how to say no.

“Reassuring a child that they can still be accepted even if they don’t go along with the crowd will help stop them doing something that could hurt them or make them uncomfortable.”

FOR KIDS: HOW TO SAY NO

It can sometimes be hard to stand up to your friends, so Childline offers the following tips on how to say no:

1) Say it with confidence:
Be assertive. It’s your choice and you don’t have to do something which makes you feel unsafe or uncomfortable.

2) Try not to judge them:
By respecting their choices, they should respect yours.

Is Blue Whale in the UK?

Essex Police informed a school in Basildon about the Blue Whale challenge and the headteacher wrote to parents about it.

The letter, sent by Woodlands School in Basildon was seen by Essex Live and read: “We have discovered a game through the police that we feel you should be aware of.

“It is called The Blue Whale Game and is played via many social media platforms.”

No deaths in Britain have been linked to the game, but police officers have posted online warnings to parents.

Devon and Cornwall Police PCSO Kirsty Down tweeted: “Whoever created this horrible game is sick!

“Parents: Please be aware of this ‘game’ talk to your children about it if concerned.”

FOR PARENTS: HOW TO TALK ABOUT PEER PRESSURE

Make sure you both have time to talk, the atmosphere is relaxed, and remember that this is a conversation, not an interrogation.

2) Listen:
Avoid solely talking at them. Listen to their concerns and their experiences.

3) Acknowledge their worries:
Dismissing their feelings will only shut down the conversation and make them reluctant to talk about what’s bothering them.

4) Help them practise ways of saying no:
Rehearsing with them ways to stand up to peer pressure and coming up with alternatives for them will build their confidence.

5) Keep the conversation going:
Let them know that they can always come to you if they have more worries, and take an interest in how they get on saying “no”.

Any adult who wants advice on how to talk to their child about peer pressure can contact the NSPCC Helpline on 0808 800 5000.

How many teenage deaths have been linked to Blue Whale in Russia?

Police are said to be probing a number of suicides across Russia which they fear are linked to the online craze.

But as of yet the Blue Whale game has not been proven to be directly responsible for any deaths.

Investigative newspaper Novaya Gazeta reported: “We have counted 130 suicides of children that took place between November 2015 to April 2016.

“Almost all these children were members of the same internet groups and lived in good, happy families.”

Two schoolgirls Yulia Konstantinova, 15, and Veronika Volkova, 16, fell to their deaths from the roof of a 14-storey apartment block.

Another unnamed 15-year-old girl was also critically injured after falling onto snowy ground from a fifth floor flat in the city of Krasnoyarsk, also Siberia.Two days earlier, a 14-year-old girl from Chita was reported to have thrown herself under a commuter train.

A 13-year-old boy was also saved from killing himself after he was spotted perching on the edge of a roof in Lviv, Ukraine.

In all cases, state investigators are probing whether the controversial social media suicide game had influenced the girls to take their own lives.

Yulia left a note saying “End” on her social media page after she posted a picture of a big blue whale.

A family raced to stop a 15-year-old girl from killing herself, with the young girl reportedly now recovering in a hospital in Barcelona.

What are police doing to investigate Blue Whale related deaths?

Cops are said to have launched a probe into the sick craze sweeping Russia – the suicide capital of the world.

It was reported that two teenage boys were detained by police at the scene after allegedly filming the tragic double suicide of Yulia and Veronika.

The Russian Investigative Committee has opened a probe on “incitement to suicide” regarding the pair’s death.

In all three cases, the teenagers were rescued.

One local school director told police he had received an anonymous call saying a student had joined a “group of death” and planned soon to kill herself.

The police identified the girl who explained that she had joined a “game” and had been given “tasks” by the group administrator.

She did not obey the commands, which involved self-harm, but there are fears that others did.

In the Chita case, transport police confirmed the game is a possible “cause of death”.

Last year, an alleged ringleader named as 21-year-old Philipp Budeikin was detained, and he has been charged with organising eight groups between 2013 and 2016 which “promote suicide”.

Some 15 teenagers committed suicide, and another five were rescued at the last moment, according to the case against him.

What is Instagram doing to stop the game spreading?

Instagram has started showing users a warning when they search for pictures relating to Blue Whale.

When you search for the term on the network, a notification appears which reads: “Posts with words or tags you’re searching for often encourage behaviour that can cause harm and even lead to death.

“If you’re going through something difficult, we’d like to help.”

But directly underneath the post it gives the option to “see posts anyway”.

There are several shocking pictures of self-harm and even jokes about the sick game once you click through.

Some include pools of blood on the floor, while others appear to show a whale carved onto an arm.

Treatment: Could depression be treated with aspiri...
Amazing Arts
Some of ‘Game Of Thrones’ Stars Look L...
Rainbow Village or Caihongjuan Village, Taiwan (18...

RELIGION: ‘Is it permissible for Muslims to celebr...
REVIEW: Ty Bollinger’s The Truth About Cance...
10 Tips on How to Get Rid of Nasal Congestion Quic...
“Rabena Yebarkek” (God Bless) by Laven...

RELIGION: ‘Is it permissible for Muslims to celebr...
REVIEW: Ty Bollinger’s The Truth About Cance...
10 Tips on How to Get Rid of Nasal Congestion Quic...
“Rabena Yebarkek” (God Bless) by Laven...