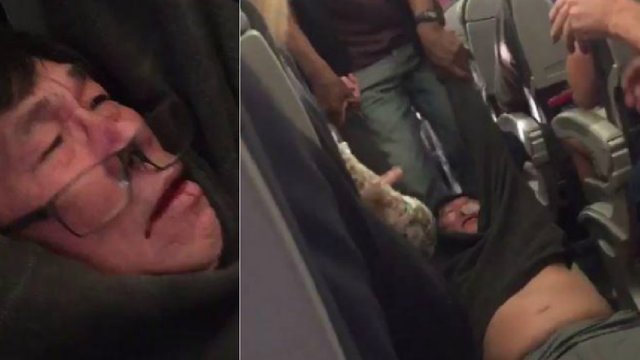 United’s motto is “Fly the friendly skies.”.. How could this motto justify this sad incident?

An airport cop who body-slammed a United passenger and dragged him off an overbooked flight was put on leave today – as his bosses condemned his actions amid mounting outrage over video of the incident.

The Chicago Department of Aviation said it ‘obviously’ did not condone the behavior of the security officer who was filmed slamming the man into an arm rest, knocking him unconscious and dragging him away by his arms as he bled from the mouth at O’Hare.

United is facing growing anger after they selected the 69-year-old man – who claimed to be a doctor – to be bumped from the overbooked flight to Louisville to make room for its staff on Sunday night.

The airline’s CEO apologized today even as new video emerged of the man, who had refused to leave the flight, bleeding heavily from the mouth and mumbling about suicide in the aftermath of his brutal treatment.

In the clip, the dazed man chants ‘just kill me, just kill me’ as blood pours from his mouth.

It seems to have been filmed after another clip that shows the victim somehow broke free from the airport cops and ran back onto the plane chanting ‘I need to go home, I need to go home.’ Beaten and bloodied: The unnamed passenger is pictured bleeding from the mouth after he was body slammed by cops and dragged off the overbooked United flight at Chicago O’Hare

In his apology, United CEO Oscar Munoz said today: ‘This is an upsetting event to all of us here at United. I apologize for having to re-accommodate these customers.

‘Our team is moving with a sense of urgency to work with the authorities and conduct our own detailed review of what happened. We are also reaching out to this passenger to talk directly to him and further address and resolve this situation.’

The aviation department released a statement to the Chicago Sun-Times, which read: ‘The incident on United flight 3411 was not in accordance with our standard operating procedure and the actions of the aviation security officer are obviously not condoned by the Department.

‘That officer has been placed on leave effective today pending a thorough review of the situation.’

Aviation department security officers are responsible for policing inside the security cordon at O’Hare.

The Chicago Police department, which operates separately, had earlier risked controversy by claiming that the man ‘fell’ into the armrest.

Their statement released on Sunday night said:  ‘Aviation Officers arrived on scene attempted to carry the individual off of the flight when he fell. His head subsequently struck an armrest causing injuries to his face.’

It claimed that the man had begun yelling his displeasure at being selected to leave and was taken to hospital with non life-threatening injuries.

Today the department retreated from the statement, referring all enquiries to the Aviation Department.

The still unidentified victim – who claimed to be a doctor and said he needed to see patients the next morning – was one of four passengers selected by United to leave the 5.40pm flight from O’Hare to Louisville, Kentucky.

One passenger also told the Washington Post the man claimed as he was being dragged off the plane he was chosen because he was Chinese.

‘He said, more or less, ‘I’m being selected because I’m Chinese”,’ the passenger told the Post.

The same passenger went on to tell the newspaper a United official walked onto the plane during the incident and said the plane would not be taking off until four passengers disembarked so the employees could fit on.

He said the official announced: ‘We have United employees that need to fly to Louisville tonight. … This flight’s not leaving until four people get off.’

‘That rubbed some people the wrong way,’ Tyler Bridges said, recounting the comment.

United had unsuccessfully appealed for volunteers who were willing to give up their seats for $800, stay in a hotel and fly the next day. The passengers were removed so airline staff could get to Louisville to man a flight the following day.

When the appeal failed, United staff selected four passengers by computer. A manager told passengers that the unlucky four were chosen at random – although many airlines automatically choose passengers with the lowest fares and who were last to check-in to offload.

One couple and another passenger left the plane peacefully, but the Asian man refused.

That’s when airport law enforcement was called to remove him man by force.

Passengers screamed ‘my god what are you doing’ and ‘this is wrong’ as the man was yanked from his seat. He appeared to go limp after being slammed against a headrest and one passenger said he was ‘knocked out’.

Jayse Anspach told CNN that the man and his wife had initially volunteered when flight attendants called for four people to take a later flight so airline staff could take their seats.

But the 69-year-old had rescinded his offer when he learned that the next flight available was not until 2.30pm on Monday.

When no-one else came forward, the air crew came aboard with four slips of paper with the names and seat numbers of passengers and began informing them they had been chosen to leave the plane.

‘They approached his doctor and told him to get off the plane,’ he said. ‘He refused because he had work the next day. He’s a medical doctor. He was very emphatic, “I can’t be late, I’m a doctor, I’ve got to be there tomorrow.’

Anspach, who said that the whole situation had put him off flying with United in the future, said that he saw the passenger hit his face when staff dragged him off.

‘It was ten minutes later and he came running back on,’ he said. ‘He runs to the back, his face was bloody, and clung onto the post at the back, saying “I wanna go home, I need to go home.”’

‘It wasn’t until 35 to 45 seconds later that the authorities followed him. So I don’t know what happened in the jet way but he managed to escape from them.’

The man was then taken off for a second time, this time on a stretcher, he added.

Audra Bridges, one passenger who filmed the man’s removal, described what happened on the flight to the Courier-Journal.

She said that passengers were told at the gate that the flight was overbooked and staff appealed for one volunteer to accept $400 and a hotel stay to take a flight at 3pm the next day.

All the remaining passengers were then allowed to board the flight – only to be told that another four people would have to give up their seats. Footage of the Vietnamese-American being hauled off the overbooked flight at Chicago’s O’Hare International Airport on Sunday caused outrage on Monday.

Dr Dao was heard in videos captured of his shocking eviction saying he needed to get home to Louisville so he could see patients.

DailyMail.com can reveal Dr Dao is a father of five and a grandfather, who specializes in internal medicine. Four of his five children are doctors.

His wife Teresa, 69, is a pediatrican who trained at Ho Chi Minh University in Saigon and also practices in Elizabethtown, Kentucky – about 40 miles south of Louisville.

Their other daughter, Crystal – Christine’s twin – is a married mother in Barrington, Illinois.

It was also revealed he had previously been given a suspended jail sentence for illegally obtaining and trafficking controlled substances by fraud and deceit.

He was also found to have in engaged in sex with a male patient and then supplied him with drugs, including Oxycontin, in exchange for sexual favors.

His license was suspended in 2003, and it was then partially re-instated in 2015.

Dr Dao is also a keen poker player, and has competed in World Series of Poker events in the past.

He joined the circuit in 2006, and had his best result when he finished second in a tournament in 2009. 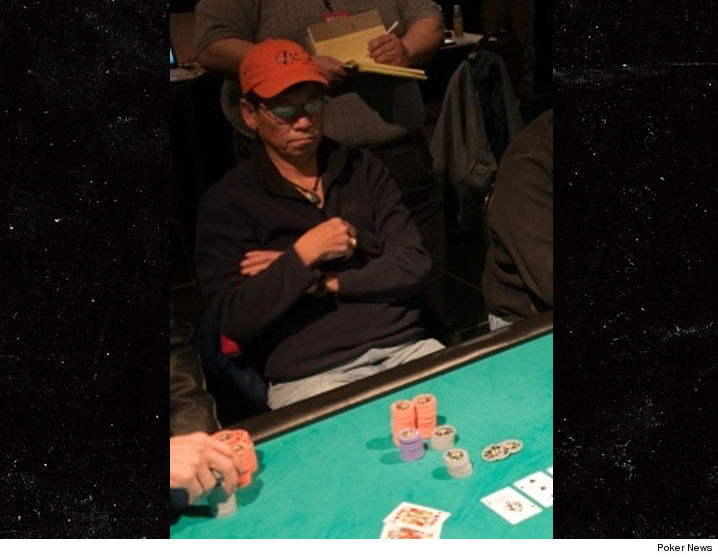 Dr. Dao is also a keen poker player, and has competed in World Series of Poker events in the past – winning a total of $234,664

In the hours after his identity was revealed, United saw its stock price crash in morning trading action.

But the price has recovered during the early afternoon, and is none back at $69.82, MarketWatch reports.

It came after United CEO Oscar Munoz released a statement Monday night that doubled down on his airline crew’s decision to remove an elderly passenger, claiming he was ‘disruptive and belligerent’.

The airline is facing a furious backlash after footage emerged of the 69-year-old, bleeding heavily as he was pulled from the jet.

Amidst the anger, Munoz issued a public apology saying he ‘apologized for having to re-accommodate these customers.’

But in a private email to employees, the CEO defended the crew’s actions, calling the passenger ‘disruptive and belligerent’ and praising his staff for going ‘above and beyond’.

HOW DOES UNITED DECIDE WHO GETS BUMPED FROM OVERBOOKED FLIGHTS?

United’s contract of carriage states that passengers to be forcibly taken off a flight in the event of overbooking will be ‘determined based on a passenger’s fare class, itinerary, status of frequent flyer program membership, and the time in which the passenger presents him/herself for check-in without advanced seat assignment.’

That means that if you have a certain type of fare class, checked in early, have a flier status such as gold, or even just own a barely used frequent flier card, you are less likely to be bumped.

But passengers taking advantage of budget seats appear to be of less value to the airline.

WHAT ARE YOUR RIGHTS IF A FLIGHT IS OVERBOOKED?

Overbooking is not illegal and every airline does it to maximize their revenue.

According to the the Department of Transportation: ‘DOT rules require airlines to seek out people who are willing to give up their seats for compensation before bumping anyone involuntarily.

‘Airlines set their own “boarding priorities” – the order in which they will bump different categories of passengers in an oversale situation.

‘When a flight is oversold and there are not enough volunteers, some airlines bump passengers with the lowest fares first.

‘Others bump the last passengers to check in. Once you have purchased your ticket, the most effective way to reduce the risk of being bumped is to get to the airport early.

‘For passengers in the same fare class the last passengers to check in are usually the first to be bumped, even if they have met the check-in deadline. ‘

United’s contract of carriage states that passengers to be forcibly taken off a flight in the event of overbooking will be ‘determined based on a passenger’s fare class, itinerary, status of frequent flyer program membership, and the time in which the passenger presents him/herself for check-in without advanced seat assignment.’

Any passengers who is forced to get another flight is entitled to compensation.

The DOT states:  ‘Travelers who don’t get to fly are frequently entitled to denied boarding compensation in the form of a check or cash. The amount depends on the price of their ticket and the length of the delay. ‘

ENTERTAINMENT: Best and Most Interesting National Costumes from Miss Universe 2018

HEALTH EDUCATION: 11Plants Which Give Out Oxygen Even During The Night

Against All Odds: Polyandry as Tradition,Wife married to brothers!