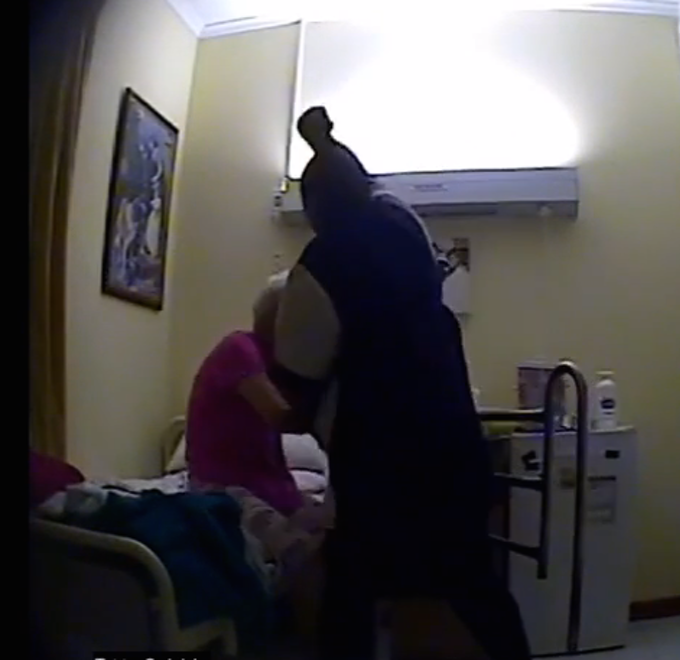 This is the horrendous moment a care worker appeared to launch an attack on a 94-year-old grandmother suffering from Alzheimer’s disease.

The shocking footage was captured by the daughter of the elderly victim, who set up a hidden camera after a tip off from a neighbour.

It appears to show the woman pushing the grandmother with her feet before standing up and grabbing her by the back of the head.

The alleged attack is completely unprovoked as the woman appears to hurl abuse and slap the elderly lady before shaking her head in her hands.

Local reports said that the daughter, Miriam Marino, was approached by someone who claimed that they saw the elderly woman being mistreated.

Ms Marino installed a security camera at her home in Buenos Aires, Argentina, which she shares with her mother, and was shocked with what it revealed.

The footage shows the elderly mother being abused for around 17 minutes.

The family released the video on social media to bring attention to the issue in a bid to protect people from future abuse.

The employee, previously dedicated to the care of children, was hired three years ago by relatives of the elderly woman, according to Argentine news website Infobae.

The publication reported that the daughter does not believe her mother suffered abuse during this entire time however.

The family later spoke with the carer, who explained to them that she was struggling to deal with problems at home.

The 94-year-old was unable to inform her family of the abuse because she could not remember due to her condition.

When Bernice Robertson viewed footage from the hidden camera she had planted in her 84-year-old mother’s nursing home, she couldn’t believe her eyes.

The tape showed Hope Robertson being assaulted by caregiver Ncediswa Mkenkcele, and not only was the nurse caught shoving the frail woman onto her bed, but she was also seen punching her in the face.

Bernice says she originally set up the camera after her mother, who cannot speak due to throat cancer, suffered an unexplained broken arm and had suspicious bruises and swollen marks on her body. The beatings were captured in February of this year.

“There were not enough good reasons as to what happened to her from the staff, other than that she had fallen off the bed or bumped herself,” Bernice explains to Herald Live. “It really has been a traumatic experience for me and my family. I saw my mother being beaten and pushed around.”

The nursing facility where the incident occurred, Lily Kirchmann Complex, has released a statement confirming they met with the Shepherd family.

“We apologized unreservedly for the alleged assaults against her,” Berea Gardens Retirement Foundation executive director Mike Schulze said. He added, “to the best of my knowledge, [this] is the first case of this nature in the history of the foundation.”

Ncediswa has since been arrested and charged with assault after Bernice took the footage to police in East London. The former staffer, who resigned from her post after being confronted over the tape, had her first court appearance on May 5.

Here’s hoping Bernice’s mother gets the justice she so rightfully deserves.

Two weeks ago, we published a story about a caregiver caught beating 84-year-old Hope Shepherd, a chronically ill pensioner at an upmarket East London home for the frail and elderly.

BALTIMORE —A Baltimore city woman who caught her elderly father being abused on tape by a home caregiver is fighting to get justice.

Jaki Taylor said she brought her 90-year-old father, John Taylor, home to be cared for after he had a series of strokes. She hired a caretaker but eventually found out that the woman she hired, Anastasia Olouch, was abusing him.

Taylor said she knew because she had installed security cameras in her home that caught Olouch, 54, abusing her father on four different occasions.

“In the video you see can Olouch using her fist and hitting him in the chest, stomach and arm. When we looked back (to earlier video), she also had him on his side and was banging him in his temples and slapping him in the back of his head,” Jaki Taylor said.

John Taylor suffered two strokes and was unable to defend himself or communicate, his daughter said. Police arrested Olouch and a grand jury indicted her on multiple counts of assault, abuse of a vulnerable adult and reckless endangerment.

On Aug. 8 she was set to stand trail, but failed to appear.

“The state would like to go forward with this, and we are asking the state to seek her via a warrant and bring her to justice,” said Margaret Burns of the city state’s attorney’s office.

Since the beatings, John Taylor has suffered several brain seizures. Doctor’s couldn’t say for sure if they were a direct result of the abuse, but Jaki Taylor said her father’s health has deteriorated ever since.

She is asking that anyone who sees Olouch call police.

“This is a woman who sat in my dining room everyday, supposedly reading the Bible. My God, what God was she serving? Not the one I know,” Jaki Taylor said.

She said that Olouch had also cared for children in Pennsylvania.

According to court records, Olouch is a citizen of Kenya. Her last known address was in northeast Baltimore.

Taylor said her father is getting great care in the nursing home facility in which he’s currently located.

A Baltimore city woman who caught her elderly father being abused on tape by a home caregiver is fighting to get justice.

Horrible torture of an elderly woman in a nursing home is caught on tape. The woman who committed the abuse has been tried and convicted.
Now, for the first time, we’re allowed to see the secret tape that revealed the truth.

The video is hard to watch for anyone, but especially for the victim’s three daughters. But they say this is proof, of why everyone should put a camera in the room, if they have a loved one in a nursing home.

The tape goes on to show the two workers tapping Mayberry on the back of the head, taunting her, jerking her out of her wheelchair, then shoving her head to apparently get her to lay down.

“It’s just something that we could have never imagined would have happened to her,” said another daughter Earlene Adkisson.

This is the first time the three sisters have seen the tape, since they discovered the initial abuse.

“I think it’s very sad that anybody would have to go through this, especially our mother,” said daughter Sandra Cisper.

Mayberry had dementia, and couldn’t remember what happened to her.

Her daughters originally put the camera in her mother’s room at the Quail Creek nursing home because they suspected someone was stealing from her.

VIRAL PEOPLE: She Thought She Was Pregnant With Tw...
NATION: What Happens to Expats After 2017 in KSA: ...
10 Most Cool and Beautiful Flowers In The World
PEOPLE: The Moro People Of The Philippines