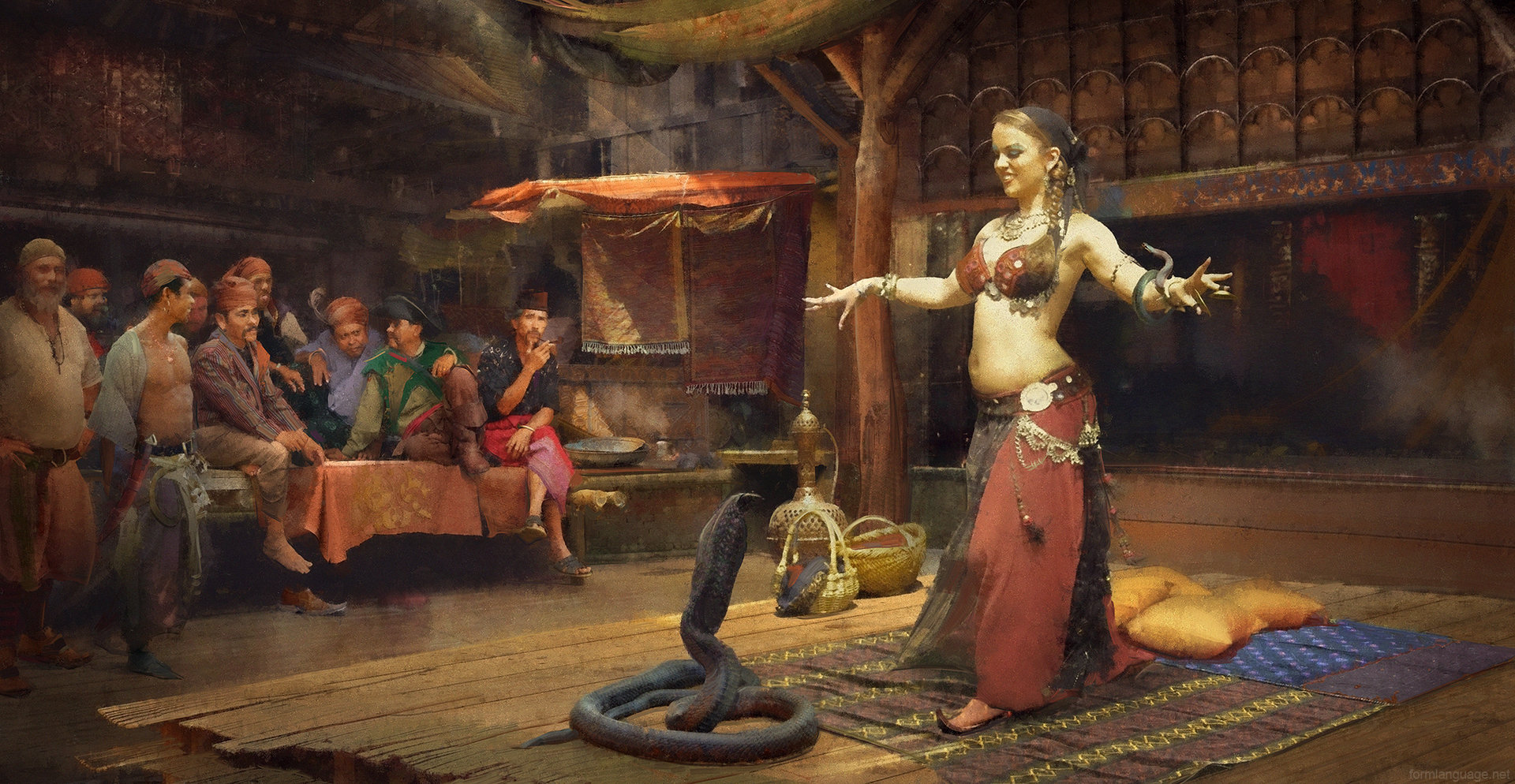 Snake charming is the practice of pretending to hypnotize a snake by playing an instrument called pungi or bansuri. A typical performance may also include handling the snakes or performing other seemingly dangerous acts, as well as other street performance staples, like juggling and sleight of hand. The practice is most common in India, though other Asian nations such as Pakistan, Bangladesh, Sri Lanka, Thailand, and Malaysia are also home to performers, as are the North African countries of Egypt, Morocco and Tunisia. 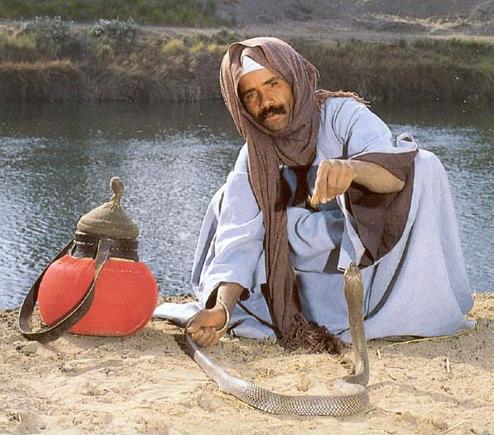 Ancient Egypt was home to one form of snake charming, though the practice as it exists today likely arose in India. It eventually spread throughout Southeast Asia, the Middle East, and North Africa. Despite a sort of golden age in the 20th century, snake charming is today in danger of dying out. This is due to a variety of factors, chief among them the recent enforcement of a 1972 law in India banning ownership of snakes. In retaliation, snake charmers have organized in recent years, protesting the loss of their only means of livelihood, and the government has made some overtures to them.

Many snake charmers live a wandering existence, visiting towns and villages on market days and during festivals. With a few rare exceptions they make every effort to keep themselves from harm’s way. The charmer typically sits out of biting range and the snake is sluggish and reluctant to attack anyway. More drastic means of protection include removing the creature’s fangs or venom glands, or even sewing the snake’s mouth shut. The most popular species are those native to the snake charmer’s home region, typically various kinds of cobras, though vipers and other types are also used.

Although snakes are able to sense sound, they lack the outer ear that would enable them to hear the music. They follow the pungi that the “snake charmer” holds with their hands. The snake considers the person and pungi a threat and responds to it as if it were a predator. 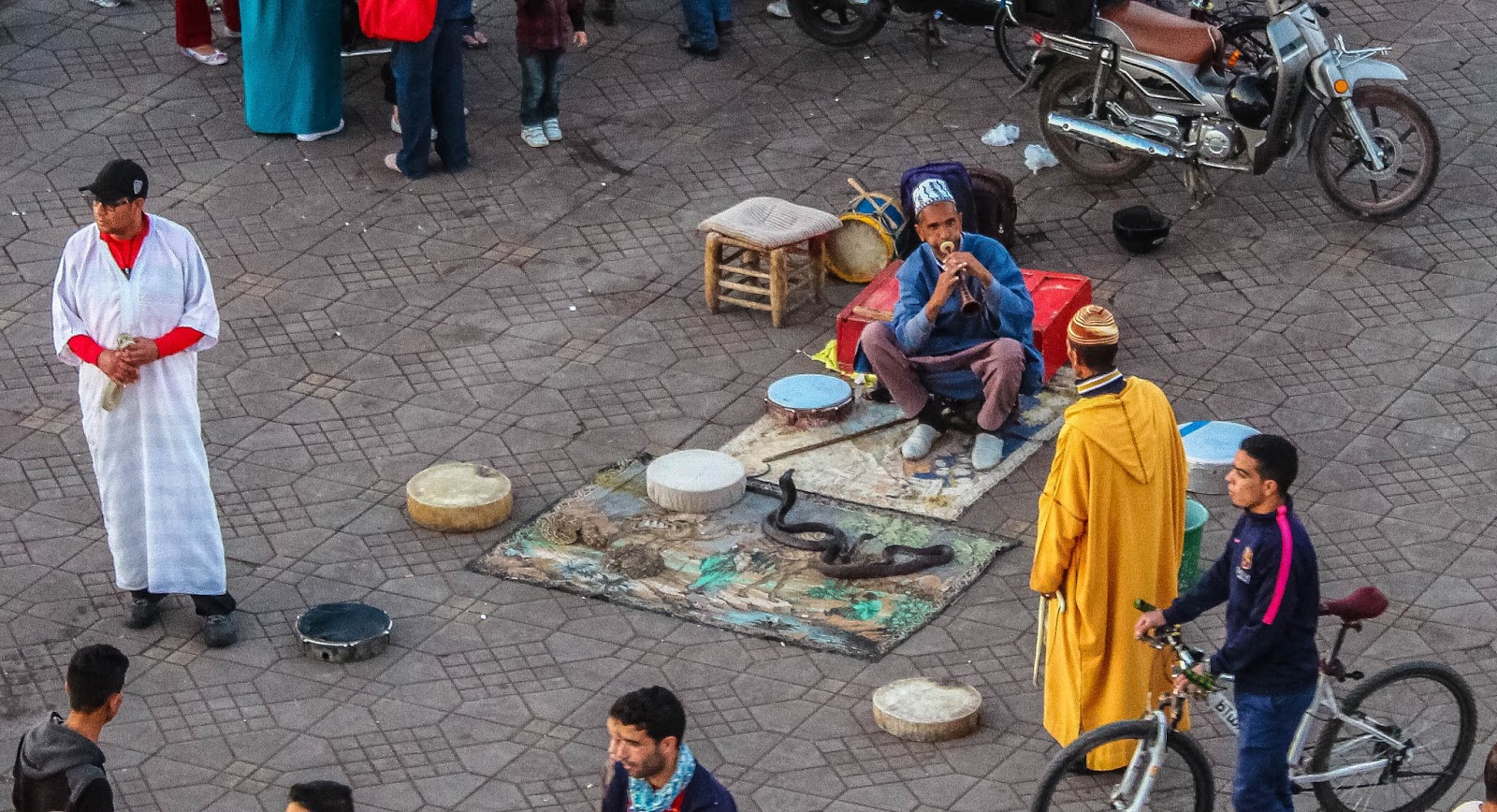 Snake charmers typically walk the streets holding their serpents in baskets or pots hanging from a bamboo pole slung over the shoulder. Charmers cover these containers with cloths between performances. Dress in India, Pakistan and neighbouring countries is generally the same: long hair, a white turban, earrings, and necklaces of shells or beads. Once the performer finds a satisfactory location to set up, he sets his pots and baskets about him (often with the help of a team of assistants who may be his apprentices) and sits cross-legged on the ground in front of a closed pot or basket. He removes the lid, then begins playing a flute-like instrument made from a gourd, known as a been or pungi. As if drawn by the tune, a snake eventually emerges from the container; if a cobra, it may even extend its hood.

Traditionally, snake charmers use snakes that they have captured themselves in the wild. This task is not too difficult, as most South Asian and North African snakes tend to be slow movers. The exercise also teaches the hunter how to handle the wild reptiles. Today, however, more and more charmers buy their animals from snake dealers. A typical charmer takes in about seven animals per year.

At home, snake charmers keep their animals in containers such as baskets, boxes, pots, or sacks. They then train the creatures before bringing them out into public. For those charmers who do not de-fang their pets, this may include introducing the snake to a hard object similar to the pungi. The snake supposedly learns that striking the object only causes pain.

More drastic means of protection include removing the creature’s fangs or venom glands, or even sewing the snake’s mouth shut. … They follow the pungi that the “snake charmer” holds with their hands. The snake considers the person and pungi a threat and responds to it as if it were a predator. (wikipedia)

What’s The Truth Behind The Snake Charming?

You know it’s a hoax – but how? The “snake charmer” on the New Delhi street sits cross-legged in front of the basket and begins to play his flute. Then, as if by magic, the cobra rises up, its hood spread, ready to bite. But instead, it seems hypnotized by the music, swaying with the sound of the flute, standing – but not striking. There’s got to be a trick – but what is it?

Well, the answer to that question reveals some surprising facts about the cobra. Belonging to the Elapid family, there are about 16 species in the cobra genus Naja, some approaching three metres in length. They are venomous, able to inject powerful neurotoxins through the fangs – or in some species, spit the poison into their enemies’ eyes. They all have expandable hoods, produced by spreading the ribs in their neck under elastic skin. Some live in water, others live in trees. They feed on amphibians or, in some cases, other cobras

But they’re all extremely dangerous – right? Well a look at the elements of snake charming shows that the answer to that question is both yes – and no.

Watching a cobra’s head rise up from a basket, and then watching it sway in a standing position is an eerie sight. But standing is very natural to a cobra – most can raise about a third of their body lengths. And, says cobra researcher Dr. Wolfgang Wuster of the University of Wales, it’s not surprising they would stand up in a “charming” situation. 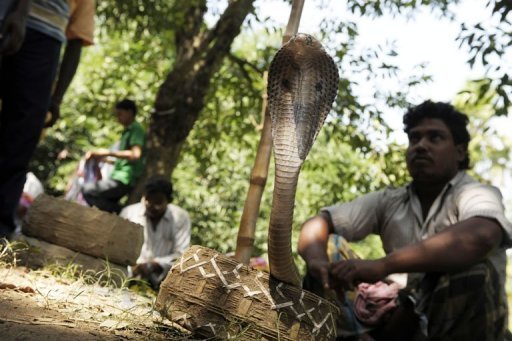 “The standing posture is the natural defensive posture of a cobra,” explains Wuster. “It says ‘Watch out, I am a cobra and dangerous, just go away and leave me alone, and we’ll both live happily ever after’. If you put a cobra in a a basket for a while and then remove the lid, the natural response of the startled cobra is to rear up.”
“Lots of snakes do this,” says Whit Gibbons, herpetologist with the University of Georgia’s Herpetology Lab in Savannah. “They do it to look larger, more threatening. Even non-venoumous snakes like the hognose snake will do it – but the hognose doesn’t bite. [However] the cobras have longer ribs to spread.”The spreading of the hood is also part of that defensive posture – and surprisingly, it’s not unique to the cobra.

A “charmed” cobra will appear mesmerized by the music. But, say scientists, while the snake has a type of hearing, it is actually responding to the sight – not the sound – of the flute. “Snakes don’t hear sound,” explains Cornell University herpetology professor Harry Greene, author of Snakes: The Evolution of Mystery in Nature. “But they are alert, and watch what’s moving. If the flutist sways, the snake sways, following him.”

So they’re not grooving to the beat? Maybe not, but they aren’t entirely unaware of the sound either.

“They don’t hear in the sense that we do,” clarifies Darryl Frost, curator in the department of herpetology at the American Museum of Natural History in New York. “But they’re very sensitive to vibrations, so they would certainly be aware of the music.”

How does a snake charmer “charm” a cobra into not inflicting a venomous bite? Well, according to the herpetologists, like other snakes, cobras are defensive, not aggressive -so it takes a lot to get a cobra to bite. “Cobras are generally reluctant to strike, and many specimens will rear up for a considerable period of time when cornered, but will not attempt to strike,” says Wolfgang Wuster. “Second, the flute is a rather hard object, and once the cobra has bitten it a few times, it will probably learn that this is both painful and futile, and desist in future.”

But what if the cobra decides he’s had enough – and does want to strike out at the human sitting so calmly before him? Well, contrary to how scary it looks, avoiding a cobra’s strike — and bite — shouldn’t be that hard for the experienced flutist.

For one thing, according to Wuster, the cobra’s striking range is basically the extent to which the snake is reared up, which is only up to one third of its total length (rattlesnakes, by contrast, have a striking range of about one-half their body lengths.) So the “charmer” knows how far back to sit.

And the cobras’ biting technique also makes it easier to avoid than something like a rattlesnake.

“Vipers [such as rattlesnakes] strike outward in a punching movement,” explains Darryl Frost. “Cobras tend to bite downward from standing – the same movement as if you set your bent elbow on a table and swung your hand downward. It’s slower and easier to predict.”

Even if a “charmer” was bitten, the bite would not necessarily inflict much damage. While Whit Gibbons estimates that some cobras have venom 20 times more powerful than that of a rattlesnake, judging the potency of such poisons is difficult, and the deadliness of any one bite will depend on a complex mix of factors relating both to the snake and its victim.

Snake charming, in fact, may be most dangerous of all to the seemingly “charmed” life of the cobra. 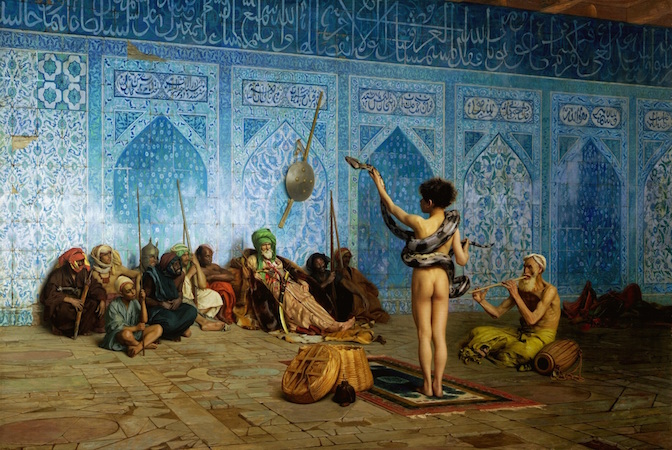 A group of four Vadi children with a Cobra: Children in India train to become snake charmer. Source: The Telegraph

Beauty: Do This at Least Once a Week and Your Face...
Anti-Inflammatory Turmeric Dressing
BEGGING GANGS HIRE BABIES AND DRUG THEM TO SLEEP
HEALTH EDUCATION: In the Beach..Toddler almost los...

Beauty: Do This at Least Once a Week and Your Face...
Anti-Inflammatory Turmeric Dressing
BEGGING GANGS HIRE BABIES AND DRUG THEM TO SLEEP
HEALTH EDUCATION: In the Beach..Toddler almost los...