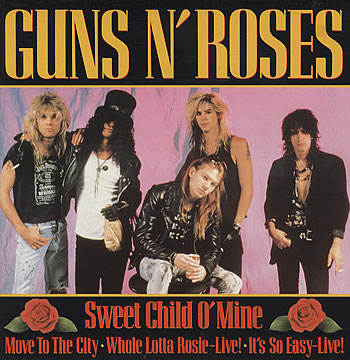 Sweet child o’ mine
Sweet love of mine

[3x]
Sweet child o’ mine
Sweet love of mine

Lead guitarist Slash has been quoted as having an initial disdain for the song due to its roots as simply a “string skipping” exercise and a joke at the time. During a jam session at the band’s house in the Sunset Strip, drummer Steven Adler and Slash were warming up and Slash began to play a “circus” melody while making faces at Adler. Rhythm guitarist Izzy Stradlin asked Slash to play it again. Stradlin came up with some chords, Duff McKagan created a bassline and Adler planned a beat. In his autobiography, Slash said “within an hour my guitar exercise had become something else”. Meanwhile lead singer Axl Rose was listening to the musicians upstairs in his room and was inspired to write lyrics, which became complete by the following afternoon. He based it on his girlfriend Erin Everly, and declared that Lynyrd Skynyrd served as an inspiration “to make sure that we’d got that heartfelt feeling.” On the next composing session in Burbank, the band added both a bridge and a guitar solo to “Sweet Child O’ Mine”.

While the band was recording demos with producer Spencer Proffer, he suggested adding a breakdown at the song’s end. The musicians agreed, but were not sure what to do. Listening to the demo in a loop, Axl started saying to himself, “Where do we go? Where do we go now?” and Proffer suggested that he sing that.

The thing about ‘Sweet Child O’ Mine,’ it was written in five minutes. It was one of those songs, only three chords. You know that guitar lick Slash does at the beginning? It was kinda like a joke because we thought, ‘What is this song? It’s gonna be nothing, it’ll be filler on the record.’ And except that vocal-wise, it’s very sweet and sincere, Slash was just fuckin’ around when he first wrote that lick. BEAUTY: To Make Your Lips Soft and Pink

Marc Mero’s Powerful message About A Mother&...
TRAVEL: THE 10 MOST EXPENSIVE CARS IN THE WORLD (2...
NO TO RACISM: RACISM IS HARMFUL TO HUMAN RIGHTS AN...
May suffer from: Hybristophilia, being aroused by ...

Marc Mero’s Powerful message About A Mother&...
TRAVEL: THE 10 MOST EXPENSIVE CARS IN THE WORLD (2...
NO TO RACISM: RACISM IS HARMFUL TO HUMAN RIGHTS AN...
May suffer from: Hybristophilia, being aroused by ...