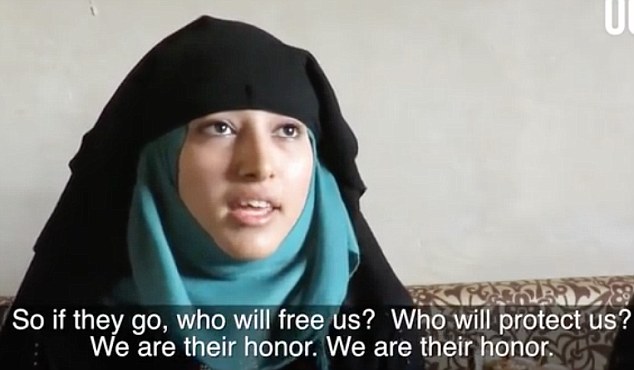 Syrian wives and mothers left behind condemn men who have fled the country, and ask: ‘Who will free us? Who will protect us?’ It is wrong to leave your country’

By SARA MALM FOR MAILONLINE

Syrian men fleeing their war-torn home country are being criticised by the women ‘left behind’ to live in squalor in refugee camps.
When questioned about their feelings regarding the large number of men who have fled Syria for Europe without their wives and children, these women do not mince their words.
One woman accuse them of abandoning Syria in a time of crisis, while others stop short of calling them cowards by saying it is ‘haram’ – forbidden under Islam – to leave their country. Accusations: One of the women interviewed in the Syrian refugee camp slams the many men who have chosen to flee to Europe without their families

The women, interviewed by American video journalist Bilal Abdul Kareem, all live in a refugee camp in Syria, having left their home cities and villages during the four-year civil war.

A young woman sitting in one of the temporary buildings in the refugee camp says she is very upset about men leaving women and children behind in Syria. .

‘We have a crisis here. So if they[the men] go, who will free us? Who will protect us?
We are their honor. We are their honour… Who will avenge [the martyred]?’
Another accuses Syrian men of abandoning women and children, leaving them to rely on ‘outsiders’ to help the population and fight the war. Harsh words: Another young woman, wearing a full niqab, accuses Syrian men of leaving the women to be protected by ‘outsiders’ Torn apart: The women interviewed all live in a refugee camp in Syria, having left their home cities and villages during the four-year civil war

One woman, who says she has fled her home in Homs, western Syria,says she will not abandon her home country even if ‘European nations are better’.
“By Allah, it is wrong! Isn’t this wrong? It is wrong to leave your country and your family.
‘We[women] are bearing everything not to leave our country… it’s harder than going to European countries, its hard.
Another adds: ‘In my opinion it is haram [forbidden under Islamic law] to leave the country, they leave it when it is in a bad need.
‘They [men] have to defend it.They have to stand by its people and not leave it and go just like that.’ Forbidden: The women all accuse the men who have fled alone of abandoning Syria in one way or another

She is then asked what she would say to the thousands of men who have fled Syria for Europe, to which she responds that she would call for them to come back and fight in the civil war to ‘defend the motherland’.
Europe is struggling to cope with its worst migrant crisis since World War Two as hundreds of thousands flee war and persecution in Africa and the Middle East.
More than 500,000 have arrived in Europe across the Mediterranean so far this year, more than double the figure for 2014, according to the international Organisation for Migration.
German authorities, meanwhile, expect up to 1.5million refugees to come to the country this year, up from a previous estimate of 800,000 to one million.

Treatment: 10 Insects that were or are Used to Cu...
70 Beautiful Nail Art Designs
“When I Look At You” by MILEY CYRUS
Travel: 10 amazing pics of Lake Natron, the Mummif...

Why the French are so strict about Islamic head co...
How To Apply Lipstick
Parenting and Child Health – Health Topics &...
UNUSUAL: Weird and Bizarre Baby Customs From Aroun...

Why the French are so strict about Islamic head co...
How To Apply Lipstick
Parenting and Child Health – Health Topics &...
UNUSUAL: Weird and Bizarre Baby Customs From Aroun...