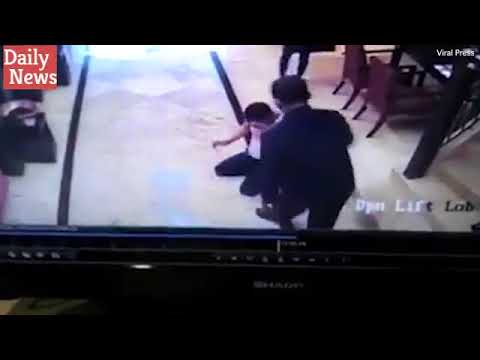 This is the terrifying moment a man’s smartphone explodes in his front shirt pocket. Hotel supervisor Yulianto, 47, was waiting in the lobby of the building when he suddenly felt the device heat up. He reached up to the phone in his front pocket but moments later it erupts in a fireball.

CCTV captured the moment the mobile phone exploded and burst into flames at the Hotel Ciputra in Semarang, Indonesia, on Saturday, September 30,2017.

Yulianto falls to the ground as an onlooker rushes to help him. He then rips off his shirt while it is engulfed in flames. The hotel worker said he had never had problems with his 2013 phone before but suddenly felt it heat up.

He said: ”There was a strong sensation of heat and I felt something start to shake. ”Before I knew what was happening there was fire and I panicked. I took off my shirt as quickly as I could.”

Police said that Yulianto was rushed to hospital where he was treated for minor burns on his chest. The injuries were limited by Yulianto quickly taking off his top.

He is said to have been using the Wifi, Bluetooth and GPS simultaneously causing the phone to overheat.

Agus Triatmojo, head of public relations at Central Java Regional Police, said: ‘The incident happened on September 30. The phone was a Samsung brand and Grand Duos model. The owner was Mr Yulianto, aged 47.

‘Mr Yulianto immediately removed his shirt after the phone exploded. He had no significant injuries.’

Samsung has been plagued by more than 100 incidents of exploding phones, causing it ot.

He said: ‘Consumer safety is our top priority, and we’ve contacted the consumer concerned to provide the necessary support, and we are currently investigating the device.’

MUSIC: You Changed My Life In A Moment

HEALTH: Can You Really Heal Cavities?
This I Promise You (‘N SYNC LYRICS)
Dr. Raymond Rife: Cured Cancer in 1934, Then He wa...
The most expensive typing error ever? ‘Eventually ...

HEALTH: Can You Really Heal Cavities?
This I Promise You (‘N SYNC LYRICS)
Dr. Raymond Rife: Cured Cancer in 1934, Then He wa...
The most expensive typing error ever? ‘Eventually ...