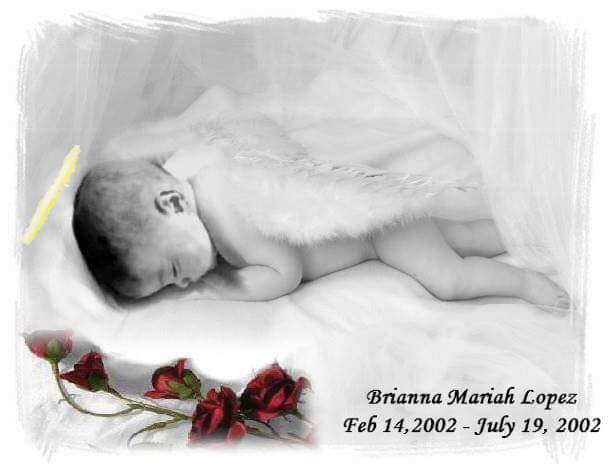 This is a disturbing but important story of a fatal case of child abuse. It is the case of baby Briana Lopez, who was abused from birth by both parents and other family members. We as a nation must make cases like these nonexistent.

Babies are not meant to know what pain and suffering feels like. They’re Supposed to be shown & to know of love, affection, protection, laughter, hugs, kisses & a bottle to be ready to feed to them with a full tummy. But not even a second of that love was given to Baby Brianna. Not one day of her short life was she not abused, sexually & physically bruised, battered with multiple blows to her body, & head. Being tossed & dropped several times, over bruises were newer ones 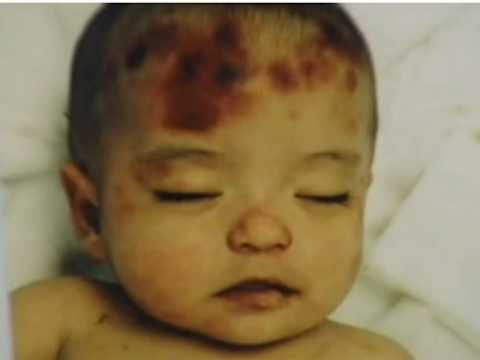 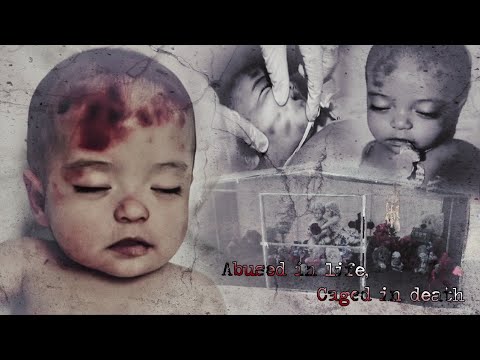 Autopsy results showed Brianna Mariah Lopez, 5-months, 5-days old, died from cranial cerebral injuries. She had bruising and scraping injuries throughout her head, as well as on her upper forehead.
Baby-Briana’s died on July 19, 2002 in Las Crucens, New Mexico. She was only five months old when she was pronounced dead in the Memorial Medical Center emergency room at 11:10 am. The reasons of her death, child abuse.
Brianna had 13 human bite marks all over her body and head. There were extensive injuries to her head and fatal injuries to her brain. She had bleeding in the brain as well as around the nerves of her eyes. Her skull was fractured in two places, there were two rib fractures, two more on the thigh bones of each of her legs, and a fracture to her left arm. She had also been raped by the ones who were supposed to take care of her, her father and uncle.
Brianna was a victim of child abuse, considered by many people as perhaps the worst case in New Mexico history. Her parents, Stephanie Lopez and Andy Walters, and an uncle, Steven Lopez were convicted and are in prison.
The abuse started almost immediately. Instead of hugs and kisses Brianna received slaps and pinches. She was tormented on a daily basis, both verbally and physically. Slapped, kicked, punched, pinched, thrown, raped, etc. You name it this infant endured it.
When Brianna would cry at the pain that was inflicted on her, her abusers would laugh and stuff her mouth with clothing to muffle her screams. Her own mother would bite and pinch her when she got frustrated by the crying, but for the most part it was the infant’s father and uncle who tormented her while Stephanie sat back and ignored her daughter’s cries.
Medical examiners would later report the marks as being both old and new which proved prolong abuse. Brianna also had bleeding on her brain, both old and new, as well as broken ribs, broken legs, broken arms, lacerations to her fingers, vagina and anus. She had been abused everyday of her short life.
Baby Brianna was what many would consider a strong baby because she managed to survive 153 days despite coming into this cruel world weighing only several pounds.
On the evening of July 18th, 2002 Briana’s parents get drunk. Briana’s mother, Stephanie, claimed to have had only a few beers before heading to bed in the same room the others were in. During this time both Andy and Steven decided to play their own sick, demented game where they would toss Brianna up in the air, let her hit the ceiling and watch her tumble to the ground. They would later tell authorities that Brianna was screaming and wailing when this was happening. Apparently the baby’s mother didn’t hear her daughter screaming and crying in agony.
That same morning Stephanie noticed Brianna needed a diaper change and Andy volunteered to do it. During the diaper change he wrapped a baby wipe around his finger and inserted it into Brianna’s anus. He also sodomized her with foreign objects. When Stephanie noticed Brianna near death she ignored it and decided to wait several hours before calling an ambulance.
Many relatives including Brianna’s grandparents knew what was occurring but ignored it. They knew their granddaughter was being raped by both her father and uncle, they knew she had pinch marks from head to toe in different stages of healing, they knew she was being tormented and had marks, cuts and lacerations but they turned a blind eye and let it continue for five, going on six more months until baby Brianna’s little body couldn’t handle the abuse any longer.
The most incredible part of this story is that Baby-Briana’s relatives, including her grandparents were sentenced to 30 days in jail for failing to report the abuse. The maximum is one year.
Stephanie Lopez was convicted of negligent child abuse after she failed to do anything to help her child. The New Mexico Corrections Department said that SHE COULD BE RELEASED AS EARLY AS SEPTEMBER 28, 2016. Less than 15 for her daughter’s torture death.
I don’t see how justice can be serve if this women goes free. She is obviously a threat to society. She should spent the rest of her life in jail paying for the suffering of the wan she was to protect.

Sentencing…
Susana Martinez asked for the maximum punishment possible for all of them. Sadly, their sentences do not fit their crimes. It took a jury
of seven men and five women nine hours to find all of them guilty.

Andy Walters, the father, received a mere 57 years in prison and
her Uncle Steven Lopez received only 51 years for sexually abusing
and causing the death of Briana due to abuse and neglect.

Stephanie Lopez, her mother received a very short sentence of 27 years in prison for child abuse and neglect resulting in death. The
Jury decided that she was not guilty of intentional abuse since she
did not inflict the abuse but had allowed it to take place.

Briana’s Grandmother, Patricia Walters and her Uncle, Robert Walters Jr each got off easy with only 60 days in jail for failing to
report the abuse and save Briana’s life.

Keep in mind that prisoners usually get out much earlier than the sentences given, with good time, 20% of the sentence can be eliminated. There is also parole available.

As each guilty verdict was read, the Lopez and Watlers families
showed their emotions by embracing and crying. The only one of
the defendants to show emotion at that time was Steven Lopez who
is the twin brother of Stephanie, put his head in his hands and started to cry.

When the jury was dismissed and had left the court room, the
defendants then began to show their emotions by crying and
hugging their lawyers who tried to console them. Stephanie and Steven were allowed to hug each other and cry before being lead out of the court room.

LAS CRUCES, N.M. —A woman who received a 27-year sentence for not stopping her infant from being raped repeatedly by the girl’s father is up for parole in October.

Members of the In Memory of Brianna Lopez page and other similar groups on Facebook remain vocal about requests to revoke parole for Stephanie Lopez.

“People want more to be done,” said Natalie Puccio, of Buffalo, New York, who started the page. “They want to know how to keep her in jail, basically.”

But a local group, the Baby Brianna Foundation, is not opposing parole.

“We cannot hate her, we can’t judge her, that’s not our place to even do,” said Julia Silva, with the foundation. “Let her come out and rehabilitate.”

The foundation works to support children and mothers who are victims of violence. It’s going to have a birthday celebration for Brianna at the girl’s grave in Las Cruces.

“She was never able to even eat a piece of candy or be a child or play at the park with anybody, so we want people to come and celebrate in memory of her,” Silva said.

The event is scheduled for Feb. 14.

Brianna’s death has been called the most brutal child abuse case in history. In 2005, New Mexico passed the Baby Brianna bill, increasing penalties for child abuse resulting in death.

Treatment: Dry Shampoo and its Usage
VIRAL PEOPLE: She Thought She Was Pregnant With Tw...
Terror of Love: Acid Wash
HEALTH EDUCATION: Detox With Activated Charcoal

Progeria: AGE BEFORE MY TIME, 1 IN A MILLION