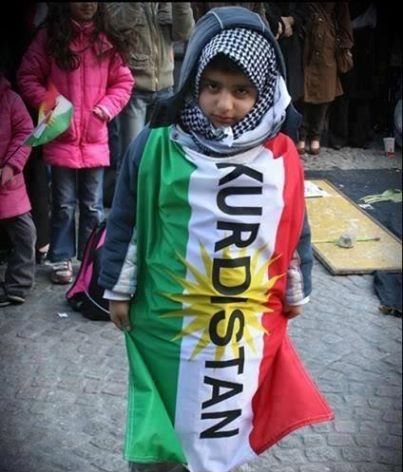 A Child Pointing to the KRG Flag Carved on a Hill

The Kurds and Their History

Iraqi Kurdistan or the Kurdistan Regional Government (KRG) is an autonomous region which is part of Iraq.  After many years of struggle the Kurds in Iraq finally established a de facto or autonomy in 1991 after they led a revolution against the Bath regime.  From 1991 to 2003 the Kurds ruled themselves under the protection of the United States.  In 2003, when the Bath regime was removed from power, the Kurds established their own government (KRG).  Since then the KRG has become an independent region with its own economy, government, and parliament.

However, the KRG has not stopped at that, but it has aimed at extracting and selling its oil independently from the Federal government.  This in turn has led to deteriorating relations between the Federal government and KRG.  Many argue that KRG wants to create an independent state, and that is the reason why they want to have their own independent oil policies.  Whether this is true or not, this is not the point.  The real point is that if the KRG wants to get independent, then there are some necessary steps that must be taken.  Strengthening the economy is the most necessary point among these points.  To strengthen the economy, the KRG must decrease its dependence on oil, but by extracting its oil, the KRG did the exact opposite.  It was not extraction per se that was problematic, but the increasing dependence of the KRG on oil is absolutely problematic.

This research paper investigates the economy of Iraqi Kurdistan, and it will argue that without a strong and independent economy, Iraqi Kurdistan cannot become independent even if it has all the other requirements for independence.  Further, this paper will provide the formula of how the KRG can strengthen its economy.  In other words, it will establish the necessary changes needed in order for the KRG to have a strong economy.

Toward an Independent Kurdistan:

The Kurds have for a long time wanted to create their own state.  However, the Sykes-Picot agreement and later the Treaty of Lausanne shocked the nationalist Kurds who had dreamed of creating their own independent state.  These agreements and treaties divided the Kurds into four parts in four different states.  Kurds were spread over Turkey, Iraq, Iran and Syria.  In neither of these countries Kurds were treated as first class citizens.  Instead they were forced to suppress their identities and adopt the identities of the state in which they were forced into living.  So, Kurds began revolutions in all four parts, and sometimes they were successful in establishing their own separate states as in Iran in 1946, but it only lasted for one year.  The struggle has continued, and the dream has not died.

In recent years, the luckiest part has been Iraqi Kurdistan.  After the fall of Sadam Hussien, the Iraqi Kurds have become to have more autonomy in their own region.  Still, they have not been able to achieve their goal of having their own independent state.  There are many reasons preventing the Kurdistan Regional Government (KRG) from creating their own state.  First, constitutionally Iraqi Kurdistan is part of Iraq, so any move by Iraqi Kurdistan toward creating an independent state is against the constitution and that might lead to armed conflict.  Second, there are territorial disputes.  For example, the KRG claims that Kirkuk is part of the KRG, but the Federal government denies this.  Since the Federal government has more power, then the KRG cannot establish an independent state while many disputed territories are still under the control of the Federal government.

Thirdly, for Iraqi Kurdistan to become independent, it needs international support and recognition, and that is very difficult to get.  Most of the states around the world want the status quo to continue and do not want to divide Iraq into several parts.  Fourth, the KRG must have some suitable political opportunities so that creating an independent state will be politically feasible.  In other words, some conditions must exist in which the Federal government of Iraq and neighboring states such as Syria, Turkey and Iran will not block Iraqi Kurdistan from creating an independent state.

First, with ISIS in Iraq, the Constitution of Iraq was abandoned, and Iraq declared State of Emergency.  Therefore, there was no law and order, and that was a great opportunity for the KRG.  Second, when ISIS came, the Iraqi military withdrew from most of the disputed territories, and the Peshmarga forces of the KRG moved into Kirkuk and replaced the Iraqi military.  Thirdly, even international recognition became more possible when Benjamin Netanyahu declared the support of Israel for the independence of the KRG.  Fourth, even a political opportunity became available when the Federal government became weak, and Turkey, Iran and Syria became preoccupied with ISIS.

So, there is an important question that must be asked after all this: Why didn’t an independent Kurdistan come into existence after almost all the assumed conditions had come into play?  The answer is that because the most important thing did not exist, a strong economy.  The people in the KRG had not gotten their salaries for three months, and the KRG was not able to support itself financially without the international help and loans.  Finally, the KRG realized that even if the Federal government let the KRG to establish an independent state, the KRG could not do that because they still highly needed and depended on the central government economically.

The economy is the key for the case of the KRG to become independent, but currently the KRG economy is drowning.  Therefore, the dream for an independent state now, is that, it is just a dream.

MUSIC: You Changed My Life In A Moment
Flower Photography: 50 Unique Flowers That They Fo...
Baby in China Born with Second Face
The Miracle of The Gelatin Recipe – Will Heal Pain...

How To Apply Lipstick