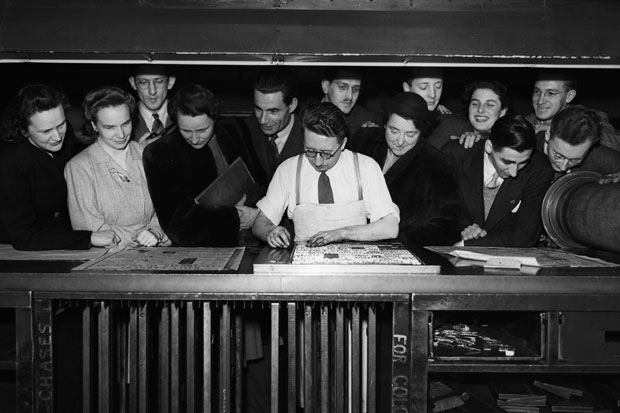 Nasa’s missing hyphen; the extra ‘s’ that could cost £8.8 million; and recipes for disaster

Typographical errors used to be the preserve of craftsmen – this one is a compositor showing off to visitors at the Daily Express in 1948. Now anyone can make them. Photo: Getty

In Paul Gallico’s 1939 novel The Adventures of Hiram Holliday, the hero’s journey is set in motion by a comma. Hiram is a copy-reader on a New York morning paper, and the comma — ‘eventually known as the $500,000 comma’ — is one he inserts into a contentious article that saves his employer in a libel case. The publisher rewards him with a $1,000 bonus and a month’s paid vacation, and he sails for Europe, where he fights Nazis and rescues a princess.

In real life, sadly, publicity comes not to the Hirams of the world but to the anti-Hirams. Another one had his day in the stocks last week, when the High Court gave its judgment on what may eventually be known as the £8.8 million ‘s’.

This ‘s’ cropped up in a database search made at Companies House six years ago by a clerk who was meant to register the liquidation of a firm called Taylor & Son. Instead he applied a digital death notice to Taylor & Sons, a Welsh engineering company that had survived two world wars and was just then reorganising to deal with the aftermath of the financial crisis. Though the information at Companies House was corrected three days later, the mistake had already spread into other people’s records: Taylor & Sons’ suppliers stopped its credit, and the business went into administration.

That £8.8 million figure is the price that lawyers for the company’s former managing director put on the error. Even if it’s accepted in full, however, the ‘s’ will not be the most expensive typo in history. For starters, there is the single missing character blamed for the failure of Mariner 1, an unmanned Nasa mission bound for Venus that fizzled shortly after its launch in 1962. (Contemporary reports spoke of a hyphen left out somewhere in the guidance code, but excited pedants have since advanced several competing theories: Mariner 1 is probably the only space probe to have a section in its Wikipedia entry headed ‘Other punctuation’.)

Nor yet, though Taylor & Sons had 250 employees, is it the most tragic. In New South Wales two years ago, a boy of 18 months went into cardiac arrest while his parents awaited an ambulance that had apparently been booked on to the dispatch system for 19.14 instead of 9.14. He later died in hospital.

It does, however, have all the characteristics of a classic catastrophic typo: a single tiny change inserted, like Hiram’s $500,000 comma, at a point where it turns out to make an explosive difference. The perfect typo is small enough that writers and editors read over it, subconsciously substituting what should be there, and yet consequential enough that every innocent reader will notice it.

For maximum horror, the typo should give rise not to an absurdity, but to something plausible yet wrong. The notorious Penguin Pasta Bible of 2010, in which the tagliatelle with prosciutto called for ‘freshly ground black people’, caused much sniggering, a great deal of justified embarrassment, and a reprint; but it won’t have ruined anyone’s dinner. I’m not sure as much is true of the spicy tomato soup recipe that appeared in the Guardian last October, specifying half a tablespoon of cayenne pepper instead of half a teaspoon.

Semi-automated systems, like the Companies House database or the New South Wales ambulance dispatch computer, can turn clumsiness into destruction more efficiently than human ones, but their limited inputs also make them easier to secure against typogeddon. (Companies House, for instance, already had a policy of rejecting any winding up order that didn’t come with the company’s unique identifying number —but it had apparently failed to explain this properly to the people meant to do the rejection. They almost certainly know now.)

With continuous prose, here at The Spectator, for instance, there is still no substitute for a skilled proofreader — preferably one coming to the material fresh, so that there are no previous drafts or expectations to get between them and the text. The kind of focus required is peculiar: you have to see exactly what’s in front of you while simultaneously forming pictures of what might be meant to be there, and spotting the difference.

Very few people can keep that double focus up all the time — as readers of this magazine, for which I am chief sub, may have noticed. That’s why my heart goes out to the anti-Hirams. In time, the spellcheck tolls for us all.

Peter Robins is The Spectator’s chief sub, a job that makes him responsible for all the typographical errors in this magazine

Melbourne woman is filmed giving birth in a stream...
Gorgeous and Beautiful Hair Colors and Styles
The Journey By Lea Salonga
Photography: The Power Of Black And White

Woman gives birth to 10lb baby in car and dad capt...
Adorable: Parenting in the Wild
‘I was raped 300 times as I slept – by...
TRAVEL: Amazing Double Lake, Patoginia, Chile

Woman gives birth to 10lb baby in car and dad capt...
Adorable: Parenting in the Wild
‘I was raped 300 times as I slept – by...
TRAVEL: Amazing Double Lake, Patoginia, Chile