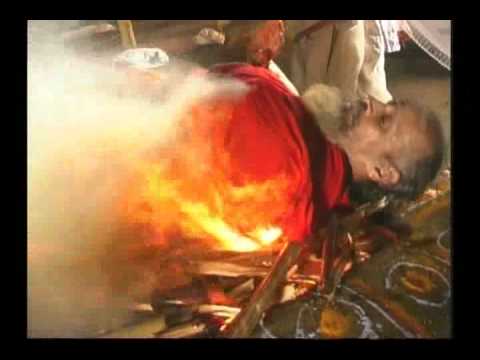 Story: Amazing miracle – fire yogi – Man lies in fire. Guaranteed Good Supernatural Documentary. You see the videos for yourself and testify whether God exists or not, Planet Earth is funfare and we have to take time-out for Restoring our soul’s Lost relationship of “Love For God”, this the only purpose of this human life, it will fill life with joy beyond the present life, away from bad karma.. Hedonism & materialism take us to superficial complexities away from spiritual reality & into illusions, illusions means which cause misery, i.e is repeated birth, death, old age & disease.

Other Versions
The Fire Yogi is a 47 minute documentary exploring the journey of a Yogi who has the extraordinary ability to use a unique breathing technique to get into union with Fire. This documentary portrays a rare and unusual Fire Ritual performed by a Yogi from India and the subsequent chemical analysis of his clothing & physical tests that examine this supernatural phenomenon. The Yogi has performed this Fire Ritual for a total of 1000 days over the last 45 years. The Yogi, weighing a mere 94 pounds (43 kilos), has been able to survive on only two bananas and a mere glass of milk with a few drops of water twice a day for the last 28 years. Many aspects of the Yogi are on the edge of unbelievability, while at the same time highlighting the power and endurance of human mind, body and spirit. The Fire Yogi is a 47 minute documentary exploring a Yogi who has the extraordinary ability to use a unique breathing technique to get into union with Fire.

Hoax or Fact:
The story about Fire Yogi is a Fact.

Analysis:
The messages come with a video showing an Indian Yogi performing fire ritual and sleeping in union with it without getting burnt or hurt. The story is a fact.
In 2002, as a part of quest for Tantrics and Gurus in India, Mike Vasan, a director and producer, went to Tanjore in Tamil Nadu and met a special Yogi named Rambhau Swami (aged 63 then), who had an amazing power of getting into union with Fire. He developed a complete documentary on the sacred ritual that Rambhau performs, where he sleeps on fire of yagna without getting hurt or burnt. In the documentary video, he shows and explains the unbelievably mystic lifestyle and rare fire ritual of the yogi, Rambhau Swami. Rambhau Swami claimed that he started his career as a researcher at an ancient library and then went on to learn ancient vedas and their importance before meeting his Guru who taught and showed him a completely different life close to his Spirit and God. He also says that he has been drinking only a few drops of water since 1975, and two years later, he started limiting his daily diet to a banana and a cup of milk, followed by only three hours of sleep each night. But surprisingly, he looks completely normal, and unlike most others, he is simple, open minded and down to earth, willing to explain his rare fire ritual and its importance.

Rambhau Swami’s famous and elaborate fire ritual starts with his holy bath, followed by meditation, pranayama and a traditional ceremony of honoring Ganesha. The fire place of the ritual is a kind of sunken pit, into which Rambhauswami offers wide variety of food and other holy items like gallons of ghee, rice, coconuts, sugar cane, herbal green grass, etc. While offering these, and as the Fire sets ablaze, Rambhau Swami goes into a deep meditative state, covered only by a woollen shawl. He is shown to interact with the fire with his virtual signs, and at times he gets himself into the fire place, sleeping comfortably in union with the fire, without getting burnt or hurt. And surprisingly, even his woollen shawl does not burn in fire, but for few scars here and there, which he says happens when he loses his concentration and connection with fire. He is shown to perform this fire ritual for 14 hours at a stretch without any kind of break in between, and on fasting. After completing the ritual, he breaks it with only 3 sips of water. The yogi also claims that he has performed this special fire ritual for about 1000 days in his last 45 years. And in one instance, he claims he has performed this ritual for 27 days continuously without any break. 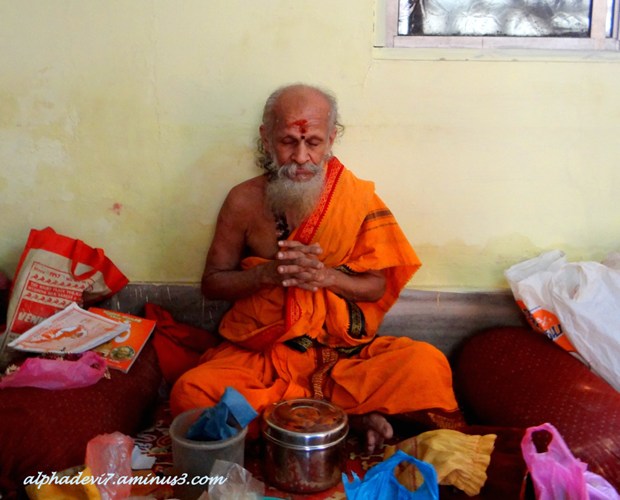 Rambhau says that with his holy rituals, sacred mantras and deep meditation, he controls his mind and gets into union with the fire; explaining that at that stage, fire becomes his friend and will not hurt him. He gives the complete credit to his Guru who taught him all this. He also says that when he is in normal state of mind, he is just like any other person, and the fire will burn him likewise.

The documentary team, with the help of international standard medical testing, has performed complete tests on Rambau Swami’s body before and after the fire ritual, along with the woollen shawl that he used to cover himself during the fire ritual. The results were unbelievable. Fire tests proved that the woollen shawl was pretty normal, and did not contain any fire-resistant material, but for some traces of fire burns that happened during the ritual. After the ritual and the tests, the shawl was shown to burn in fire as any other ordinary woollen material would do. And Rambhau’s physiology was shown to be different. His kidney function was abnormal, because his daily intake of food was close to nothing. He was also shown to possess high cholesterol on such a low diet – apparently his body seems to be creating cholesterol on its own. The same medical tests were done after 3 weeks of the ritual and results were found to be similar.

These abnormal medical reports and the unusual fire ritual of Rambhau astonished medical experts around the world as they could not explain it scientifically. They did not understand how Rambhau was able to survive on few drops of water per day for more than 28 years. They thought that with his powerful breathing techniques, meditation and unusual body, he is able to create a protective aura around him that safeguards him from getting burnt in fire. The video series on right shows the documentary of fire ritual of Rambhau Swami.

“Through the mastery of meditation, the Yogi is able to resonate with the qualities of kinetic energy. His aura seem to be protecting him.” said Dr. E.F. Block, Neurologist, Austin, Texas. When asked about his intentions and future aspirations, Rambhau Swami says that his ultimate goal is to help the world, and says that he does it by healing humanity through his sacred fire rituals. He also speaks in English saying:
“The life source energy called ‘Prana’ is the secret to our existence. When Prana is properly regulated, no disease can attack you. Imbalance in Prana is the root cause for all our problems.”
He says that he has many long-term goals and aspirations, like gradually reducing his diet gradually and stop eating completely, so that he can reduce his weight and levitate above the fire at his will. This amazing Indian yogi strongly believes that unconditional prayers, hope, faith and love will always produce miraculous results in healing others.
This factual story of Rambhau Swami is a great example to show the power of human’s mind; and the significance of ancient Indian science, and Vedas.

References:
The Fire Yogi of Tanjore
The fire yogi : a story of an extraordinary journey

World’s Top 10 Most Beautiful and Richest Mu...
CHILD ABUSE: A Heart-Breaking Sketches Drawn By A ...
LOVE SMS, QUOTES, AND POEMS 1
Please Be Careful With My Heart Lyrics by Jose Mar...

World’s Top 10 Most Beautiful and Richest Mu...
CHILD ABUSE: A Heart-Breaking Sketches Drawn By A ...
LOVE SMS, QUOTES, AND POEMS 1
Please Be Careful With My Heart Lyrics by Jose Mar...