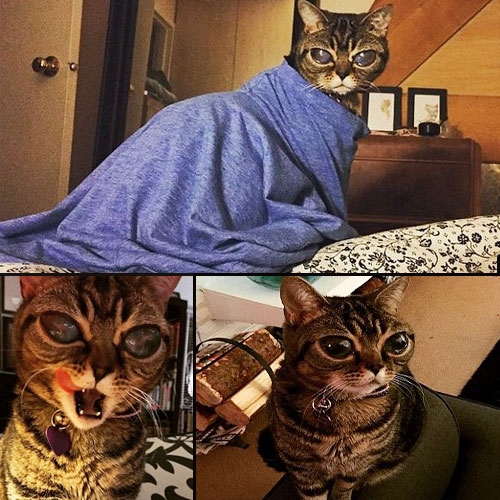 Meet Matilda the ‘alien cat‘ – whose huge dark eyes have made her an Instagram star.

The two-year-old has amassed more than 30,000 followers after her eyes became enlarged and glossy as a result of a medical condition.

Her profile reads: “Have you seen anyone else that looks like this? I’m seeking my kind.”

Matilda, according to her owners, has a rare condition called lens luxation, which caused her eye lenses to spontaneously detatch. If you want to believe in the existence of life on other planets, then you might be convinced by Matilda – the alien cat.

And although she isn’t actually from outer space her giant dark eyes make her look like a moggy from Mars. 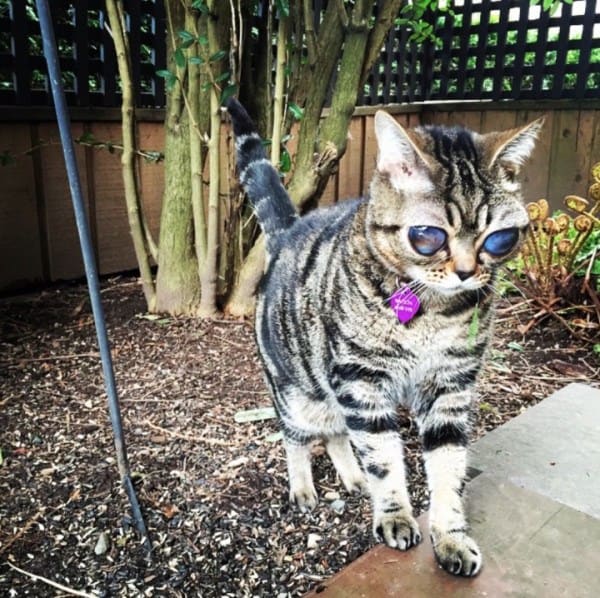 Matilda’s looks are so unique they have made her an Internet Star amazing 34,000 Instagram followers.

Her profile page plays up to her out-of-this-world looks, and reads: “I am a visitor here. Pay attention to me.

“Have you seen anyone else that looks like this? I’m seeking my kind.”

The now-blind moggy is not in pain, according to her website, which explains her life and condition.

It begins: “Matilda lives with her loving servants who include The Bearded Man, The Lady, and Dog.”

After months of fearing for their new kitten, Matilda’s unnamed owners rushed her to various vets when her pupils would regularly enlarge.

However, vets assumed ‘The Lady’ was “crazy”, according to the poorly puss. The website reads: “Searching for answers, The Lady contacted the rescue society that Matilda came from to try and solve the mystery.

“As it turned out, two of Matilda’s littermates had developed a mysterious eye condition.”

“(A) specialist came with her many sophisticated instruments and tests, and confirmed that Matilda displayed signs of spontaneous lens luxation, just like her siblings.”

After much deliberation and weeks of anxiously awaiting test results, Matilda’s ‘servants’ finally succumbed to not putting their kitten through surgery and decided she could be happy and healthy with the condition.

Her loving owners sign off the piece by saying: “No matter what happens, her servants think she’s perfect and beautiful and will love and care for her the absolute best way that they can for however long this little alien is here.”

Cats are stoic. They could take the pain. If the pain becomes unbearable, it will stay very still or howl. The tissues inside the eyes could turn cancerous. Better to remove the eyeballs since the cat is already blind.

BEAUTY: How To Remove Blackheads And Keep Them Gone

Shocking Photo Shows Mexican Woman Giving Birth On...
A Tale of Obsession: Man Lives With Corpse as His ...
HEALTH: Magnesium And Why It Is Important To Your ...
Pregnancy: There is such a special sweetness in b...

Shocking Photo Shows Mexican Woman Giving Birth On...
A Tale of Obsession: Man Lives With Corpse as His ...
HEALTH: Magnesium And Why It Is Important To Your ...
Pregnancy: There is such a special sweetness in b...