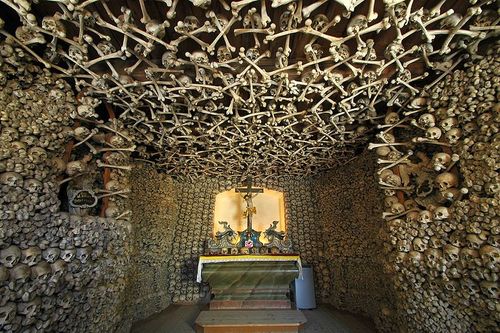 Sedlec Ossuary in the Czech Republic, The Art of Human Remanins

The suburb of Sedlec is a quiet, everyday place, just another part of the small but historic town of Kutná Hora in the Czech Republic. The town has never had a huge population – even today the number of souls there number just over twenty thousand. Yet this calm suburb is home to the Sedlec Ossuary a place which could well send a shiver up your spine. This small chapel under the Cemetery Church of All Saints houses the skeletons of around 70,000 people. And they are not exactly tucked away in a crypt, either. The abbot’s name is Henry and he was sent to Palestine by the King of Bohemia, Otakar II in 1278. In-between conducting his diplomatic tasks there he visited the place known as both Calvary and Golgotha. This is a site just outside the city of Jerusalem’s 1st century walls where it is written that Jesus was crucified. This was, of course, one of the more sacred sites that the abbot could hope to visit and while on his pilgrimage there he collected some earth and reverently placed it in a coffer.

As the abbey gained in popularity so the fortunes of Europe seemed to decline. The mid 1300s saw the Black Death decimate the population. During the next century the Hussite Wars in Bohemia, the first European war in which pistols made a critical contribution, further devastated the communities in the area. The cemetery had to be massively enlarged at this point in its history.

It should be pointed out here that although local poor people would quite likely have been buried here, such was the fame of the graveyard and the pious abbot that many rich people from all over central Europe had their remains transported here in a final deathly pilgrimage. To be buried amid the soil of Calvary was in terms of final resting place one-upmanship, something of a coup. In or around 1400 the church and lower chapel were built, the latter to be used as an ossuary. This was as much of a necessity as it was a desirable addition to the new buildings – the construction of them had unearthed so many skeletons that something had to be done with them. According to the local legend the gruesome task was given to a half-blind monk – perhaps it was considered that the sheer numbers might have been too much for someone fully sighted to take in and retain their sanity.

Further additions were made in the early 18th century in the form of a new entrance and the upper chapel was rebuilt. Then in 1870, František Rint, a local woodcarver and artisan was designated a task – to do something with the heaps of bones. The work was ordered by the Schwarzenbergs, a Bohemian aristocratic family which had been foremost in the area since the 1100s.

Rint took the orders of his overlords to heart, it seems and the somewhat macabre masterpieces you can see here are the results of his gargantuan efforts. In each corner of the chapel is a huge mound of bones shaped like a bell. Skulls, garlanded like flowers, cascade down the height of the vault.

Perhaps the most outlandish example of Rint’s handiwork is the massive bone chandelier which hands from the center of the nave. It is said that the chandelier was built using at least one example of each and every bone in the human body.

The Schwarzenberg coat of arms is also executed in bone – this includes a raven pecking at the severed head of a Turk. The woodcarver committed a final artistic flourish to history – he left his signature, in his medium of choice of course, near the doorway of the chapel. Flowering Trees Photos
The Most Romantic Places in the World
Seven Foods that Flatten your Belly Fat
FESTIVAL: Halloween, Its Significance And The Hall...