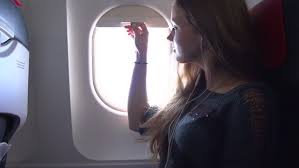 You settle down with your neck pillow, earplugs and eye mask and just when you’re in comfortable snooze mode, a flight attendant taps you on the shoulder and asks you to open your window blind.

While it may be super frustrating at the time, it turns out that there is a pretty serious reason as to why your slumber is interrupted before you land – and it’s not to let you look at the views below .

If you’re afraid of flying, this may be your worst nightmare as according to Tech Insider, cabin crew scramble to let light into the plane right before landing in case there’s an emergency.

“If there’s an emergency, we have to be able to look out the window to assess outside conditions,” one flight attendant told Tech Insider.

“If there is debris, fire, or water blocking the window, we won’t use that exit and will direct people elsewhere.

“It may seem like a small thing, but in an emergency, every second counts. You don’t want to have to fiddle with a window shade when you’re trying to safely evacuate a plane in 90 seconds.”

With only 90 seconds to evacuate in case of an emergency, passengers are often able to alert cabin crew to something wrong on the outside if their blinds are open, meaning there’s more chance of a successful evacuation in such a short space of time.

Airline pilot, Kare Lohse told The Independent: “There have been cases where passengers have noted technical problems by looking out on the wing or engines for instance. Of course, it happens very rarely”.

Passengers are also asked to put away their tray table and straighten their seats so that they can evacuate the plane faster.