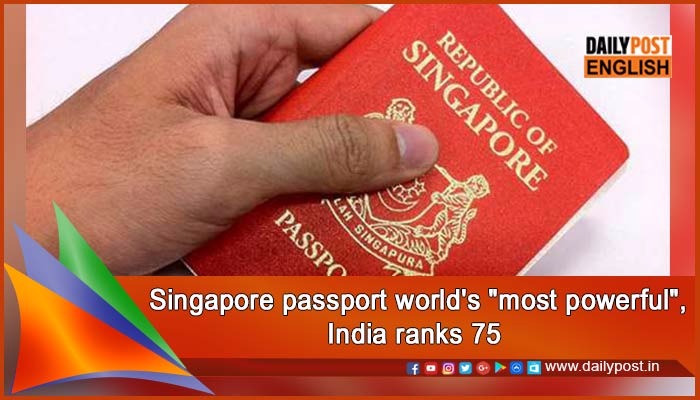 SINGAPORE – Tiny Singapore now has the world’s most powerful passport, according to a new ranking, with its citizens able to travel to the greatest number of countries visa free.

Passport Index, which keeps track of how useable such documents are, said the city-state grabbed the top spot after Paraguay removed restrictions for Singaporeans.

That means the approximately 3.4 million holders of Singaporean passports can now travel to 159 countries either without a visa at all, or can have one issued on arrival.

This marks the first time an Asian country has the most powerful passport, according to the index, which was developed by global advisory firm Arton Capital. “It is a testament of Singapore’s inclusive diplomatic relations and effective foreign policy,” managing director of Arton Capital’s Singapore office Philippe May said of the development.

The index ranks national passports by the cross-border access they bring, assigning a “visa-free score” based on the number of countries a passport holder can visit visa-free, or with a visa on arrival.

Historically, the top 10 most powerful passports in the world tend to be European, with Germany in the lead for the past two years, according to a press statement issued yesterday.

Since early this year, Germany’s No. 1 position had been shared with Singapore, which was steadily moving up the ranks.

Other Asian passports in the top 20 include those of South Korea, Japan and Malaysia.

Germany came in second place, with its citizens able to visit 158 countries without a visa, while Sweden and South Korea tied for third.

The US passport was in sixth place, alongside Malaysia, Ireland and Canada.

Passport Index said the US passport’s usefulness has fallen since President Donald Trump took office, with Turkey and the Central African Republic becoming the most recent countries to revoke their visa-free entry for holders.

Passport Index ranks passports worldwide based on the cross-border access a holder has. It was developed by Canada-based global consultancy Arton Capital.

“More and more people every year invest hundreds of thousands of dollars in a second passport to offer better opportunity and security for their families,” he added.

Singapore was also fourth this year in the Visa Restrictions Index, another ranking of travel freedom, which uses a different method of calculating how “powerful” a passport is. The index says that Singapore passport holders enjoy visa-free access to 173 countries.

“For the first time ever, an Asian country has the most powerful passport in the world,” Philippe May, managing director of Arton Capital’s Singapore office, said in a statement.

“It is a testament of Singapore’s inclusive diplomatic relations and effective foreign policy.” — Agence France-Presse

"When I Look At You" by MILEY CYRUS

God promise strength for the day, comfort for the...
TECHNOLOGY: Samsung smartphone explodes in manR...
Dubai Miracle Garden has the record in Guinness Bo...
Great Chinese Philosopher: Lao Tzu and His Habits ...

God promise strength for the day, comfort for the...
TECHNOLOGY: Samsung smartphone explodes in manR...
Dubai Miracle Garden has the record in Guinness Bo...
Great Chinese Philosopher: Lao Tzu and His Habits ...