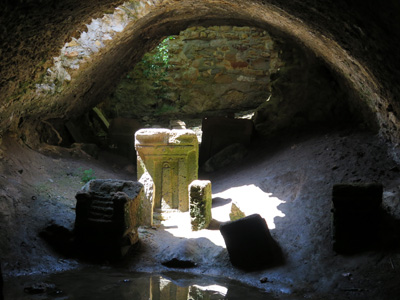 The Sanctuary of Tophet, in Tunisia, consists of an enclosed cave altar and a graveyard where over 20,000 buried urns dating back to the fourth century B.C. have been found, most of them containing the burned remains of children no older than 4 years old.

A depiction on one of the grave markers showing a priest carrying a child has led some historians to believe that the site was used to sacrifice kids to the Carthaginian deities Baal Hammon and his wife, Tanit. The Carthage tophet has no adult graves.  The word tophet comes from the Hebrew topheth derived from “drum” or “place of burning,” an open area for sacrifice. Numerous tophets have been identified in the eastern Mediterranean region. The Tophet of Carthage, excavated between 1920 and 1970, shows burials of young infants, interred in small vaults with beads and amulets, and sometimes the bones of small animals. Low thrones or stones marked the early graves. 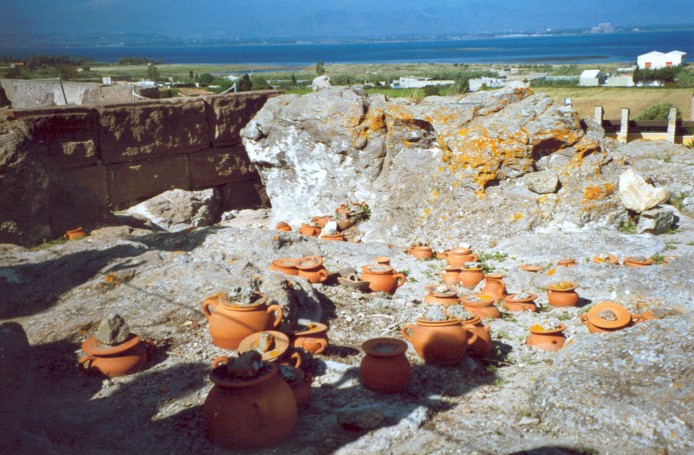 In later periods, buried a layer above the original graves, sandstone markers were covered with stucco and painted yellow, red, or blue. Narrow, limestone grave stelae with pediments appear, inscribed with representations of Baal and Tanit. Many featured the sign of Tanit shown on the stela in the image—a triangle with a disc at the apex and a line through the apex with upturned ends, which looks perhaps like a child or a doll with outstretched arms.

The Tophet of Carthage is a cemetery for infants in the ruins of the North African city of Carthage, now located in a suburb of Tunis. It was once located on the edge of ancient Carthage, which was destroyed by the Romans in 146 BCE. The cemetery is the subject of historical controversy because both ancient texts and archaeological evidence point to the possibility that the children buried in the tophet were child sacrifices. The cemetery was used for over 600 years, between 730 BCE and 146 BCE. Changes in the grave markers and burials indicate three different periods of use. Tophet: tombs of different shape and belonging to different periods some of which show a relief of Tanit, a Carthaginian goddess and of her symbols

Jewish and Christian scriptures refer to places of child sacrifice. Roman writer Diodorus Siculus described the sacrifice of upper class children to the deity Baal in 310 BCE, a reference seen as the main source of the claim of child sacrifice. Later elaborations made by writers even into the 19th century include the description of a metal fire pit in the form of the deity, with grates that mechanically tipped infants into the fire. Sacrifices to appease the deities or to ask favors seem to be supported by some inscriptions, but not everyone believes them, though. Some maintain that it’s all ancient libel, and that the Tophet is merely a resting place for children that have died naturally … and were then cremated … and number in the tens of thousands. There may also be evidence that small animals were sacrificed in place of the children.

On the other side of the controversy are claims that the archaeological evidence is too sparse and inconclusive, and the texts may have been written out of ulterior motives, especially in view of Rome’s wars with Carthage. No other classical sources mention the practice, and biblical references do not mention the tophet of Carthage.

The excavated Tophet of Sulcis at Sant’Antioco in Sardinia. Photo: Josephine Quinn.

There is also evidence that children’s burial grounds were merely separated from adult cemeteries as well as pictorial evidence that the graves were regularly kept and supplied with offerings. The fact that burials were sometimes massed, and that some graves contain more than one child, may be evidence of disease epidemics as the population of Carthage grew. The inscriptions that refer to gifts and offerings may refer to sacrifice, or may refer to the hope of regeneration or fertility to the family who lost the child, meanings included in concepts surrounding both Tanit and Baal as deities.

In the last few years, Tunisia has strongly favored the non-sacrifice theory to help promote tourism to their ancient … burned child … graveyard (best of luck with the brochures, guys). But if they were really serious about putting a more positive spin on the Sanctuary, the first step would probably be to rename it to something besides “Tophet,” which has come to mean, among other things, “hell.” See You Again Lyrics by Wis Khalifa Honorin Paul W...
Pervert: School Is Hard And So Is Your Math Teache...
Parenting and Child Health – Health Topics &...
How to learn! The Best Method To Success