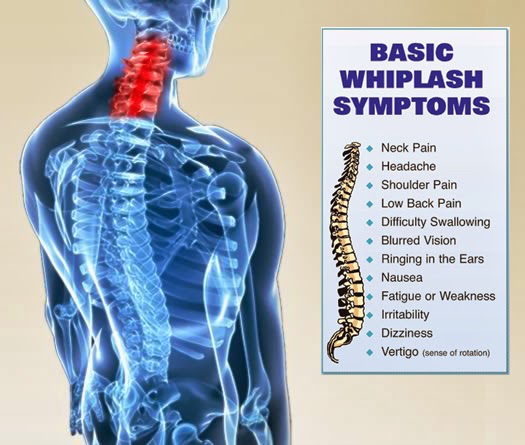 By definition, a neck strain is not a serious injury. However, the pain and dysfunction that it causes can be significant. This article reviews both first aid approaches to alleviate the pain, as well as signs and symptoms that indicate when to see a doctor. 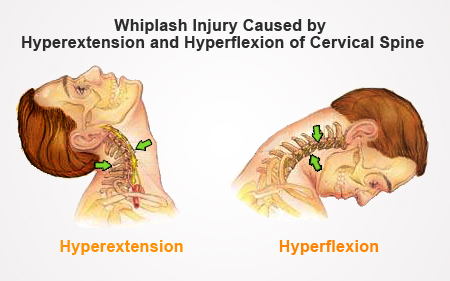 Whiplash Whiplash is a nonmedical term used to describe neck pain following an injury to the soft tissues of your neck (specifically ligaments, tendons, and muscles)

Neck strain is often just called whiplash. Although it’s usually associated with car accidents, any impact or blow that causes your head to jerk forward or backward can cause neck strain. The sudden force stretches and tears the muscles and tendons in your neck.

However, the differences between these strains and sprains probably won’t mean much to you. The causes, symptoms, and treatment of neck sprains and neck strains are usually the same.

Neck strain is injury to the muscles and tendons that support and move the head and neck. The neck is susceptible to injury because it is capable of extensive range of motion. It is, as a result, less stable that many other body areas. In addition, the neck muscles are affected by the motion of nearly all other areas of the body. 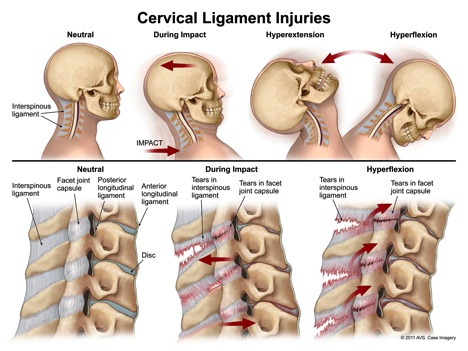 The neck contains many vital anatomic structures, the most critical being the airway (breathing tube), the spinal cord, and the blood vessels that supply the brain. Neck strain injuries do not typically involve serious injury to any of these vital structures. Neck strain is also not usually associated with fractures or dislocations of any of the bones of the cervical spine, but injury to all of these tissues can occur with the most severe trauma.

Injuries of tissues that contract and move, such as muscles and tendons, are termed strains. Similar injuries to nonmoving structures, such as ligaments, joint capsules, nerves, bursae, blood vessels, and cartilage, are termed sprains. Both strains and sprains of the neck may involve tears to ligaments covering the cervical vertebrae of the spine, the many muscles of the neck (which move the head), and many other associated structures. They may also result in injury to cervical nerves caused by stretching or compression.

The neck is an area where stability has been sacrificed for mobility, making it particularly vulnerable to injury. Because one can be injured in a number of different ways, a detailed medical and job history (including an analysis of work activity) is often needed to fully evaluate a neck injury. It also helps to predict how long one’s recovery will take and what the prognosis will be following an injury.

What Are the Symptoms of Whiplash?

The pain of whiplash is often hard to ignore. The symptoms may include:

Triggers for the onset of neck muscle strain can be traced to several common activities that strain the neck anatomy, such as:

Sometimes, the pain of a neck strain is immediate. In other cases, it can take several hours or days before your neck begins to hurt.

Most episodes of neck muscle strain (or other soft tissue strain or sprain, such as ligaments or tendons) result in a stiff neck and/or pain in a shoulder muscle. Symptoms typically include difficulty and pain when moving or rotating the head or neck.

The blow that causes neck strain can sometimes cause a concussion, too. Since concussions can be serious, you need to see a doctor right away. You need emergency medical care if you are confused, dizzy, nauseous, excessively sleepy, or unconscious.

To diagnose neck strain, your doctor will give you a thorough examination. You may also need X-rays, CT (computed tomography) scans, and other tests, to rule out other problems.

Given time, whiplash should heal on its own, there are many self-care remedies that are effective in alleviating the pain and stiffness. To help with recovery, you should:

When to See a Doctor for Neck Strain

When Should I See a Doctor for Treatment?

For more severe pain and stiffness, if the symptoms last for more than a day or two, or if the pain is accompanied by arm pain, numbness or tingling, a visit to a health professional, such as a chiropractor or primary care physician, is generally advisable.

Also if the symptoms started after any kind of trauma or accident it is a good idea to get a full examination from a health professional to diagnose or rule out any serious problems.

For most episodes of neck pain, self-care and avoiding any additional strain to the neck will usually suffice to manage the symptoms until the strain is healed.