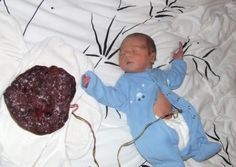 Birth is undeniably a beautiful experience, but apparently it can also be extremely bizarre. Here are some of the strangest birth customs from around the world that will probably make you cringe if you’re pregnant: A lotus birth is the practice of leaving the umbilical cord uncut and attached to the baby after birth. The baby typically remains attached to the placenta for about three to ten days until the cord naturally separates from the belly button. There are generally two schools of thought when approaching the idea of a lotus birth. Those who are proponents of “natural” birth that do not take place in hospitals or with medical intervention. This camp argues that lotus birth is returning the to the natural way of things and that leaving the cord attached aids the baby both mentally and emotionally as well as providing physical benefits. The second school of thought is against leaving the cord attached. It is thought that clamping the cord helps to increase the arterial blood pressure in neonatal circulation, which means blood flow to critical structures like the heart and brain are increased. Doctors also believe that leaving the placenta for a time after birth can increase the risk of infection in the placenta which could spread to the baby. Jamaica is known for its beautiful beaches and one of a kind people, and there aren’t many people on the planet that are not familiar with reggae superstar and activist Bob Marley who hails from this vacationer’s dream. However, most folks are not knowledgeable on childbirth practices concerning the placenta from some of Jamaica’s population.

Eating the placenta has become an increasingly trendy thing for new moms to do after the birth of their child, especially among US celebrities. January Jones, Kim and Kourtney Kardashian, Alicia Silverstone, and Tia Mowdery are a few well-known stars who are proud to admit their cannibalism trial run. In Jamaica, new moms place bits of the placental membrane into a special tea and feed it to their newborns! They do this to prevent convulsions said to be caused by ghosts. In Japanese culture the umbilical cord is very important. It’s valuable to the point that Japanese mothers keep it in a beautiful box called the Kotobuki Bako. Legend has it that this custom started when a woman in ancient times wanted a special object to serve as a memento for giving birth. Inside the Kotobuki Bako is a small doll wearing a kimono that symbolizes the mother’s baby. Often the cord is kept inside the kimono. 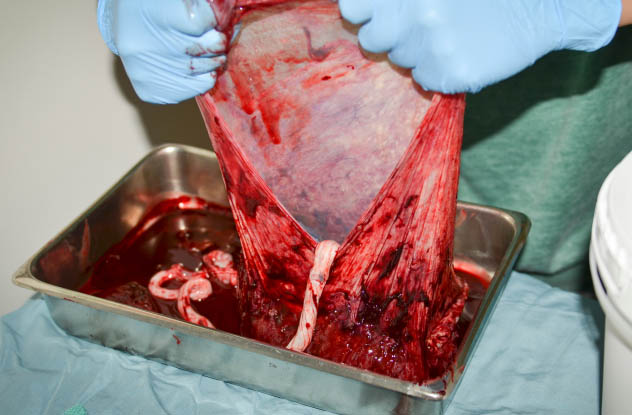 The habit of eating the placenta by the mother, after the baby’s birth, is found in the animal kingdom but don’t worry humans are not too far in this. In some parts of India, Jamaica and China, eating the placenta is recommended as a traditional medicine. It sounds primitive, right? Though unbelievable it may sound but some medical practitioners consider placenta beneficial helping the mothers with postnatal depression. However scientists have voiced doubts regarding this. It is highly unlikely that eating of placenta is going to become a fashion any time soon, because one cannot eat it raw due to the sheer overwhelming number of bacterias residing in it and cooking will most likely destroy all its beneficial nutrients.

Surely you have heard this quote several times: “Every man should plant a tree, have a child, and write a book.” In Jamaica, apparently parents only need to write a book, since the rest is already done!

According to Jamaican tradition, after the mother gives birth, the afterbirth and cord are buried in a special location and a tree is planted on that spot. The tree is provided by parents, godparents, or other relatives and friends. The tree is a pedagogical tool which teaches the child to take responsibility in life, since it is used to show the child that this the beginning of his life and he must take care of it.

This tradition comes from a Jamaican expression that says, “Home is where your navel string is buried,” symbolizing a spiritual attachment to the place from which every human being came.

Burying of placenta in Bali, Indonesia

The first and most important of these ceremonies involves the ari ari, or placenta. This is carefully saved after the birth at the hospital and is buried outside the parent’s home in the family compound with a stone placed on top. As you enter someone’s home, you’ll see stones for girls on the right and boys on the left. Every day, special offerings are placed on this stone. When the baby is small, the stone is washed with the baby’s bath water and given small oleh oleh, gifts of cake from wherever the parents have been outside the house that day.

The baby’s umbilical cord stump is kept in a new plankiran, wooden shrine, after it falls off. It’s believed if the baby falls ill, drinking tea made with this will cure any serious illness. Mothers in the Kalash province of Pakistan are also known to give birth alone, even without any assistance from their families. But unlike in Nigeria, these poor mothers are kept separate because culturally woman in labour is considered unclean or polluted so they are shifted to an isolated place called Basleni. The extent of this, highly patriarchal and dogmatic culture is so that the only women allowed to assist the suffering mother are those who are menstruating, for menstruation is considered foul too.

There’s no assistance for the Nigerian mothers Throughout Nigeria, it is expected that mothers give birth to their little bundles of joy without any assistance at all. Although midwives are often around, they should only enter the delivery room once the mother has gone through the birth alone. Unlike the other bizarre birth customs, which have developed due to spirituality and superstition, this particular tradition is the result of poverty and a lack of respect for women in the society. More often than not families begrudge asking for help and so miscarriages and other complications are a huge risk. 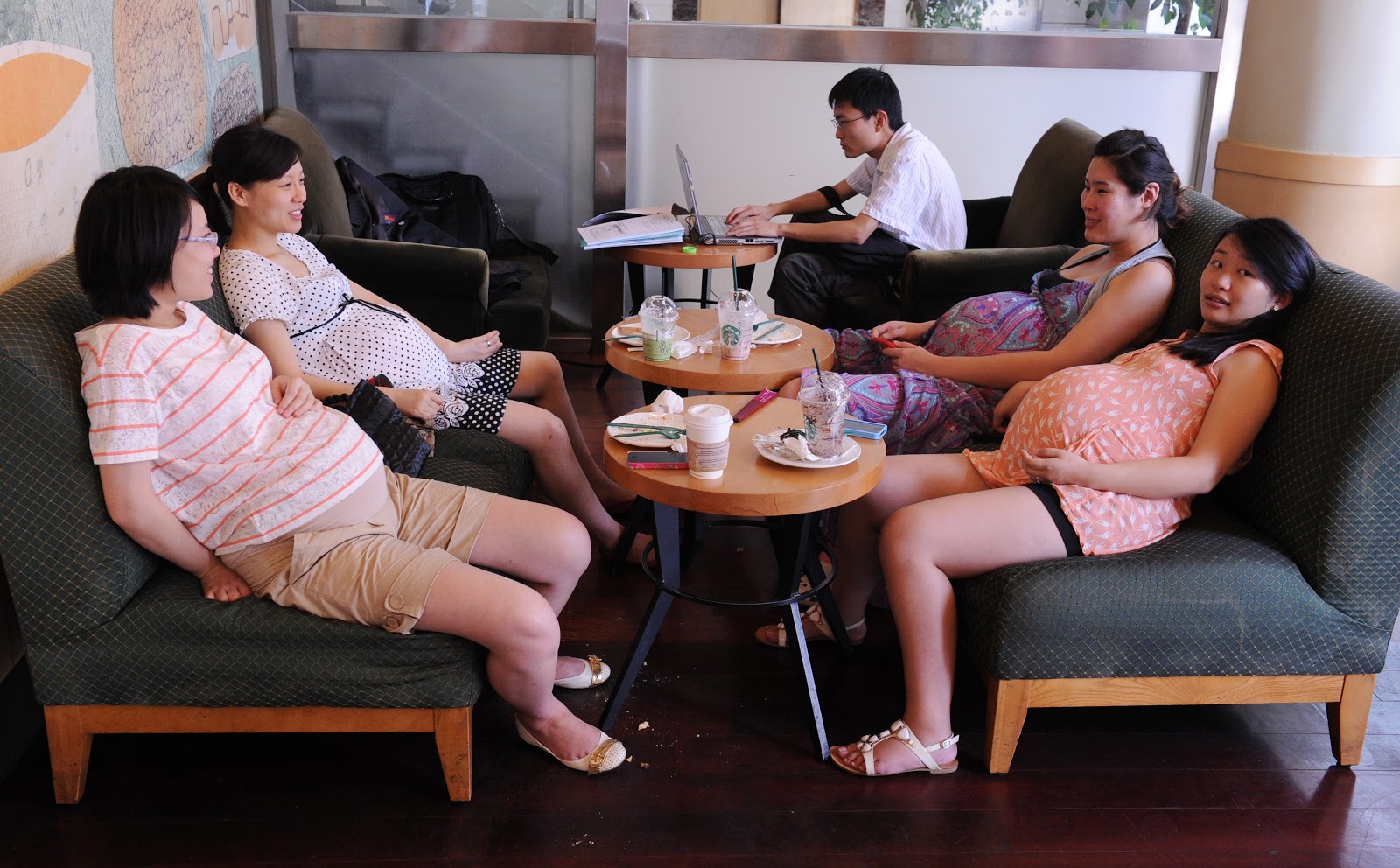 These Chinese birth customs may seem a bit more normal compared to that last section, but they’re still quite odd. When a Chinese couple is married, the husband must carry his wife across burning coals into their new home to ensure she can give birth with ease. Once the woman does get pregnant, she’s banned from doing all sorts of odd things. She must not gossip. She must not laugh loudly. She must not look at colours that clash. She must not eat dark food. She must not sit on a crooked mat. She must not have sex. So what must she do? Well, she must sleep with a knife under her bed to deter bad spirits. Obviously.

In Chinese families, when a baby turns one month old the Full Moon ceremony is held to commemorate the first full month of life. This is the first important event for the newborn child.

On the morning of the baby’s 30th day, relatives and friends gather to give their blessings and gifts to the new baby. The baby’s parents also give presents to their relatives and friends. The types of gifts vary from place to place, but eggs dyed red are usually the most popular gift, probably because in Chinese culture eggs are a symbol of the changing process of life. Their round shape is the symbol of a harmonious and happy life, while the red color is a sign of happiness.

During the celebration, relatives and friends also give gifts. Grandparents usually give their grandchild gold or silverware to show their deep love. Of course, parents and the newborn receive modern gifts too, such as baby clothes, toys, books, and gift vouchers, but the most common is money wrapped in a piece of red paper. In other words, it’s like a Western baby shower, but it’s celebrated a month later! 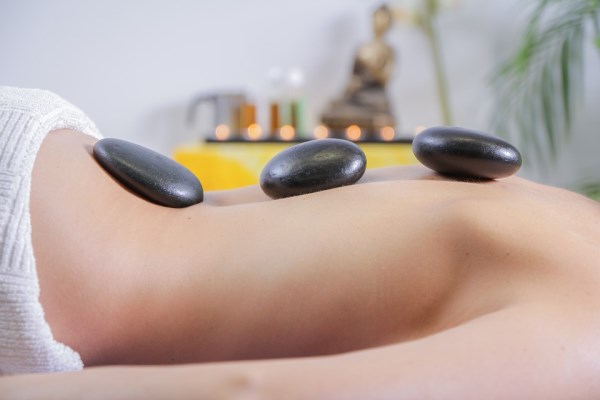 After reading this article, every new mom will want to go to Malaysia for a postpartum treatment. So, let me explain this spectacular Malaysian tradition.

After delivering her baby, a new Malay mother undergoes a pantang, or confinement period lasting about 44 days, which is designed to preserve the health and femininity of the mother. She then receives hot stone massages to cleanse the womb and a full-body exfoliation treatment said to smooth, soften, and lighten the skin, chasing away postpartum body changes.

New moms are not allowed to lift heavy things or do anything apart from nursing the baby. All of the house chores fall to the husband, relatives who volunteer, or hired helper.

Even though Kisii women in Kenya are very much engaged with their children, they turn their eyes away as soon as their babies get the slightest bit excited. It is their way of teaching a child not to seek too much attention.

Photos of Jungle Justice: JUNGLE JUSTICE IS NO JUS...
QUOTES: A TOUCH OF LIFE
PHOTOGRAPHY: Iconic Photos of Celebreties
HEALTH: EASY STRETCHES TO RELEASE LOWER BACK AND H...

In this lovely night,I pray to the blue moon to protect you through the nite, the wind ....

Love is the Passage of Every Soul
QUOTES: Don’t Let Negativity Ruin Your Day
BEAUTY AND FASHION: Then and Now African Hairstyle...
People: 10 Rarest and Weird Historical Photos of M...

Love is the Passage of Every Soul
QUOTES: Don’t Let Negativity Ruin Your Day
BEAUTY AND FASHION: Then and Now African Hairstyle...
People: 10 Rarest and Weird Historical Photos of M...