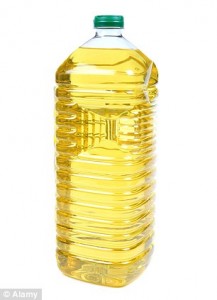 Swapping to vegetable oils and nuts may increase a man’s chances of surviving prostate cancer.

Heart-healthy: Using vegetable oil instead of animal fats could slow down the spread of prostate cancer

A study found that those diagnosed with the disease early had a lower risk of the cancer spreading if they replaced animal fats found in processed foods – such as cake and pastries – with healthy vegetable fats.

One serving of oil-based salad dressing a day, equivalent to one tablespoon, was linked with a 29 per cent lower risk of potentially lethal prostate cancer and a 13 per cent lower chance of dying from any cause.

The US authors stressed the research involving 4,577 prostate cancer patients had revealed an association and could not necessarily prove a diet rich in oils and nuts was the cause.

In an online paper published by the journal JAMA Internal Medicine, they wrote: ‘Overall, our findings support counselling men with prostate cancer to follow a heart-healthy diet in which carbohydrate calories are replaced with unsaturated oils and nuts to reduce the risk of all-cause mortality.’

Of the men with prostate cancer enrolled into the study, around a fifth died from the disease over a period of about eight years. Another 31 per cent died from heart disease and almost 21 per cent from other cancers.

At the time they were recruited, all the men had non-metastatic prostate cancer, meaning the disease had not yet spread.

Information about the patients’ dietary habits was collected from questionnaires.

Swapping animal fats and carbohydrates for healthy vegetable fats, including olive and canola oil as well as oils from nuts, seeds and avocados, was found to have a significant impact on disease progression and death. 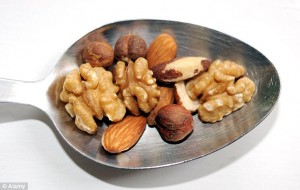 The study found oils from nuts, seeds and avocados were found to have a significant impact on disease progression and death

Men who replaced 10 per cent of their daily carbohydrate consumption with vegetable fats had a 29 per cent lower risk of developing deadly prostate cancer and a 26 per cent reduced risk of dying from any cause.

Dr Erin Richman, from the University of California at San Francisco, said: ‘Consumption of healthy oils and nuts increases plasma (blood) antioxidants and reduces insulin and inflammation, which may deter prostate cancer progression.’

PEOPLE: The ‘Commoners’ Married Into A...
Signs of Abusive Relationship
Passionflower and Passion Fruit: Natural Herbal Re...
QUOTE: G0D’S POET IS SILENCE

Nation: The Innocent, The Bomb, The Horror of War

10 Superstitious Beliefs of Filipinos That Influence Their Life

HEALTH: Eating Nuts And Stomach Discomfort
Worst Parenting Fails
Love someone not only for what he/she is, but for...
UNDERSTANDING NORTH KOREA KIM JONG-UN, THE WORLD’S...

HEALTH: Eating Nuts And Stomach Discomfort
Worst Parenting Fails
Love someone not only for what he/she is, but for...
UNDERSTANDING NORTH KOREA KIM JONG-UN, THE WORLD’S...