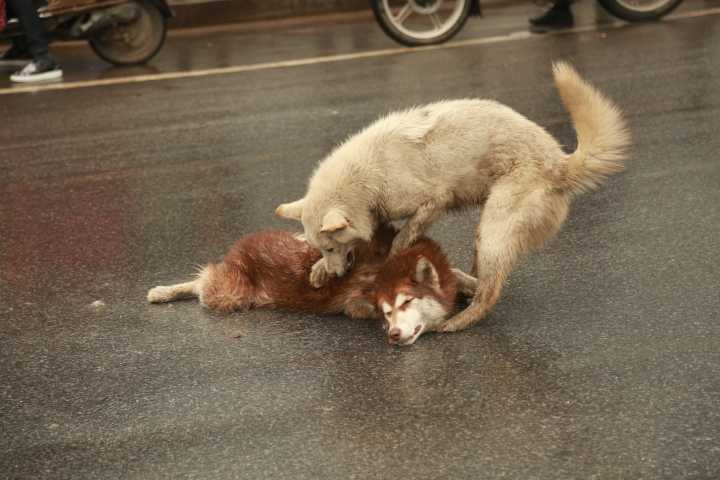 Heart-breaking pictures have emerged showing how a loyal dog guarded its dead friend hit and killed by a car and even tried to wake it up on a busy road in China. The cream-coloured dog pawed and barked at the lifeless body of its dead friend in China source Daily Mail.Co.Uk

Heart-breaking pictures have emerged showing how a loyal dog guarded its dead friend and even tried to wake it up on a busy road in China. Don’t leave me! The dog was trying to wake up its friend which had been killed by a car. Source: Daily Mail.Co.UK

According to a report from Huanqui.com, an affiliation to People’s Daily Online, the tragic incident took place at Nianli town of Quzhou city yesterday.

The husky can be seen lying motionlessly on the road, while its cream-coloured friend stood guard over the body for at least half an hour.

The cream-coloured dog desperately pawed the husky’s lifeless body in a bid to revive its life.

Video footage shared by Pear Video shows the saddened pooch attempting to wake up the dead dog. It mourned its friend’s death on the road where cars drove past constantly.

A few onlookers gathered at the side of the road, however, none of them was able to explain the cause of the traffic accident. The dog stayed at its friend’s side for about half an hour until their owner came to pick them up Source Daily Online.Co.Uk

About half an hour later, a woman in black dress came and called the husky’s name.

An on-duty policeman asked her: ‘Are you the owner of the dogs?’ Throughout the entire ordeal, the cream-colored husky never left the side of its deceased companion.

The cream-coloured dog followed its dead friend as the owner took it to the side of the road and called for assistance.

Animals have their own social relations. Just like humans, they’re capable of feeling emotions like grief, pain, and joy. They can also form deep friendships, and they too mourn just like humans do when they lose the ones closest to them. Source: NTD.tv

The link between humans and animals may be closer than we may have realised. Research by Liverpool John Moores University (LJMU) has found that our furry relatives may share many of the same emotions that humans experience in everyday life.

Dr Filippo Aureli, reader in Animal Behaviour and co-director of the Research Centre in Evolutionary Anthropology and Palaeoecology at LJMU will present his findings today (September 6) at the BA Festival of Science in Dublin.

He explains: “My research has shown that emotion is a valid topic for scientific investigation in animals and helps us to understand how animals behave with great flexibility.

“For example self directed behaviours, such as scratch -grooming, obviously have a hygiene function, but they also reflect motivational ambivalence or frustration.

“Recent research has shown that there is an increase in such behaviour in situations of uncertainty, social tension, or impending danger. The same can be shown in humans who may bite their nails or pull at their hair in times of anxiety.”

Animals respond to the environment much as humans do, reacting emotionally to others and even becoming stressed and anxious in times of danger. These emotions have a marked effect on their behaviour but while researchers may never be able to know how animals actually feel, studies have found that there are definite behavioural similarities in emotional expression between animals and humans.

Studying animals is helping researchers, such as Dr Aureli, to understand more about the phenomena of emotions. Though animals cannot express their feelings linguistically, researchers have found that like humans, their emotions can be expressed through actions.

Individual primates behave in different ways depending on the circumstances they find themselves in and the group members they interact with. For example, individuals who spend more time in proximity to one another will generally be friendlier and less aggressive to each other – showing that the animals form close bonds with some group members.

Dr Aureli explains: “Monkeys and apes behave as if they take into account the quality of social relationships, for example whether they are friends or non-friends. Emotion can mediate the assessment of one’s own relationships and guide animals’ decisions on how to interact with different partners under different circumstances.”

Dr Aureli’s work has also shown that primates behave as if they discriminate between the qualities of relationships of other individuals. For example, following an aggressive interaction between two animals, a monkey may attack individuals related to the antagonist, or invite close associates to support it in overcoming the aggressor. This further relates to human behaviour, where some humans will protect one another and act on their behalf if a friend is threatened or bullied.

Dr Aureli says: “Emotional mediation can also be used to gather information about the relationships between other group members and guide decisions about how to interact in complex situations involving multiple partners. The framework of emotional mediation of social relationships could be particularly useful to explain social interaction when members of a society are not always together.”

He explains that this is what happens in humans living in small villages. Everyone knows one another by sight or name, but the entire community is rarely all together and individuals spend most of their time in smaller sub-groups which meet, merge and divide with different composition.
Communities with similar characteristics have been found in chimpanzees and spider monkeys.

Dr Aureli adds: “The study of animal emotions provides powerful tools to better understand the regulation of social relationships in various social systems and the evolution of the human social cognition.

Dr Aureli presents his research as part of BA Festival f Science session on ‘Primate Social Cognition: What monkeys know and feel about each other’. The session will focus on the use of innovative perspectives to investigate cognition, in the absence of language, which may be applicable to the study of humans.

To Be Happy is One Way of Being Wise
PEOPLE: American And Filipino Female Celebrities W...
A Tale of Obsession: Man Lives With Corpse as His ...
VIRAL ANIMAL: Cats With Strange OCTOPUS LIKE FUR

Ashgabat,Turkmenistan: The City of White Marble and The Seventh Least Visited Country in the World