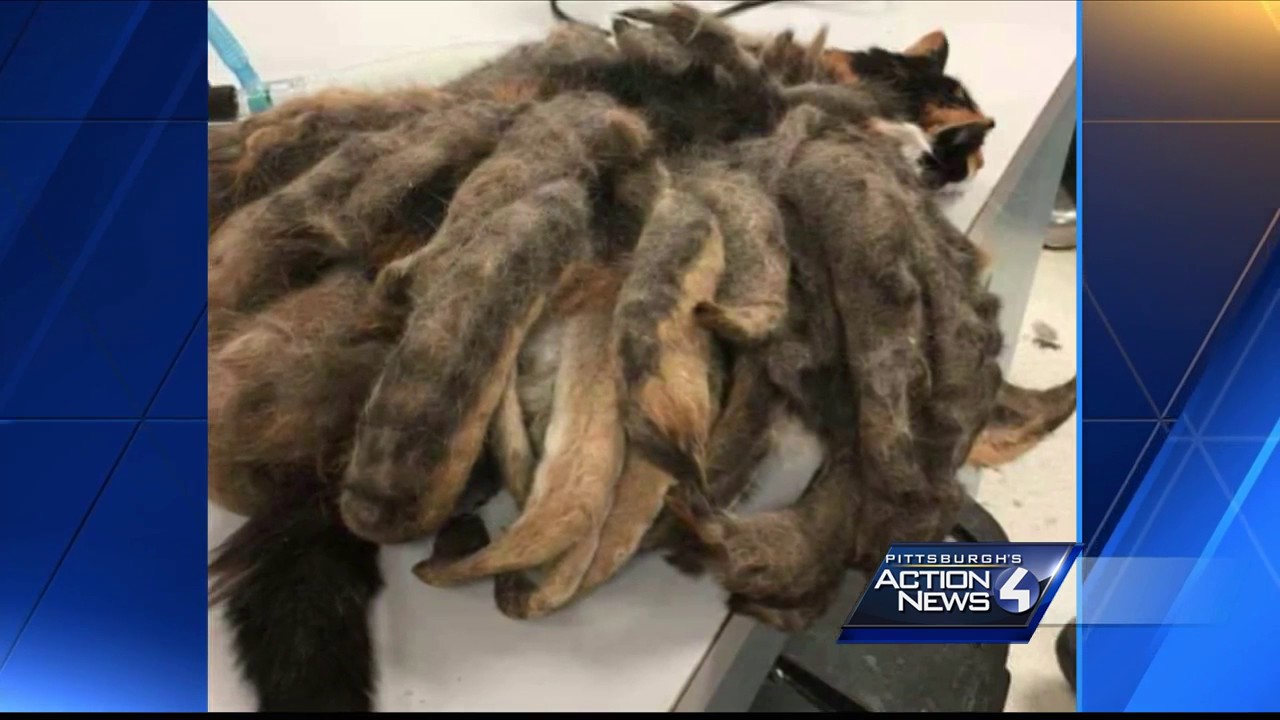 After a haircut, she’s feeling much better.

Everyone can relate to having a bad hair day. A cat named Hidey knows all about it.

Hidey’s bad hair day probably lasted for years. When people found her, she had 2 pounds of matted fur on her back – about the weight of a pineapple or a small bag of rice.

An elderly man in Pittsburgh, Pennsylvania, owned Hidey, as well as a Siamese cat named Siam. The man had Alzheimer’s disease, and when he’d gotten too ill to live by himself, his family moved him to a nursing home. The cats, unfortunately, got left behind.

Paul Russel, a distant relative of the elderly man, was the first to think of the cats. Well, really, one cat.

“When they put him in the nursing home, I thought, ‘Hey, he has a cat,'” Russel told The Dodo. “The house was still open, so I went down and left some food for the cat until we figured out what we’re going to do. Then somebody mentioned that he had a second cat. So I started searching around, and suddenly this huge creature darts out from under the bed and runs down to the cellar, and I thought, ‘What was that?'”

Hidey’s fur was so matted that dreadlocks had formed. “At first I thought it was a cat who had a blanket draped over her that she dragged down,” Russel said. “But no – it turned out to be Hidey. She hid down in the corner of the cellar. I’m down there with a flashlight looking – it was almost like a horror movie. And I found her hunkering in the corner. Probably very scared. Probably in a lot of pain.”

Russel took Hidey (so named for her inclination to hide) to the Animal Rescue League and Wildlife Shelter in Pittsburgh, which will is affiliated with the Western PA Humane Society.

The vet team was stunned at Hidey’s appearance. “They hadn’t seen anything like that,” Caitlin Lasky, senior marketing communications manager for Western PA Humane Society, told The Dodo. “Even looking online, I had a hard time finding anything similar, so it’s definitely a unique case.”

The vet team had to put Hidey under general anesthesia so they could safely shave off her dreadlocks. “It was 2 pounds of fur,” Lasky said. “Lots of fur. It had to be years of matting for it to get that long. She was overweight as well.”

While no one knows exactly how Hidey’s fur got this bad, the vet team thinks her weight had a lot to do with it. “Hidey was really overweight, so that makes it harder for [cats] to groom themselves, and that’s when you see matting happen,” Lasky explained.

It also helps to regularly brush cats with long fur, which the elderly man was likely unable to do.

Since Hidey was discharged from the vet hospital, she’s been staying with Russel and his family, and she’s already feeling better.

13-year-old Cat is So Thankful to Be Free from Mountain of Knotted Fur He Can’t Stop Cuddling. 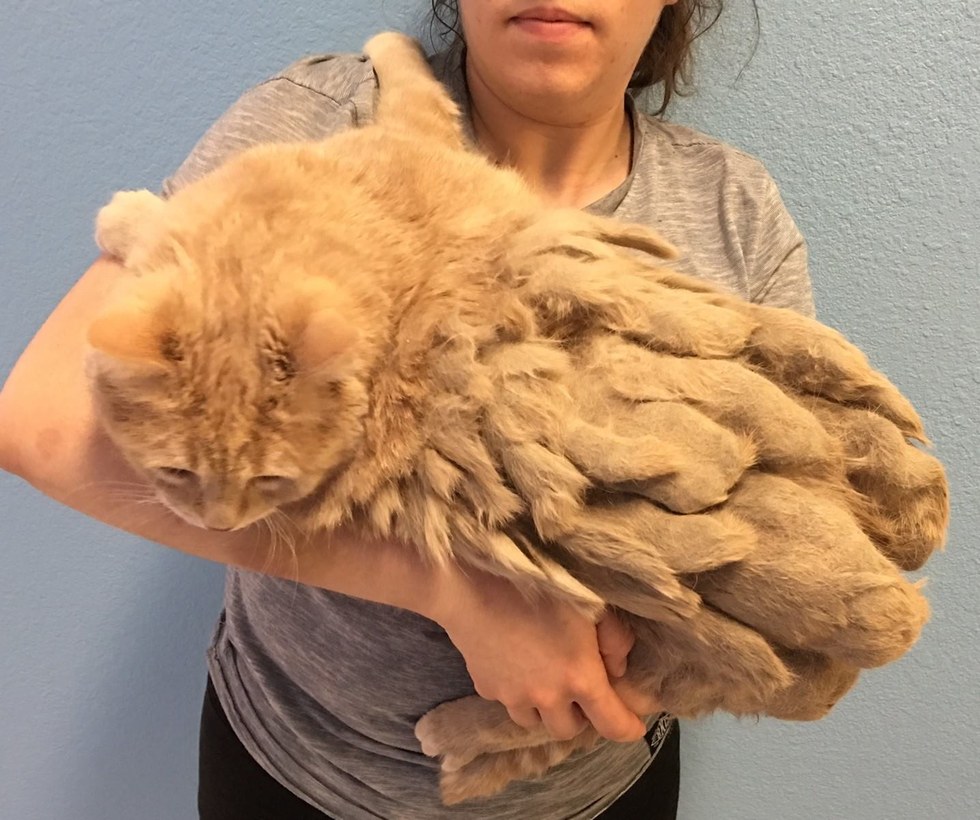 This sweet senior cat had been carrying an unthinkable amount of matted fur on his back for a long time. For many years, the ginger feline had been living a stray life wandering around the neighborhood without a roof over his head.

His previous owners let him roam outside, and when they moved out, Buttercup was left behind. Neighbors gave him food and kept him fed, but the cat never received help to remove the knotted fur until a good Samaritan who spotted him last Thursday and brought him to the Nevada SPCA.

“This docile boy, 13 years of age and 24 pounds in weight, was suffering from some of the most severe matting on a feline that we have seen in years,” Nevada SPCA said.

Getting rid of all the mats wasn’t easy for Buttercup, but he was such a champ. “It took hours to shave him. I believe they had to take many breaks to reduce the stress,” Ellen Richter, volunteer of Nevada SPCA, told Love Meow.

It was an emotional process to shave off all the mats and knots. Many staff members that were there, couldn’t hold back their tears, knowing what Buttercup had endured all these years.The ginger boy held onto his caretaker while they were helping him get the much-needed relief. He was the sweetest he could be, “and let them shave away years of accumulated knots and giants matted folds.”

“His skin was horrible and dry. They applied oils and lotions to help heal and soothe,” Ellen told Love Meow. 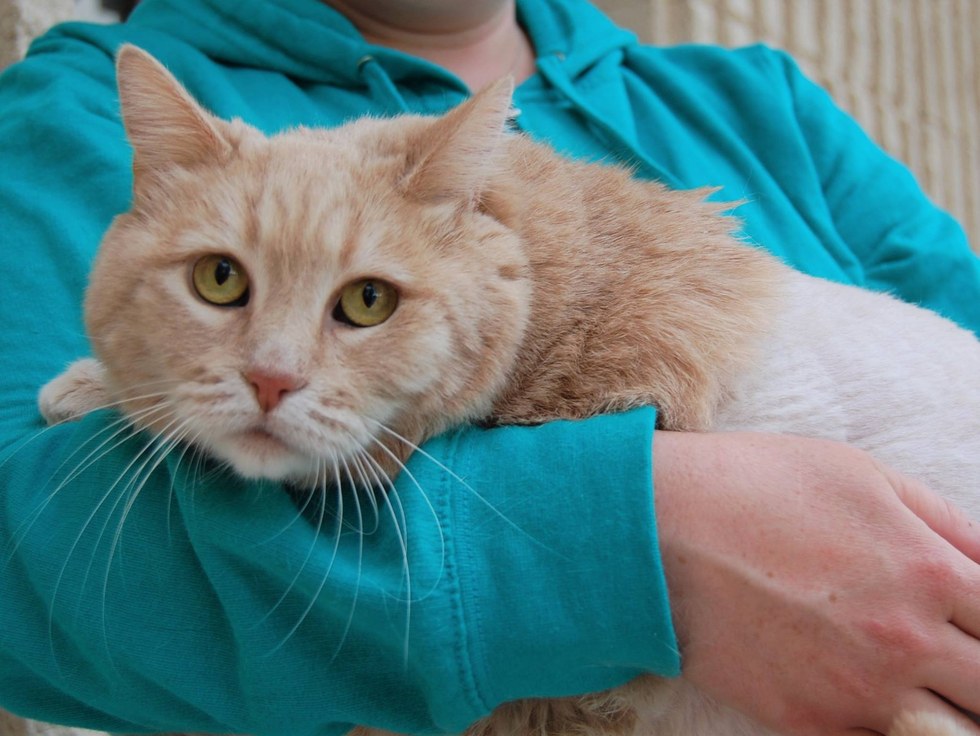 To help with his skin, they put the kitty on a diet with premium food and continue treating his skin daily with special oils. Buttercup is making incredible improvement every day.

“Buttercup loves being held in gentle arms or cuddling up in cozy cat beds. He is great with other sweet cats. Please share his post to help him finally know and experience what a loving and responsible home feels like, at long, long last.” 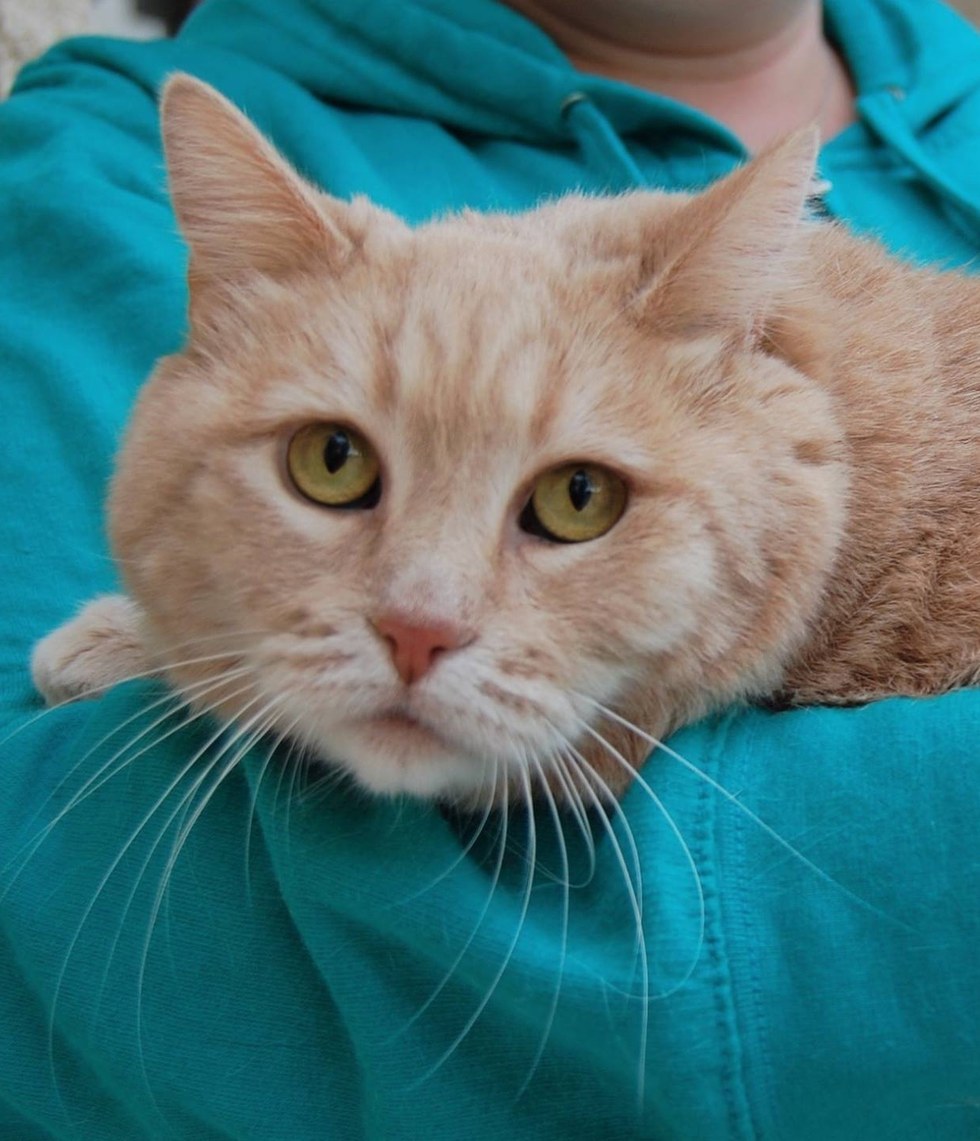 UNUSUAL: Weird and Bizarre Baby Customs From Aroun...
A Journey of a Lifetime
Travel: The 10 Best Infinity Pools in the World
Odd or Artist: Self Inflicted Freak