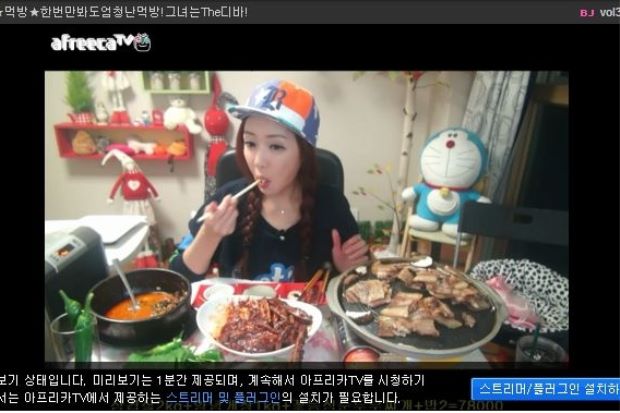 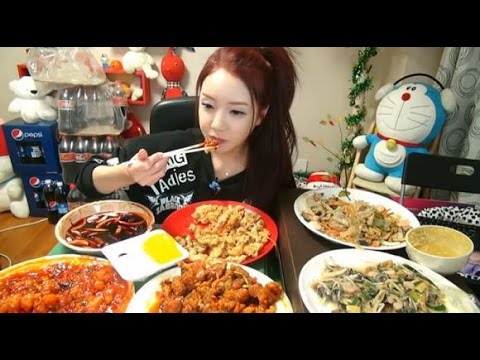 The Diplomat: People who dine in front of a webcam can make more than $9,000 a month.

In Korea, where a quarter of households are occupied by one person, live-streams of solo diners to thousands of people have become a hit among those who want a dinnertime companion – even if it’s through a computer screen.

“My fans tell me that they really love watching me eat because I do so with so much gusto and make everything look so delicious,” said Park Seo-Yeon, a 33-year-old meok-bang star who is known as “The Diva” to her fans.

For appearance-conscious South Korea, the broadcasts are an outlet for the weight conscious. Although Park’s impressive metabolism would seem likely to make her the envy of many, some of her biggest fans are, in fact, female.Park, who quit her daytime job at a consultancy agency to focus on her nighttime feasts, claims that she makes over $9,300 a month. Afreeca TV, the social networking website that hosts the channel, allows users to buy virtual tokens called “star balloons” that can be sent to other users and converted into cash. A third of her income is spent on purchasing food for her show. Park can easily polish off four large pizzas or three kilograms of beef in just one broadcast.

“People enjoy the vicarious pleasure when they can’t eat this much or find that food at night or are on a diet,” Park Seo-yeon told Reuters before one of her scheduled shows.

Some attribute this recent online trend to the breakdown of old social ties. Research papers from the Organization for Economic Cooperation and Development show that one-person households are projected to increase from 25.3 percent of the total in 2012 to 32.7 percent in 2030. Koreans are also known to dislike eating by themselves.

“For Koreans, eating is an extremely social, communal activity, which is why even the Korean word ‘family’ means ‘those who eat together,’” said Professor Sung-hee Park of Ewha University’s Division of Media Studies.

Without a companion to enjoy dinner with, some find comfort in watching The Diva eat and answer questions from viewers.

“It feels as if I am the one eating that much,” said Park Sun-young, a 26-year-old fan of The Diva’s broadcasts. “It is comforting for people who eat alone.”

Toss in a small-boned, attractive woman with a bottomless pit of a stomach and the appetite of a football quarterback and you get “meok-bang”, the latest online fad to hit the web in South Korea, in which viewers tune in to regular people eating obscene amounts of food for hours, reports Kotaku, a gaming website that also tracks digital trends in Asia.

The word “meok-bang” is a mash-up of the Korean words for eating (meok-guh) and broadcast (bang song).

Heading the trend is a woman known as The Diva, a perky, young South Korean who works at a consulting agency by day, and turns into a “broadcast jockey” at night, shovelling an impressively large amount of foods into her stomach, says Kotaku.

In one sitting, she’ll throw back 35 eggs, a box of crab legs, or five packs of instant noodles.

Streamed on a peer-to-peer online video network called Afreeca TV, the medium allows viewers to make donations to their favourite online personalities by way of a virtual currency called Star Balloons, that can be turned into real-world money.

And it’s thanks to the crowd-sourced funding that The Diva has been able to subsidise her incredible eating habits, which cost her about US$3,000 (RM9,798) a month, Kotaku reports.

Since beginning her show, The Diva says she’s put on 9kg – minimal given the thousands of calories consumed every night. Her marathon eating sessions will begin at around 8pm and last for around two hours.

And to answer allegations of purging, The Diva will also sit around answering fan questions and discussing food for another two hours after her meal, to allow the food to digest.

Meanwhile, social commentators and pundits theorise that the popularity of these marathon eating shows are more than just a strange fascination with pretty people eating, but the desire not to eat alone.

Writes Kotaku: “Watching The Diva’s broadcasts is a bit like going to dinner with someone – and bringing the entire Internet.” – AFP Relaxnews

How to Have a Simple Money Spell

Great Chinese Philosopher: Lao Tzu and His Habits For Well Being Quotes

Seven Foods that Flatten your Belly Fat
October 11: International Day of the Girl Child
How To Set Up a Budget
HEALTH: Bayezid Hossain, A 4 Year Old Boy From Ban...

Seven Foods that Flatten your Belly Fat
October 11: International Day of the Girl Child
How To Set Up a Budget
HEALTH: Bayezid Hossain, A 4 Year Old Boy From Ban...