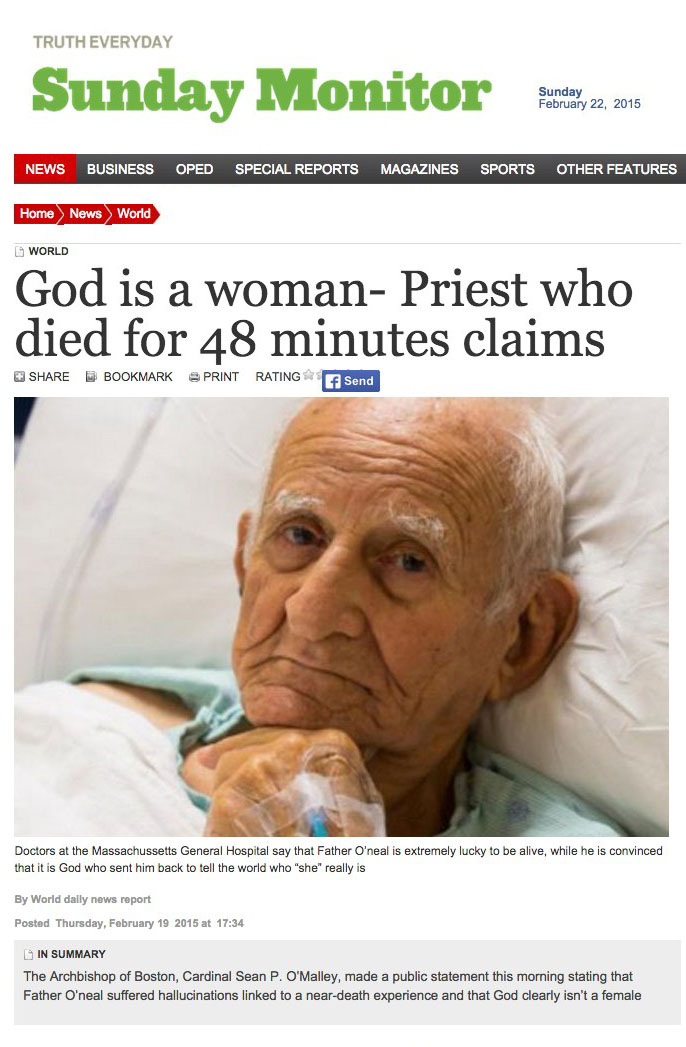 Patheos: A Catholic priest from Massachussetts was officially dead for more than 48 minutes before medics were able to miraculously re-start his heart. During that time, Father John Micheal O’neal claims he went to heaven and met God, which he describes as a warm and comforting motherly figure. 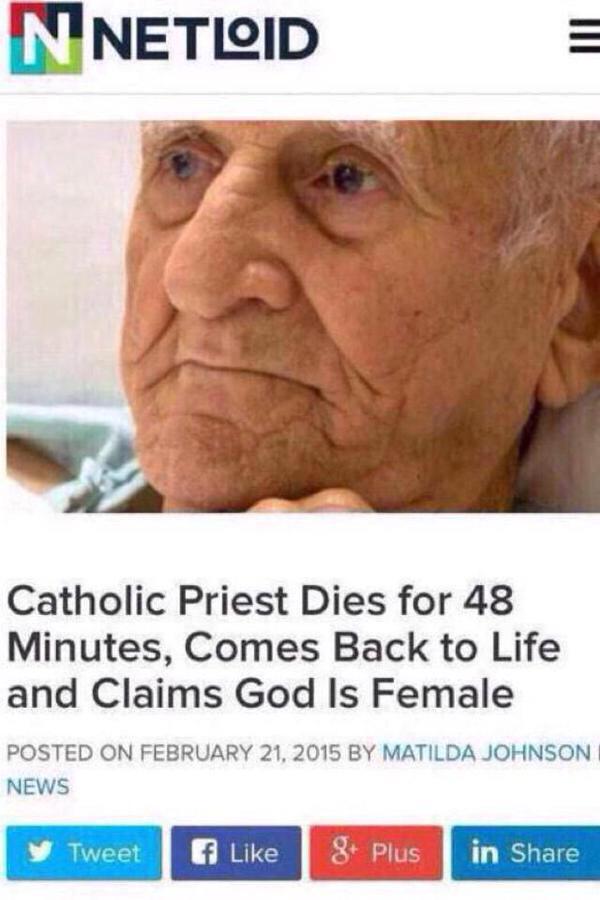 The Blaze: The story of the Catholic priest who supposedly died briefly and saw a female God has gained massive traction online, sparking debates on Reddit and getting picked up by everyone from the Dallas/Ft. Worth radio station KVIL-FM to viral news sites such as Inquisitr.

Yet the story does not appear to spring from any news outlets close to Boston, Massachusetts, where the priest was reportedly working.

Instead, the “story” was first reported by the Daily Monitor, a newspaper based in the African nation of Uganda.

Why would a remote African nation be first to an American faith story?

Because it pulled the tale from the World News Daily Report, a “satirical” website.

To add insult to injury, the images of “Father O’Neal” that accompany the stories appear to be stock photos (as Reddit user NewdAccount pointed out), not pictures of an actual priest.

It seems this story is another bogus tale in need of debunking, like the Sandy Hook conspiracy theory or the fake report of a military coup against the Obama administration over the revelation of an alleged Colin Powell affair.

The Patheos: It is a hoax, a falsehood that was (probably) designed to attract cheap clicks. There is no 71-year-old Father John Michael O’Neal in Massachusetts whose heart failure required hospitalization, and who met God during a 48-minute detour through heaven.

If you go to Shutterstock and search for “old man in hospital bed,” this photo is among the top results: 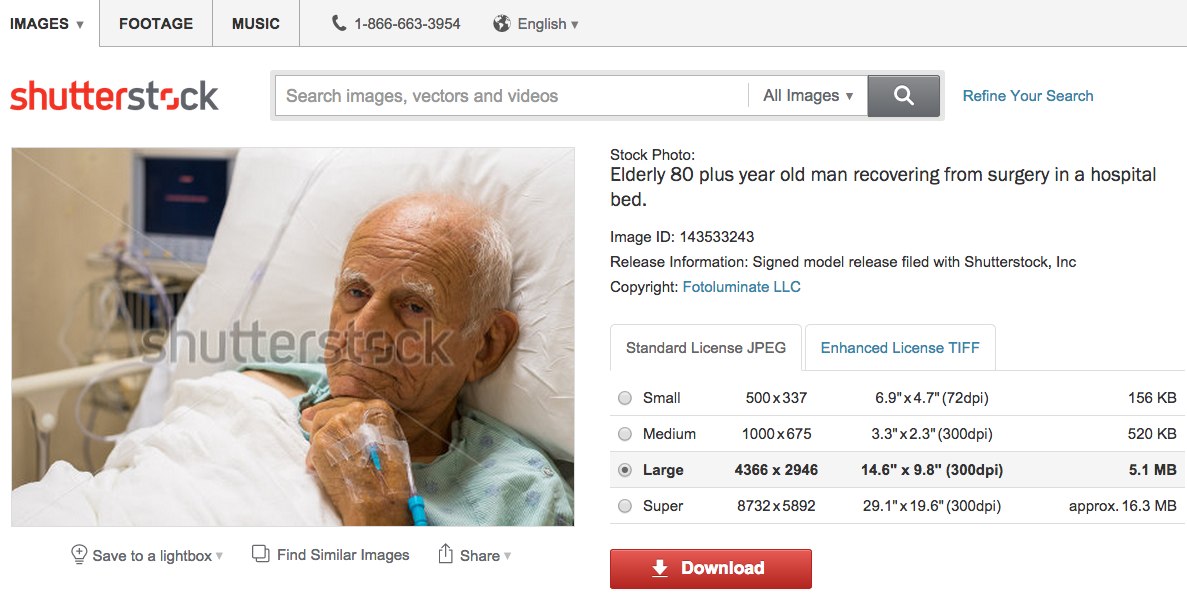 You can find the same image on stock-photo sites like Dreamstime and Photolia.

Since then, the tale of “Father O’Neal” was initially picked up mostly by African news media with low news standards, such as Nigeria Tell, Spy Ghana, and Uganda’s Sunday Monitor (whose motto is “Truth Everyday”). From there, it migrated and multiplied to lots of other (perhaps accidental) bullshit peddlers, from India Today to KVIL, a CBS Radio affiliate in Texas.

I would’ve thought that religious life contains enough real absurdities to quash the need to make up additional ones.

Feast your eyes on one of the most fatuous nonpologies ever. After she was informed that her post about Father O’Neal is based on a lie, Catholic blogger Bridget Mary Meehan wrote:

According to a recent media update, this story is false, but I believe if it hasn’t yet happened, it truly will! Someone once said: “all stories are true some actually happened.”

Because, you know, fuck the facts.

Psychology Today:  What makes this goofy tale psychologically interesting is that many may see the alleged femaleness of God as that which was hoaxed. Had there only been a faux news story claiming a remarkably long duration of clinical death no one (I think) would have taken the trouble to dehoax it (with or without a claim of having met father God). Reported post-death experiences including a meeting with the He-God are sometimes dehoaxed, but not as vigorously. Those who believe in a He-God feel reassured and those who do not feel indifferent or amused.

Those who go to the trouble of dehoaxing the She-God story are (I think) doing so out of fear that if the story is believed it will detract from the core belief in the masculinity of God. Inasmuch as these individuals can convince themselves that their dehoax was successful, they will feel (I think) reaffirmed in their belief. Inasmuch as this belief is one that lacks any evidence, one might say that this belief itself is a hoax. It follows that the dehoaxing of a claim that challenges a belief that has no basis amounts to a rehoax.

Consider this analogy. A group of UFO enthusiasts has decided that our alien visitors are green. They must be green and they can only be green. Their greenness is dogma. It is not negotiable. Now a report of a blue-alien sighting surfaces. The green group scrambles to dehoax this claim. They say it is unreliable. Weather conditions were bad during observation, or better yet, a member of the blue-alien group has defected and confessed to the hoax.

The question is whether the dehoaxing of the blue claim reinforces the belief in the green claim. Will the dogma of green aliens be rehoaxed? And if it is, are we dealing with a logical fallacy? I think we are, but the structure of the problem bears some resemblance to Hempel’s paradox, which concerns a similar type of inference, which is not illogical.