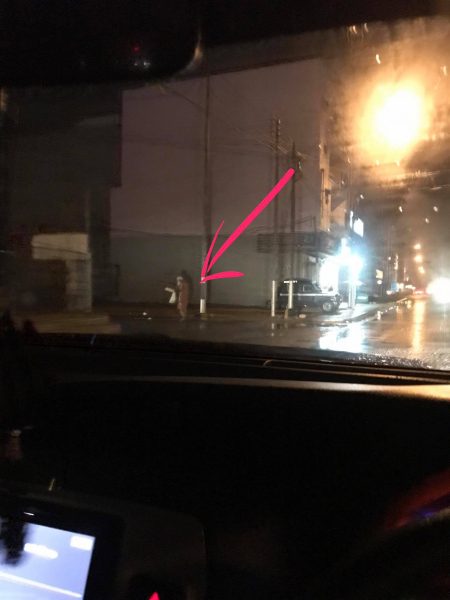 The epitome of the story is that there are many people who are working hard to survive instead of begging. These are the real people who needs to be supported. And there are people going out of their way to help somebody else which is not something one comes across often, but to conclude that they do not occur would be equally misleading. And this was proved when an old father met a good samaritan in an unexpected place.

Met an old father named Baba Hameed from Karachi, Pakistan who believes in earning money in a dignified manner rather than begging and the good samaritan Engineer Mohammed Usman.

A man was standing in the rain at 2:00AM selling flowers. While an amazing story of kindness and devotion, it is just one of the many thousands of examples of how parents work hard for their children everyday. Hameed’s story is the story of all our parents. Image As If I Have Eaten FB

We often take for granted how hard our parents work for us. Their devotion is one of humanity’s universal principles.

Here is the story of the unconditional love of an old father named Baba Hameed who was selling jasmine garland on a rainy 2am for his daughter’s wedding.

On July 14th in Pakistan, Muhammad Usman, an engineer, was driving down a deserted road at 2:00AM. It was raining hard, and those who were still out were rushing home.

However, a man on the street caught Usman’s eye. He was an older gentleman who was waiting on the street selling wares. He did not have rain gear, nor did he have an umbrella.

Concerned, Usman parked his car a few blocks away, and then approached.

The man, Baba Hameed, was selling jasmine garlands to passersby. However, business was not so good; it was 2:00AM and raining heavily—no one stopped to buy the garlands.

Usman took the man for a beggar and offered to buy Hameed dinner. To his surprise, Hameed immediately accepted the offer and the two retired to a local Subway.

Over a sandwich and tea, Hameed, drenched from head-to-toe, relayed his story.

Usman took the man for a beggar and offered to buy Hameed dinner. Image As I Have Eaten FB

He was out in the rain because of his daughter, Hameed told Usman. She will be be married at the end of July and while he had saved up some money for her wedding, he was still short of 50,000 Pakistani Rupee’s (just under $500).

Hameed only makes around 200-300 PKR’s ($2-3) each day and with the wedding date looming he needed to make extra money.

“How can I go home until I earn my targeted amount?” Usman relayed Hameed’s words in a Facebook post.

Hameed was trying to raise extra money to pay for his daughter’s wedding. Image

Usman was touched by this father’s devotion. On top of paying for the meal, Usman   with his friend Usama Bin Ahmed run a page called , As If I Have Eaten, that seeks to help people, posted the story on July 16, and it went viral within days. Within a matter of two days the required amount was collected and given to Baba Hameed. Speaking to indianexpress.com Ahmed said, they are not any organisation, but “just normal citizens who do whatever we could for the society.” And they indeed have.  Not only that, but he also offered to give the location where people could find Hameed if they wanted to buy his garlands.

After sharing a meal with Baba Hameed, Mohd Usman took a flower garland from Baba Hameed so as to not hurt his self-respect. Image As I Have Eaten FB

As If I Have Eaten

On Friday’s night at 2:00 AM when it was raining hard and everybody was rushing towards home. An old man standing at the start of “Khayaban e Ittehad” road was trying his best to sell the Jasmine garlands. I parked my car some meters away. While looking at him few questions raised in my mind.
Instead of going back to home, Why is he getting wet in the rain? Don’t he knows its 2:00 AM?
No car was stopping near to him due to late night, bad weather or perhaps some other reasons, But he was still trying to sell the garlands. Why?

I decided to chat with him. Prior to initiate the conversation, I went in a Subway (which was just behind him) and asked the staff if they can allow that old man to dine in? They said with a welcoming gesture “Why not”.

Then I went back to the old man and asked him Me: Khana khaya Baba?” (Have you took the dinner?)
He: “No”
Me: Can you please come and have dinner with me?
He: ( Surprisingly ) Yes, Where? (Too much hunger made him saying yes in no time).
Me: There, just at your back.

After entrance he sat at the corner, may be he was shy and his expression was showing that he never expected to dine in there.

He was wet, clothes were torn and start shivering due to AC cooling. I asked Subway to turn off the AC and they did so, there was only us as a customer ).

We sat and I asked Subway waiter to make a perfect meal for Baba. So that I can talk to him.

Upon asking about him, He said.

My name is Hameed. Nowadays I am trying hard to arrange some amount for my only daughter’s marriage for which I am in short of 50,000 PKR. Her marriage is planned to be held in the end of this month.

He further said ” My take home daily wage is 200 to 300 PKR and How can I go hone until I do not earn my targeted amount. But now I am worried as marriage date is very near and I have to do lots of things.

I was getting goosebumps as i was listening to him.

Well at that time i did whatever i could do. If anybody who wants to help can directly approach him. You may easily find him at starting of Khyaban e Ittehad road near Subway. OR you may contact us on our below mentioned page. Click on the below link and like our page. “As if i have eaten.”
https://www.facebook.com/AsIfIHave/

10 Most Cool and Beautiful Flowers In The World

“When I Look At You” by MILEY CYRUS
Helen Abdulla: Kurdish Shakira’s Anti-ISIS ...
NATURE: The Beauty of Succulent Flowers (2)
TRAVEL: Tuscany , Italy and Some Beautiful Destina...

“When I Look At You” by MILEY CYRUS
Helen Abdulla: Kurdish Shakira’s Anti-ISIS ...
NATURE: The Beauty of Succulent Flowers (2)
TRAVEL: Tuscany , Italy and Some Beautiful Destina...