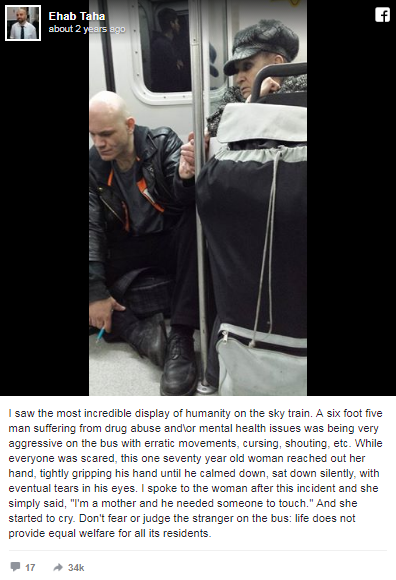 The two true stories of kindness that will melt your heart

One is the story of a Stranger helped single mother when her car broke down – he had a single request in return that made her burst into tears and the other one is about a Scary Bald man starts screaming and cursing on subway, then 70-year-old lady’s kind act brings him to tears

We’ve all reached our breaking point when it seems like nothing will ever go right again.

Tawny Nelson is the mother of four beautiful little girls, and for that she feels blessed. But life has been hard since her ex left her and she became a single mother. One one rainy day, bad became worse and she was just stuck. 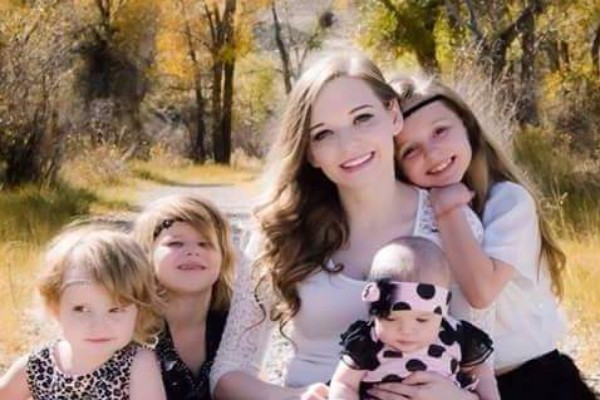 Nelson’s only mode of transportation was her truck, and “the truck was a mess.” She had a flat tire that she constantly needed to refill with air, the driver-side window motor was dead, and the truck needed a new alternator belt. So she never drove unless she absolutely needed to.

“The other day we desperately needed to go to the store. So we loaded up and drove to the Winn Dixie about 9 blocks away,” she wrote. When they got out of the store, it was already dark, and they were caught in the pouring rain.

She loaded her kids and groceries into the car and then got in the driver’s seat.

“Tried to crank it….nothing. No click. Nothing,” she said. One of her girls had accidentally left a light on, and the car battery was dead.

Unfortunately, her phone had been disconnected, and she had no family she could count on—she was stuck in the pouring rain. She tried to figure out what to do.

She got back out to pop open the hood and make sure the battery hadn’t come loose. That wasn’t it. She asked people passing by if they could help jump the battery, but didn’t even get a response.

“I must have asked more than twenty people in the course of two hours for a jump. They all ignored me,” she wrote. “Not even a no. Just acted like i didn’t exist.”

After hours of desperately seeking aid, the whole family’s nerves were fraying.

“My 5 Year old was melting down. My newborn SCREAMING, my two year old crying she was hungry, and my oldest desperately trying to help.”

“I was bawling and felt like the worst Mom ever.”

Nelson was emotionally exhausted when the most unexpected thing happened. The mother heard a  knock on the passenger window and looked over to see a standing elderly man with a cane and bad limp. When she opened the door, he handed her a plate of chicken strips and biscuits from the nearby deli and bottles of water and told her to feed herself and her girls.

She took it, stunned, and he said:

“Feed those babies and yourself young lady. I have a tow truck on the way and my wife will be here shortly to take y’all home.”

Sure enough, his wife pulled up not long after, and the tow truck arrived, and they were all taken home.

The 74-year-old man’s kindness didn’t end there—the next day, he returned to Nelson’s home with a mechanic who replaced her battery and alternator and fixed her truck window.

“The elderly gentleman then left and did not return. When I asked what I owed the mechanic and if I could make payments he smiled telling me the gentleman had paid for all of it,” she wrote.

Then the mechanic told her the gentleman only wanted one thing as payment. The only payment thegentleman had asked in return? “To never give up and keep being an amazing mom,” Tawny wrote in a Love What Matters post.

Nelson was moved to tears by his compassion.

“I’ve never cried so hard in my life. Things had been absolutely awful. More so than I care to explain,” she said. “And without knowing us or our situation this kind man helped us in ways he will never know.”

“What he did revived my faith when I was falling apart. But he wouldn’t even take a hug. I’ll never be able to thank him. But I certainly hope one day I can do what he did for me for someone else,” she wrote.

She told her story to reporter Frank Somerville of KTVU, who shared it on Facebook by prefacing it with, “I swear I got chills when I read what happened next.”

Somerville was inspired by the story, and he hoped that by sharing it, the elderly gentleman would see Nelson’s gratitude and the impact he had made.

“Someday I’m going to do something like that,” Somerville wrote. “#StayKind#GoOutAndMakeADifferenceToday”

“To update you since the story went viral, she had to sell her truck and leave everything behind to move back here in Wyoming. Since moving back she has struggled to stay on her feet.” – Go Fund Me

A SCARY MAN START SCREAMING AND CURSING ON SUBWAY, THEN 70-YEAR-OLD LADY’S KIND OF ACT BRINGS HIM TO TEAR

Life is rarely smooth sailing, and we all find ourselves in rough seas from time to time; times when we are feeling down and are in need of someone to comfort us.

An elderly woman’s kind gesture to an agitated man on a subway train has warmed the hearts of thousands online.

Ehab Taha, 26, a man from Surrey, British Columbia, was recently sitting on the train when he witnessed “the most incredible display of humanity.”

Ehab was 26, was riding the train from Vancouver to Surrey in British Columbia on January 28, 2016 when he saw an elderly woman’s act of kindness. Within the crowded train car emerged a towering six-foot-five bald man who was clearly suffering from drug abuse and/or mental health issues. The man’s behavior was disconcerting for the other passengers; he was being very aggressive, his movements were erratic, and he was cursing and yelling loudly without provocation. He held a pen in his hand, which he easily could have used as a weapon.

While everyone sat in silence and fear — unsure of what to do or how to react. The passengers on the train, Ehab included felt increasingly uncomfortable as the situation continued, with the man’s behavior appearing to be the result of substance abuse or mental health problems.

But just as Ehab was thinking about moving away from the man, who was intimidating in size on top of his concerning behavior, he witnessed another passenger do something extraordinary.

‘While everyone was scared, this one seventy year old woman reached out her hand, tightly gripping his hand until he calmed down, sat down silently, with eventual tears in his eyes,’ Ehab later shared on Facebook.

‘I’m a mother and he needed someone to touch': Heart-warming moment an elderly woman held the hand of an aggressive and ‘scary’ train passenger touches thousands. Source Daily Mail Image Little Things

Ehab later told Today.com that after 20 minutes of sitting in silence, gripping her hand, the man eventually got off the train and said ‘Thanks, grandma’ to the woman as he left. Ehab explained that after 20 minutes in silence, the man left the train, saying ‘Thanks grandma’ to the woman as he left

After snapping a photo of the touching moment, Ehab spoke to the woman about the incident. She revealed something that everyone should hear…

‘I spoke to the woman after this incident and she simply said, “I’m a mother and he needed someone to touch.” And she started to cry.’

He added: ‘Don’t fear or judge the stranger on the bus: life does not provide equal welfare for all its residents.’

He later posted a photo of the moment on Facebook, showing the bald man in a leather jacket slumped on the floor of the car looking down as he gripped the seated woman’s hand.

The story he shared with the photo quickly began being reposted – and to date has been shared over 31,000 times.

‘I was hesitant to take their photo at first because I wanted to respect their privacy, but I decided to go through with it because I want to remember the moment for my memory,’ Ehab told Today.com.

‘It’s incredible to see the impact a simple human touch can have on someone. Instead of fearing people, we should reach out and help them.’

There are a myriad of things the world could benefit from having more of. Kindness is one of them. When you are a kind person, you’re not only helping others, you are helping yourself, too. There’s substantial scientific evidence that being kind makes you — and others around you — happy.

In a study conducted by Dr. Sonja Lyubomirsky, psychology professor at University of California, Riverside, students were assigned to do five random acts of kindness per week for a period of six weeks. At the end of the study, the students’ levels of happiness had increased by 41.66 percent. Being kind had a profoundly positive effect on happiness.

“Love and kindness are never wasted. They always make a difference. They bless the one who receives them, and they bless you, the giver.”
-Barbara de Angelis

HEALTH: Benefits, Dosage and Side Effects Of Appl...
“The Paradise lies beneath the feet of your ...
AN ANGEL Quotes
Adorable Animal Mothers Photos

Nigeria: The Land of Twins