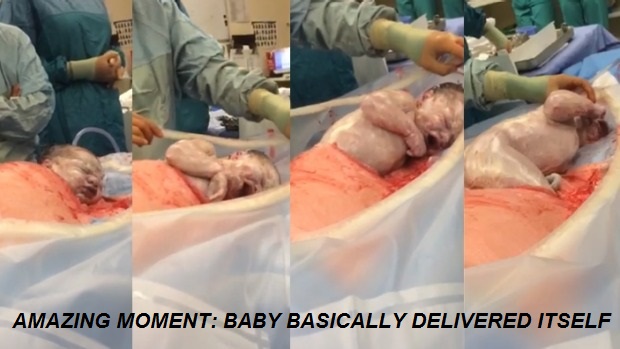 AMAZING MOMENT: Watch the amazing moment a baby boy ‘walks’ from his mother’s stomach in the latest birthing trend of ‘natural caesareans’ another known as ‘GENTLE C-SECTION’

Decisions around how to deliver a child are among the toughest faced by expectant parents.

And while mums have long had to choose between either a natural vaginal birth or a caesarean, there is now another way.

The latest trend to emerge among mothers is a mixture of both types of birthing methods.

Surgeons have captured some incredible footage of a baby wriggling himself out of his mom’s stomach, head first, during a natural cesarean.

A video of Sarah Saunders’ ‘natural caesarean’ is all over the internet today, showing Sarah’s son (who was actually born last year, but the video’s making the rounds now) wriggling his way out of her womb.

A new method of caesarean section deliveries is on the rise, believed to give the baby a less distressing entry into the world and assist with mother and child bonding.

In May, 2016, another video of a mother undergoing a natural caesarean gained worldwide attention.

Sarah Saunders, from Devon,United Kingdom has posted a video of her ‘natural caesarean’ on YouTube. Experience to cherish: In Ms Saunders’ own words: ‘If you are unable to give birth ‘naturally’…having a natural caesarean is the next best thing!’ Source: dailymail.co.uk

In the clip, filmed at Torbay Hospital’s maternity ward, Ms Saunders’ son effectively ‘delivers himself’ by wriggling his body out of his mother’s womb.

Doctors and nurses look on as the newborn slowly emerges, removing his head followed by his shoulders and then the full body.

The baby’s head emerges through the cut Source: Mirror.Co.UK

Ms Saunders wrote on the viral Youtube clip : ‘If you are unable to give birth naturally’…having a natural caesarean is the next best thing!’

Ms Saunders writes on the video that she has shared it on the Internet because it is a ‘birth experience I will cherish forever’.

Natural caesareans are becoming increasingly popular, because they are said to give babies a slower and calmer entry into the world.

The baby’s head popped out first through the opening made atop the woman’s stomach. The baby is then left to wriggle and push its way out of the womb on its own.
Slowly, the baby’s eyes, nose, mouth and ears emerged. The aim of natural cesarean section was to mirror a vaginal birth as closely as possible.

The procedure allows the baby to partly emerge from the womb by itself rather than being rapidly removed by doctors and ‘whisked away’ from the mother.

Science stuff: As Daily Mail reported earlier this month, it can take up to four minutes for the baby to be born during a natural caesarean, before it is placed on the mother’s chest, which is thought to help bonding Source: dailymail.co.uk

Doctors make an incision into the womb and bring out the baby’s head. It is then left to manoeuvre its shoulders out alone in a way that is similar to natural birth.

As Daily Mail reported earlier this month, it can take up to four minutes for the baby to be born during a natural caesarean, before it is placed on the mother’s chest, which is thought to help the bonding process.

Many of these stages are visible in Ms Saunders’ experience.

She remains extremely calm as a tiny head slowly becomes visible, before the baby boy starts crying and wriggles his way out of her womb by himself.

People have also been quick to comment, describing the birth as ‘beautiful’ and ‘amazing’. Consultant midwife Belinda Green, who is leading the trial, told The Daily Mail in May: ‘So many women say the bond with their baby is stronger after a skin-to-skin caesarean, and there is evidence to suggest it reduces a number of complications after birth.

‘The demand for this type of birth continues to increase and I am constantly being contacted by women who want it.’

Jenny Smith, a senior midwife at the Queen Charlotte’s and Chelsea Hospital, said: ‘It is about the mother. After the incision is made the mother is able to see her little baby wriggle out. It is a special moment that is missed otherwise.

‘The baby remains in the abdomen for up to four minutes and the mother can look at it, see its little face and when it wriggles out it is the parents that first determine the sex.’ Sarah Saunders her partner Chris and their baby Leo who was born in a ‘natural’ caesaren Source: dailymail.co.uk

Last April, 2016, one mum has shared amazing footage of the caesarean birth in which her baby boy is seen “walking” out of her womb.

The baby boy appeared to be “walking” out of his mother’s womb in this gentle caesarean.Photo: Facebook Source: essentialbaby.com.au

The video was posted on Facebook by the UK woman’s doula friend and has been viewed more than 2.4 million times over the past two days. Online sensation: Childbirth educator Sophie Messager posted the video on behalf of a friend and described the birth as ‘gorgeous’ Source: dailymail.co.uk

Ms Messager said her friends wishes for the birth of her son were as follows:

“On top of that, the anaesthetist lifted the mother’s shoulders and someone held a mirror to help view the birth,” Ms Messager wrote.

TRAVEL: Interesting Facts About Sahara Desert
HAPPINESS – John Lennon
Treatment: Could depression be treated with aspiri...
Pregnancy: There is such a special sweetness in b...