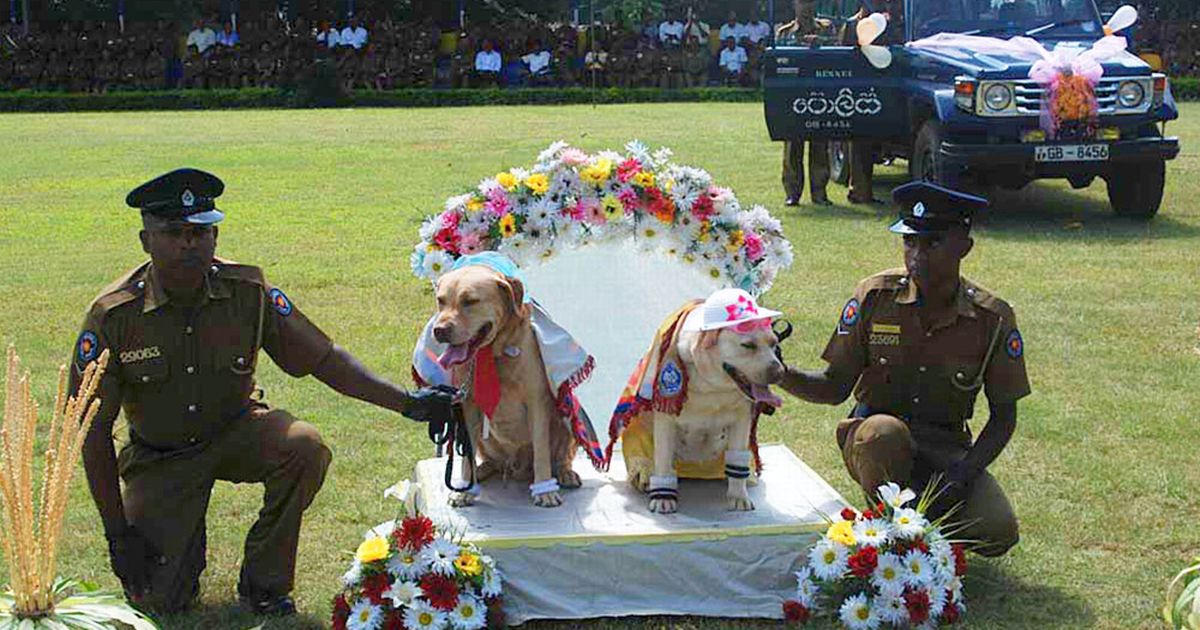 COLOMBO, SRI LANKA— Sri Lankan police apologized Tuesday for holding a group wedding for dogs trained to detect explosives and drugs after the country’s culture minister condemned the event and demanded an investigation.

Nine pairs of police sniffer dogs dressed in shawls, hats and socks were placed on a decorated platform like those used in traditional Buddhist weddings in the ceremony Monday in the central town of Kandy.

Their marriages were registered by an official in the presence of a crowd of veterinary surgeons, medical doctors, top police officers and the public.

Local television showed the dog couples later being driven away in a decorated police jeep for their “honeymoons.”

Culture and Arts Minister T.B. Ekananayake said it undermined traditional wedding rituals and should be strongly condemned. He called for an investigation.

Police spokesman Buddhika Siriwardena apologized for any damage to the country’s cultural heritage, saying the goal was to breed sniffer dogs domestically.

“This program is aimed at breeding dogs accustomed to local weather and food, thereby saving money,” Siriwardena said in a statement, adding that in 2011 the police department spent $500,000 importing such dogs from the Netherlands. 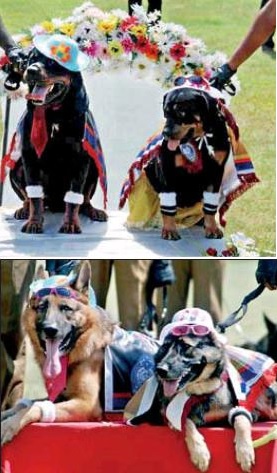 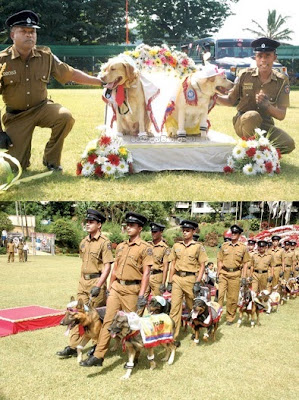 Sri Lankan policemen hold a pair of sniffer dogs during a wedding ceremony of nine pairs of police dogs in Kandy, Sri Lanka.

The Wonders of Nature on the Human Body: Painting Fluorescent Landscapes

RELIGION: ‘Is it permissible for Muslims to celebrate Valentine’s Day which has a pagan origin’?

Secret of Saving Money, How to Cut Expenses and Ho...
Tips: Pregnancy Stretch Marks Treatment and Home R...
TRAVEL: Astana, The World’s Weirdest Capital...
Why fit in when you are born to stand out..with 2...

Secret of Saving Money, How to Cut Expenses and Ho...
Tips: Pregnancy Stretch Marks Treatment and Home R...
TRAVEL: Astana, The World’s Weirdest Capital...
Why fit in when you are born to stand out..with 2...