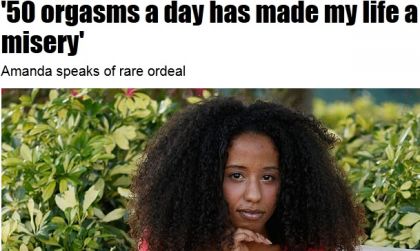 Woman, 24, suffers from 50 orgasms a DAY due to rare condition that leaves her constantly aroused

A 24-year-old woman has up to 50 orgasms a day due to a rare medical condition which leaves her constantly aroused.

Her uncontrolled orgasms can be triggered by anything from riding in a car to a loud bass. 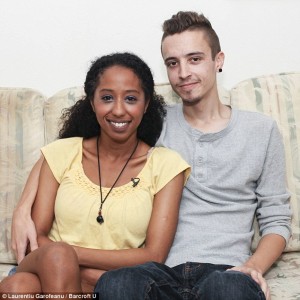 Amanda Gryce, with boyfriend Stuart Triplett, suffers from Persistent Genital Arousal Disorder – meaning she can orgasm uncontrollably up to 50 times a day

Miss Gryce said: ‘It can happen anywhere and sometimes I’ll have five back to back.

‘It’s not pleasurable – it has become like torture. I’ve been living with it since I was six.’

For years, she suffered in silence, too ashamed to tell friends or family.

She said: ‘I can have 50 orgasms in one day and five or ten within an hour of each other.

‘It happens when I’m with my friends or out in public and it’s very embarrassing.

‘It kills me inside. I just have to put on a smile and pretend that nothing’s wrong.’

Once at the point of despair, she is now turning her life around after finding love – and much needed medical treatment, after battling doctors who didn’t understand PGAD or how to treat it.

Miss Gryce said: ‘Since last year I’ve been on a quest to find out more about this condition.

‘It’s been one disappointment after another thanks to the reluctance of some doctors to see this as a valid condition.’

But after making contact with pelvic pain expert Dr Robert Echenberg, she hopes she has found a way to control her orgasms.

Miss Gryce said: ‘After seeing Dr Echenberg I found there are things which can reduce the intensity of the orgasms – even though they are still constant.

‘I take medication to numb the areas and do exercise to try to take me mind of it.  Taking control over the disorder rather then it controlling me is a dream come true.

However, under doctors’ orders, Miss Gryce and her boyfriend Stuart Triplett, 22, must abstain from sexual contact.

The couple met seven months ago on a dating website. And despite previously having sex to cope when her symptoms were bad, she must now stay celibate.

She said: ‘It was difficult at first to explain my disorder to Stuart. I wasn’t sure when was the right time or how he was going to react.

‘But he’s so supportive, he completely understands and he is just my rock.

‘Stuart’s really been holding me back as far as the intimacy goes – he actually has to remind me we’re not allowed to do anything.’

Recently Miss Gryce visited physical therapist Gina Parsonis in Clearwater, Florida, who examined how her body reacts to the condition.

She also performs meditation and stretching excersises to keep her episodes under control.

Now Miss Gryce and Mr Triplett hope to move in together and plan their future.

He said: ‘I suppose you could say it was love at first sight with Amanda. Dealing with her symptoms at first was kind of a challenge, because I didn’t quite know how to approach it the right way.

‘As far as the sex ban goes, it was kind of hard to cope with but then I realised that it’s important to her health that she doesn’t do this so I’ve been able to abstain as well as her.

‘I’ll continue to do whatever I can to support her.’

Miss Gryce added: ‘This past year has been amazing. Meeting Stuart and Dr Echenberg, I finally feel like I’m going to have a more normal life – and eventually a positive sex life.’

WHAT IS PERSISTENT GENITAL AROUSAL SYNDROME?

Dr David Goldmeier, an expert on sexual medicine at Imperial College in London said: ‘Persistent genital arousal disorder is a newly recognised condition, where the sufferer complains of long periods of genital arousal that are not associated with sexual desire.

‘PGAD sufferers experience intrusive, unsolicited and spontaneous genital arousal that can be unrelenting. This arousal can persist for hours, days or even longer.

‘This can be highly distressing for a woman and despite attempts to relieve it with sexual activity or orgasm, this often doesn’t help or can worsen the symptoms.

‘Spontaneous genital arousal is quite common but it’s those women who can’t control the arousal which is uncommon.

‘I see around 20 women a year with this condition, it may be as common as one in 100 we just don’t know.

‘Sometimes it may resolve on its own, there is no cure but there are a number of ways to manage the symptoms such as meditation and pelvic floor exercises along with pain medication for the patient.’

Photos of the Kid and the Pet: What’s in a F...
Kindness is the sunshine in which virtue grows
Go Forward to the Right Path and Never Go Back
Lives Like Garbage: Children with Birth Defects Ab...

Pregnancy: There is such a special sweetness in being able to participate in creation. (with beautiful pic of pregnant women)